'Baby Shark' Has Made Millions for This Korean Family

Michael Qu, from Northern Virginia wearing a Baby Shark costume watches the World Series Game 7 on a big screen with other fans in the rain just a block from Nats Park at The Bullpen on October 30, 2019 in Washington, DC. The Washington Nationals are facing off against the Houston Astros after forcing a Game 7 in the World Series in Houston last night and fans are showing up in droves to cheer on the Nationals in and around Nats Park in South East, D.C.
Samuel Corum—Getty Images
By Yoojung Lee / Bloomberg

It was practically the anthem for this year’s World Series, with tens of thousands of Washington Nationals fans clapping in unison and belting out “Baby Shark, doo-doo doo-doo doo-doo.”

In Lebanon, it became a rallying cry after a video of protesters singing to soothe a frightened toddler went viral. And in many other places, the earworm has drawn derision, with late-night comedian Jimmy Kimmel suggesting its creator should be jailed for life.

To the contrary, the catchy tune about a family of sharks has become so lucrative that the Korean family behind it is now sitting on a rapidly growing multimillion-dollar fortune.

Kim Min-seok co-founded closely held SmartStudy Co. in 2010, and five years later its children’s educational brand, Pinkfong, released “Baby Shark.” His father runs Samsung Publishing Co., which also owns part of the startup. The family fortune, based on stakes held by Kim’s immediate relatives in those two companies, is now about $125 million — much of it thanks to the song.

Shares of Samsung Publishing soared 89% the week the World Series began as local media reported on the song’s surging popularity among U.S. baseball fans. Nationals outfielder Gerardo Parra began using it as his walk-up music, leading to crowd singalongs with shark-jaw gestures, scenes that echoed across TVs as the team broke out of an early season slump. They rode the wave all the way to the championship.

The Kim family owns 63% of Samsung Publishing, which in turn owns 21% of SmartStudy. Kim also directly owns a 23% stake in the startup, which Bloomberg valued by comparing it to four publicly traded peers.

Kim, 38, hardly set out to write a hit global song. After working at gaming companies including Nexon and developing content for kids at Samsung Publishing, he co-founded SmartStudy to focus on the growing market for educational content for smartphones. 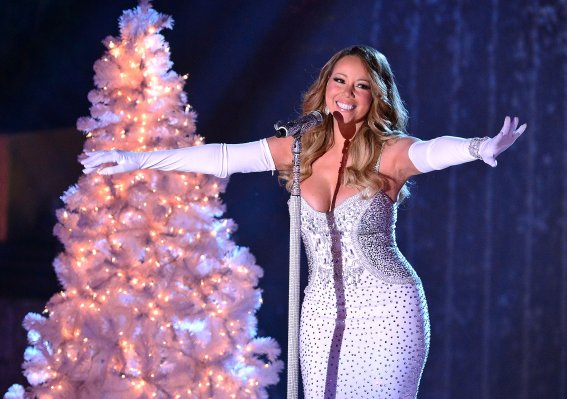 How Mariah Carey's 'All I Want For Christmas Is You' Became the Holiday Gift That Keeps on Giving
Next Up: Editor's Pick