Brittany Wyatt, who goes by Bee, and her husband Kevin had been living together for a few years when they had the fight that nearly finished them. Bee needed to buy a car, but her credit had been demolished by her divorce, so she asked then boyfriend Kevin to guarantee the loan. He declined. She took this as a sign that he didn’t trust her. To Kevin, however, it was just a sign that he didn’t believe in loans. He’d never taken one out.

Even after he agreed to be a guarantor, the Melbourne, Fla., couple still had money squabbles. “We couldn’t match up with money,” says Bee, 33. They combined bank accounts when they married but have often differed over how their funds should be used.

In early 2018, they decided to watch a video of a seminar called Money & Marriage, a three-hour event that is half couples therapy and half financial advice. None of the information it conveyed was revolutionary (communicate, budget together, don’t blame, be grateful, plan). For the Wyatts, however, it was transformative. “We’d been talking about everything that they spoke about for a year or more,” says Kevin, 32. “But for some reason, once you sat down and watched it, like, ‘Oh, man, this totally makes sense. We’re doing this wrong.'”

Money & Marriage is organized by Ramsey Solutions, a faith-based financial-advice group started in 1992 by the wildly popular Dave Ramsey, who looks upon debt as approvingly as NASA engineers look upon oxygen leaks. In the first half, psychologist Les Parrott offers couples’ bonding skills and exercises. In the second, Rachel Cruze, Ramsey’s middle child, shares financial advice. Nearly all 20 of these seminars that have taken place since 2017 have sold out, she tells TIME. “The two comments we’ve been getting for over 25 years is ‘How do I get my spouse on board?’ and ‘Why didn’t they teach me this in high school?'” says Cruze. “We just always knew that there was a tension within people’s marriages when it comes to money.”

Ramsey Solutions is not alone in combining cash and coupling tips. There is a small but growing group of advisers who believe it is impossible to address people’s financial difficulties and personal struggles separately and who are trying to carve out a new field that addresses both at once. Academic institutions, including Kansas State University, the University of Georgia and Creighton University in Nebraska, are beginning to offer training and graduate certificates specifically in financial therapy, while others, like Florida State, have elective courses as part of a social-work degree. The Financial Therapy Association, a professional group formed in 2009 that puts out a peer-reviewed journal, now has 300 members, a 33% jump in the past year. It announced its first set of certification requirements in May.

“We were very opposite, Kevin having no debt, and me having debt, and we definitely fought a lot,” Bee Wyatt says of their relationship
Eve Edelheit for TIME

Although the discipline deals with all the ways people’s relationship with money affects their lives, businesses have become particularly interested in the couples space. The online finance company SoFi has teamed up with the wedding planner Zola. Northwestern Mutual has partnered with the Knot. John Hancock, the insurance giant, has an app for couples, known as Twine, to communicate about and plan their finances together, and there is a slew of smaller versions, including Honeydue, Honeyfi and Zeta.

Some of this activity may simply be an opportunistic search for new markets: marriage is increasingly becoming a habit largely practiced by the wealthy, and young couples are at a financial inflection point. But there is also a growing understanding that feuding about finances is one of the most common shoals upon which marriages founder. “Money does seem to be qualitatively a different topic that couples fight over than chores and in-laws,” says Jeffrey P. Dew, an associate professor in the School of Family Life at Brigham Young University. Partly, he says, that’s because of the different roles money plays in people’s lives. For some it means security, while for others it means adventure. “You get two individuals, and these meanings conflict,” says Dew.

Money has always been the unsightly toad that lurks in the marshiest parts of the marital-advice swamp. Sex and parenting are considered respectable subtopics to consult specialists about, but fiscal conflicts remain taboo. “Going to someone specifically for financial therapy is still a difficult boundary to cross,” says Ed Coambs, a financial planner who trained as a marriage and family therapist after he noticed couples coming to him for help with budgeting but lacking the “relational strength” to execute their plans. In fact, he too hid debt from his wife. “The patterns of dysfunction around finances are very similar to the way sexual intimacy may leverage or break down a couple,” he says, “because of the role pleasure and pain play out around money.”

And yet a longitudinal study in 2012 found that marriages in which money was the biggest point of friction were more likely to dissolve than marriages in which other issues loomed larger. Some analyses suggest that spending spats are the most common issue couples have. Other research disputes that but reports them to be the most repetitive and hardest to resolve. In March, a study in the scientific journal PLOS One found that perceived unfairness in the sharing of finances has a worse effect on marital harmony–and sexual frequency–than perceived unfairness in the sharing of housework. That makes sense, says Gretchen Peterson, a sociology professor at the University of Memphis and one of the study’s co-authors, because while couples don’t compare notes on money with others, they do have hard data. “You know how much money each person makes,” she says. “It’s harder to make that seem fair when in absolute numbers it’s not.”

It’s not just who’s making the money but who’s spending it that is often a sore spot. In Coambs’ practice, near Charlotte, N.C., couples usually adhere to the traditional model of a man providing the money and a woman disbursing it. Often, he says, the breadwinners feel taken advantage of and the caregivers feel criticized. “Too often, [money habits] are associated with personality and not with role responsibility,” Coambs says. “If you’re in the home, your job is to buy the groceries and the kids’ clothes. Does that make you inherently a spender, or is that a function of the role you are performing in your family? You have to help people tease through that.” Caregivers also feel exploited for free labor, he added, without appreciating that they have more control over their time than breadwinners.

Even as gender roles shift and there’s less income inequality within marriages, money remains a thorny issue. The increasing economic power of women–26% are the primary breadwinners among heterosexual American couples in which both partners are in the labor force–can chip away at the self-worth of young men who grew up with the model of a male-provider family. Studies have found that men whose wives outearned them were more likely to take erectile-dysfunction medication or have an affair, both of which researchers ascribed to a response to a perceived loss of status. Even when that doesn’t happen, financial stress can have a traumatic effect on couples. Bee married her first husband when she was 18. They bought a house in June 2007, just before the financial crash. The ensuing fiscal nightmare, she says, saw them fighting and declaring bankruptcy.

She also remembers standing in the grocery store as a child while her parents used a calculator to figure out what they could afford. So money, or the lack of it, provokes a strong emotion in her. “I think Kevin would feel like I was challenging him as a man, saying he wasn’t a good provider,” when they couldn’t pay bills, says Bee. As a result, she says, she would hide purchases from him, a subterfuge some financial advisers call “financial infidelity.”

The difficulties young people are having accumulating wealth might be another factor in the emergence of relationship-specific financial counseling. Household-debt balances have risen every quarter for five years, and delinquencies for student loans are higher than for any other type of debt. Sharp increases in house prices have put home buying in the too-hard basket. And the erosion of the manufacturing sector has left many young men struggling to find meaningful and remunerative work.

As people marry later in life, they’re unused “to having someone looking over their shoulder” at their spending habits, says Steve Dorval, CEO of Twine and head of innovation at John Hancock. The company’s app allows couples to share as much information as they desire, so they can, as Dorval puts it, “tiptoe into” transparency. On the app Honeydue, couples can use social-media-like comments, including emojis, to ask each other about recent expenses, perhaps to lighten any tension around the subject.

Of course, the idea that partners might have financial discord isn’t completely new; it’s been a topic in premarital courses offered by churches for years. But as young people move away from religion, other entities are picking up the slack. In April, Zola, the wedding-registry company, paired with online financier SoFi to offer newlyweds financial advice; the ability to open joint investment accounts; and the option to allow guests who aren’t feeling the napkin rings on the registry to pay down college debt or throw some cash toward other financial goals.

This trend inspired financial planner Richard Davey to co-create Marriage Money Bootcamp, an online lecture course for couples who want to figure out their finances without the faith stuff. The site, which launched in 2018, has a widget that lets people ask questions in real time, and the team has noticed that couples sometimes use it when they are clearly in the middle of a fight. Davey is now thinking of getting certified as a therapist as well. “Personal financial planning is not very complex. It’s the relationship piece that is tough,” he says.

The rationality of financial planning and the intuition of therapy aren’t necessarily a natural fit. But for couples who need a more human touch than an app can provide, a specialist in both might be what gets them to book an office visit. “In general, we’ve had more resistance from the therapy industry than we have from the financial advisers,” says Kristy Archuleta, who co-founded the financial-therapy certification course at Kansas State and is now an associate professor in financial planning, housing and consumer economics at the University of Georgia. “According to research, this may be because therapists tend to be money-avoidant themselves and they have very little training in it.”

Couples who are put off by an in-office therapy visit can opt for the revival-meeting style of the Ramsey events, which are full of brio and breaking into discussion groups and carefully chosen statistics. “When you agree on your money, you’re agreeing on more than just money. You’re agreeing on the goals and your fears and your dreams,” says Cruze.

Bee and Kevin were so thrilled to find a way to talk through their issues–and to budget–that they are taking their church’s offer of marital counseling more seriously. “By the end of December, we should be debt-free,” says Bee. “You know, we still disagree about what money gets allocated to what thing,” says Kevin. “But we work that out. I wouldn’t say there’s fights now. It’s just more of a heated talk.” 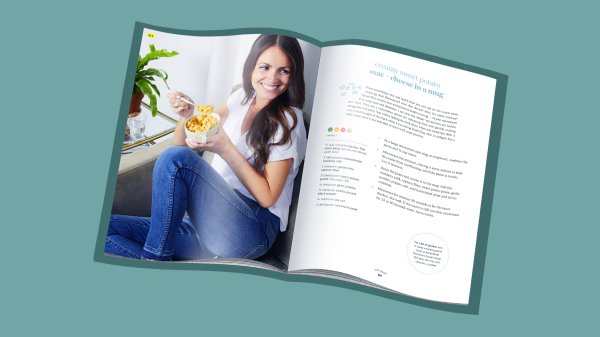 Why All Your Favorite Instagram Chefs Are Whipping Up Cookbooks
Next Up: Editor's Pick