The Search Zone for the Missing Jet Is Narrowing

A submarine built by Bluefin Robotics is lowered into the water by a systems engineer in Quincy, Mass., April 9, 2014
Scott Eisen—AP
By Charlie Campbell

The search zone for missing Malaysia Airlines Flight 370 is now at its most focused yet, as investigators continue to express hope that the hunt for the Boeing 777’s wreckage may soon be at an end, while admitting that serious challenges remain.

Angus Houston, who is coordinating the search in distant waters off Australia’s west coast, said Wednesday that he was “optimistic” that the wreckage would be found “in a matter of days,” and Thursday saw underwater sonar systems known as sonobuoys deployed in an attempt to collect more signals from the doomed aircraft’s black boxes.

“We are still a long way to go, but things are more positive than they were some time ago,” Australian Transport Safety Board chief Martin Dolan told Reuters on Thursday.

Two signals were heard by Australian navy vessel Ocean Shield Tuesday — for five minutes and 32 seconds, and then for around seven minutes — on top of two detections over the weekend.

Now a modified Royal Australian Air Force P-3 Orion surveillance plane is deploying up to 84 sonobuoys that can transmit data to search aircraft via radio.

“What we want to do is maximize the time that may still be left on those black box batteries so we will keep searching with the towed pinger locator,” Commander Mark Williams, of the U.S 7th Fleet, which is assisting efforts, told CNN.

“We’ve done an incredible job decreasing the search area to a pretty small, defined area. But with a side-scan sonar, which works pretty slowly and methodically, it’s still pretty big.”

If the batteries fail before the black box recorders are located — and they are already three days past their 30-day standard lifespan — finding the wreckage in water 2.8 miles (4,500 km) deep becomes much more arduous.

On Thursday the search for visible debris continued on an area narrowed to 22,000 sq miles (58,000 sq km) — slightly smaller than West Virginia — with up to 10 military aircraft, four civil aircraft and 13 ships operating about 1,400 miles (2,280 km) northwest of Perth.

Aircraft and ships reported spotting a large number of objects during Wednesday’s search, but only a small number were recoverable, and none confirmed to be from MH370.

Until wreckage is found, there can be no closure for families of the 239 passengers and crew. “Things look promising but it’s nowhere near the end until we find a bit of the airplane,” David Newbery, an aircraft accident investigator, tells TIME.

Some have speculated that the lack of wreckage may indicate the plane could remain relatively intact, although Newbery believes this more to do with unpredictable currents and not knowing where to look.

“Hitting water in an airplane is like hitting concrete, so if it was a controlled ditching it is conceivable that not many bits fell off,” he says, “but anything other than that and there’s inevitably going to be wreckage.”

MH370 vanished soon after departing Kuala Lumpur for Beijing early March 8 and investigators still have no idea why it flew so drastically off-course to apparently crash in the southern Indian Ocean. 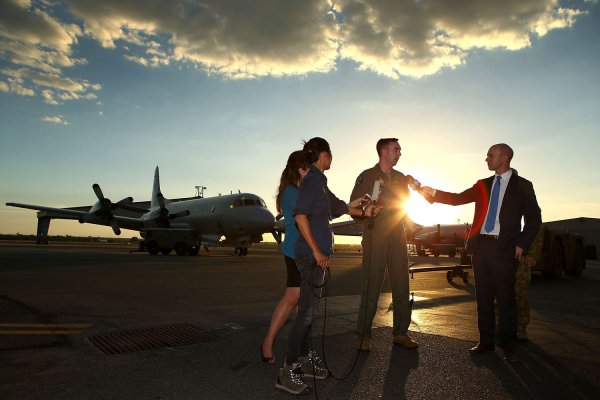 Missing Jet Could Be Found Within 'Matter of Days'
Next Up: Editor's Pick