The U.S. and China Need to Put Aside Their Rivalry and Focus on the Common Enemy: Climate Change

The U.S. worries that China has become a political and economic threat. China worries that the U.S. is attempting to constrain it. These concerns increasingly resemble a classic Cold War conflict.

Such security threats are misplaced. Trade wars and technology competition notwithstanding, there is one overarching global security concern that by its very nature should lead to collaboration and cooperation rather than Cold War antagonism: climate change.

We are today witnessing a devastating global crisis in the making. It is happening worldwide, even as climate change’s impacts are immediately felt locally, regionally, and nationally. Make no mistake—ferocious climate events are not just causing extensive physical damage and loss of livelihood—they are creating insecurities that will grow each year and subsume all other existing security fears.

In the U.S., the annual average temperature has increased by 1.8 degrees Fahrenheit from 1901 to 2016 and is expected to continue to rise, possibly doubling in just one or two decades. China’s official climate change assessment is even more sobering. As many as 641 of its 654 largest cities now experience regular flooding and Shanghai, one of the most prone to serious flooding, has already built 520 km of seawalls defending the city.

Around the world, climate change impacts could create destabilizing crises in migrations of climate refugees, water availability, and food production, as well as climate-related disasters from massive and intense storms to fire, flooding, and deterioration of air quality. More and more, climate change will dominate political discourse, economic activity, and people’s well-being.

The U.S. and China are vulnerable because both countries place such a high premium on security. Yet current responses about climate insecurity are minimal, particularly in the U.S. under the current administration. Instead, the U.S. is building walls to keep immigrants and climate refugees out, while heavily promoting fossil fuel development and undermining rather than encouraging decarbonization initiatives. In China, climate concerns have increased substantially in the past ten years and efforts have been made to reduce domestic coal production. Yet, China is also the leading investor in financing coal plants globally that are generating more than 5,000 MW of energy, according to Global Energy Monitoring.

Read more: How China can truly lead the fight against climate change

The U.S. and China have a special global responsibility with climate change. The U.S. has been the largest contributor historically to carbon emissions in the past 150 years and remains the largest per capita contributor today. China, meanwhile, is the largest emitter of greenhouse gases by volume. At the same time, the U.S., under the the Trump administration, is in denial about its role, while China, even as it focuses on decarbonization domestically, has not played a leading role globally through its external development policies.

Today, to make matters worse, the U.S. and China—through trade wars, technology disputes, and nationalist rhetoric—are creating a new Cold War environment. The future does not belong to globalists, Trump declared at the U.N., it belongs to patriots. Security, both countries assert, is a domestic priority. Yet, when it involves climate change, the Cold War-type environment precludes what is crucial in this period: global action, collaboration, cooperation, and Earth Care. If security is the goal for the U.S. and China, both countries are undermining that goal through their failure to work together, whether through sharing technologies, or dramatic shifts in energy, food, and development policies (jointly and globally pursued).

Such collaboration could extend beyond government-to-government relations to community and institutional connections, such as the initiative of the University of California at Berkeley and Tsinghua University to form a California-China Climate Institute. It could also involve grassroots collaborations such as those regarding sustainable agriculture programs and shipping emission reductions. And it could include major support and financing of alternative energy and decarbonization projects throughout the developing world, as those countries seek their own transition to a green development future.

The U.S. and China have the capacity to make their own countries more secure; even more importantly, they can make the world a more secure place. Most governments are not ready for the onslaught of severe weather events. When it comes to climate change, everyone needs to be a “globalist,” and a localist as well, to advocate for their own national security. 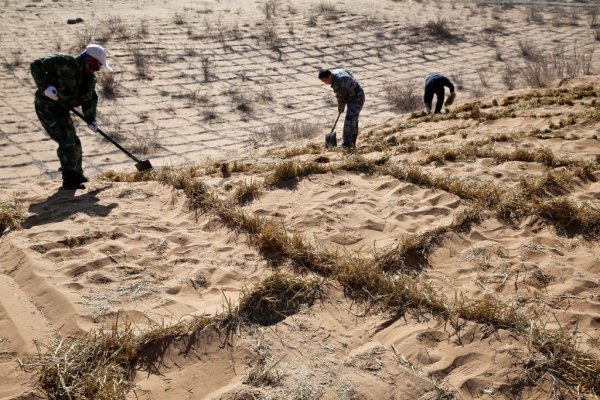 These U.N. Climate Scientists Think They Can Halt Global Warming for $300 Billion. Here's How
Next Up: Editor's Pick