Don’t tell the kids seeing Rio 2 this weekend, but the story line about the endangered status of the Spix’s macaw — the blue beauties voiced in this movie and its predecessor by Jesse Eisenberg and Anne Hathaway — is no cartoon fairy tale. According to Birdlife.org, the Spix is in severe danger of extinction, due to “destruction of the specific gallery woodland habitat on which the species apparently depended” and “the illegal live bird trade.”

In the 2011 Rio, that rapacious trade throughout Brazil’s rain forest led to the capturing of Blu (Eisenberg), who was transported to the U.S. and found by the bird-loving bookkeeper Linda (Leslie Mann). Raised as a nerd bird, Blu returned to Rio to mate with another survivor, the perky, indigenous Jewel (Hathaway). In the new sequel, Blu, Jewel and and their three offspring — studious Bia (Amandla Stenberg), mischievous Tiago (Pierce Gagnon) and teen-misfit Carla (Rachel Crow) — fly back to the rain forest, and Jewel’s long-lost kin, for a very special episode of Meet the Flockers.

All very sweet and tweet, until human civilization sends in its giant beasts — dozens of earthmovers — to cut down the parrots’ imperiled habitat. Fox News Channel may take this as eco-ganda, another attempt from left-wing Hollywood to poison the minds of little ones, as The Lorax and The LEGO Movie supposedly did. But director Carlos Saldanha and the new film’s writers (Carlos Kotkin, Jenny Bicks, Yoni Brenner and the late Don Rhymer) didn’t invent the threat to the Spix’s macaw. As Birdlife.org reports: “The last known individual in the wild disappeared at the end of 2000, and no others may remain.”

And now, on with the show!

(READ: The ‘Socialist toys’ in The LEGO Movie)

Rio 2 faces the problem of any animated sequel: introducing new characters — here Jewel’s stern father Eduardo (Andy Garcia), his sister Mimi (Rita Moreno) and the preeningly macho Roberto (Bruno Mars) to stoke Blu’s envy — while finding work for all the creatures in the first episode. Tullio (Rodrigo Santoro), who protected Jewel while she was in captivity, returns, as do Blu’s rambunctious bird pals Rafael (George Lopez), Nico (Jamie Foxx) and Pedro (will.i.am). The cockatoo villain Nigel (Jemaine Clement), seemingly kaput at the end of the first Rio, is improbably revived and gets a cross-species love interest in a poisonous frog named Gabi (Kristen Chenoweth). Only the pit bull Luiz (Tracy Morgan) is left behind, though he shows up at the end, somehow having navigated the 2,000-mile inland trek.

A little less agreeable and way more aggressive than its better begetter, Rio 2 has the overstuffed agenda of a movie that’s been focus-grouped to death. Realizing that an animated feature’s prime customers are moms who take their kids, the filmmakers paint a feisty sensitivity on the adult females, Jewel and Linda, while turning Blu and Tullio into clumsy, stubborn dolts, who endure more humiliation than a freshman at a fraternity hazing. (The two males are subject to about a dozen castration gags.)

(SEE: How Disney and Pixar toyed with motherhood)

More focus-grouping: Anticipating Brazil’s hosting of this summer’s World Cup, the movie conjures an all-bird soccer match, avian Quidditch, which the city-bred Blu naturally screws up. Nominally an adult, he is essentially a troubled kid in a hostile environment — like the protagonist of virtually every animated feature dating back to Dumbo and Bambi and up to Toy Story 3 and Frozen. Jewel feels at home in the jungle, to which Blu, who can’t cope without his fanny pack and smartphone GPS, is the intruder. She Tarzan, he Jane.

Many a classic musical comedy, of the kind the Fred Astaire and Ginger Rogers danced through, had a disposable script and ineffable production numbers. Rio 2, no classic, comes alive whenever it sings and moves. The movie’s opening celebrates New Year’s Eve with the vivid “Sapo Cal,” colors and characters exploding everywhere to the samba percussion of composers Sergio Mendes, Carlinho Brown and John Powell. Hathaway exercises her expert chops on the ballad “Don’t Go Away”; Broadway legend Moreno and previous non-singer Garcia duet on “Beautiful Creatures.” In fact, most of the good comedy in Rio 2 is connected with the music, as in a snatch of spectacular funny-intentional bad singing (by Bebel Gilberto, daughter of João Gilberto), or when some cute birdies start to sing “Memory” (from Cats — already a sly joke), and are instantly devoured by a panther.

(SEE: Our choice of the all-TIME 25 Best Animated Features)

Clement, nearly stealing the limelight with his Anglo-ham foppery, gets an unnecessary but delightful solo — Gloria Gaynor’s “I Will Survive” — and supports Chenoweth’s knockout diva turn, “Poisonous Love” (by Brown, Powell and lyricist Randy Rogel), which Gabi sings to the sleeping Nigel. Escalating from Broadway patter song to Tristan und Isolde intensity, it challenges Josh Gad’s “In Summer,” from Frozen, as the cleverest and most passionately rendered original number in recent movie history.

Enjoy the silly symphony of jungle colors, in that lush Avatar palette, and unexpected moments of inspiration like the montage of the Blu family’s flight to the rain forest, in which tourist sites are fleshed out from pop-up book items to the fulfill the movie’s 3-D potential. Even when it’s coarse and calculating, this is an eager entertainment machine that will keep the kids satisfied. Just don’t tell them that the Rio movies are musical comedies about an avian genocide. 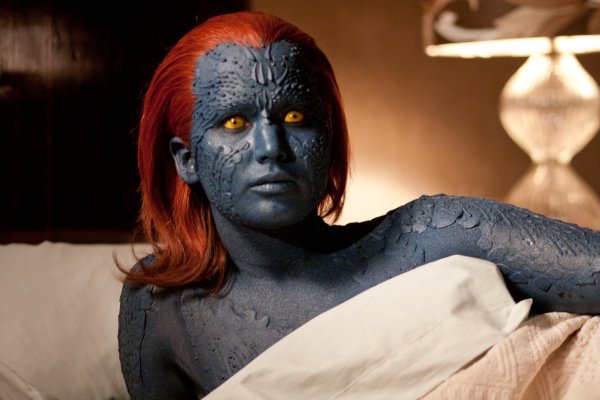 Jennifer Lawrence Could Star as Mystique in Next X-Men Spinoff Film
Next Up: Editor's Pick