People Are Binging on All of the Eggs, Fire, Beer and Attitude in Liu Shichao Drinking Videos

A man who appears to have plenty of intestinal fortitude has amassed a considerable following from fans who who dubbed him a “king” thanks to his clips of himself binge drinking questionable cocktails.

Suffice it to say not these are not “mixology” videos you’d want to try at home. In one video for instance, this 33-year-old Hebei-based content creator Liu Shichao wears sunglasses and in between drags of his cigarette, proceeds to create a concoction with soda, beer, and a raw egg. Tilting his head back, he knocks it all back in one gulp, no matter how unappetizing looking.

He even includes multiple splashes of fire and dips his finger into one of his cocktail’s blue blazes.

He started with beer in 2016 posting videos on one of the popular Chinese platforms Kuaishou, and has showed no signs of slowing down. He is clearly really dedicated to the stunts. This was one of many in this genre that he has attracted global buzz for, and he seems to keep heightening his shtick.

He kept his clips short only because of the site’s time limits. “The reason my videos are so short is that Kuaishou only allowed one-minute videos,” he told the BBC. “We needed to drink very fast to finish them within the time limit.”

While he insists he doesn’t have a drinking problem and has a clean bill of health when he gets a check-up, he does admit his wife worries. “She is annoyed and is worried about my health,” he said. “We often argue about this.” But perhaps that’s besides the point.

He’s not alone when it comes to this genre either, but says his videos aren’t modeled after any one internet personality.

As for the dangers of binge drinking, he acknowledges the issue.

“Yes, in China for these short video apps there are regulations that forbid drinking — especially drinking a lot. Because it can have a negative impact on young children and teenagers. Back when I would make those videos a lot of people would comment, “I want to imitate this,” he said.

Naturally, the party on his first platform didn’t last forever. Eventually, it was shut down. But that wasn’t enough to stop him from getting virtual attention. This summer, he cracked America once someone on Twitter got a hold of the video and shared it. With a handle @hebeipangzai, he now commands more than 71,000 followers and even makes some side money it through a PayPal account.

Take a look at the Liu Shichao drinking videos below. 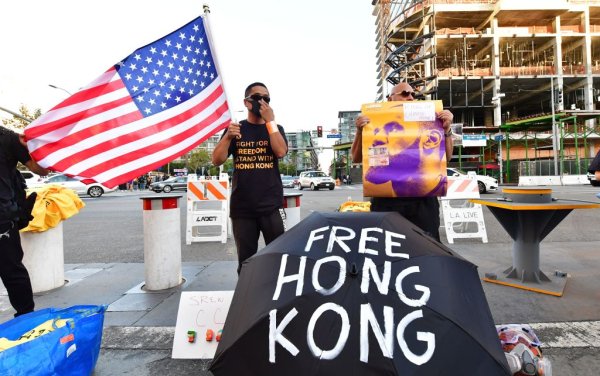 Kid Pulls a Political Bait and Switch on the NBA Basketball Game Dance Cam
Next Up: Editor's Pick