After months of preaching the gospel of civility and unity on the campaign trail, former Vice President Joe Biden returned to a sharper message on Wednesday, pitching himself once again as the most qualified warrior for an aggrieved working class.

The shift was, perhaps, a signal that Biden’s campaign has been watching a handful of recent polls that show his slipping support among white, working-class voters—a crucial demographic for his bid for the White House.

A Quinnipiac University poll conducted nationally after Biden entered the race on April 25 showed him with the support of 47% of voters who earned less than $50,000 a year. Five months later, when Quinnipiac asked the question in October, Biden was down to 26% support among that same demographic. Biden’s top-polling rivals, Senators Elizabeth Warren and Bernie Sanders, were hot on his heels, at 19% support and 18% respectively, among the same demographic. (Both polls relied on small sample sizes, so the margins of error are high.)

A different pair of Quinnipiac surveys of white voters without a college degree show a similar trend. In May, Biden enjoyed 37% support in that demographic; by October, that number fell to 21%. The last survey showed Warren overtaking Biden with 29% support among this group.

In the first-to-vote state of New Hampshire, Biden’s support among the white working class appears to be holding, although he lacks a monopoly on the group. A September poll from The Boston Herald/ Franklin Pierce University found that, among voters who earn less than $35,000 a year, Sanders was on top with 27% and Biden trailing with 20%. But a month later, the same poll in October showed Warren rising from 9% to 19% and Biden climbing to 34%, while Sanders slid to 19%. (Most polls in Iowa, the first-to-caucus state, don’t break down candidates’ support by voters’ education or income.)

The Herald/ FPU polls track “very favorable” views of Biden among those earning less than $35,000 sinking from 35% to 28%, while “somewhat favorable” views growing from 31% to 41% from September to October. Taken in aggregate, Biden’s total favorable ratings rose from 66% to 69%.

To be sure, none of these polling results amount to a red alert for Biden’s prospects. The former Vice President still has near-universal name recognition, his schedule is packed with high-dollar fundraisers, and one national poll this month shows him with his widest lead yet.

Looking past the primary, Democratic voters say they highly value a candidate’s ability to defeat President Trump—and Biden’s campaign has long made the case that he has the best prospects in that respect. According to a poll taken in Ohio at the end of September and early October, Biden bests Trump by six percentage points. (The same poll showed both Sanders and Warren prevailing against Trump as well.)

More telling in Ohio, however, are the 11% of Democrats and the 19% of independents who said they voted for Trump. To win Ohio, a Democrat needs to win them back. In hypothetical head-to-heads between Trump versus Biden or Warren, Trump retains 91% of his supporters from 2016 against both Democrats. The only Democrat who makes in-roads among those Trump-voters is Sanders: In a primary, 26% of Trump voters from November 2016 say they would vote for Sanders if they had to choose.

Biden’s team has, for months, vacillated between the best message for the candidate. In April, his campaign shelved a launch video (filmed, in part, in Scranton) that hammered at working-class themes, choosing instead one focused on Trump’s response to white nationalism in Charlottesville, Va., and the fight for America’s soul. The retooled pitch helped Biden contrast himself with Trump. But it also buried what many supporters see as his primary appeal: his willingness to embrace and advocate for the white, working class.

Which may explain why Biden spent his Wednesday morning in his hometown talking directly to a working-class base. “There used to be a basic bargain in America: if you contribute to the well being of the outfit you work with, you got to share in the benefits,” Biden told the crowd. “That bargain’s been broken.” 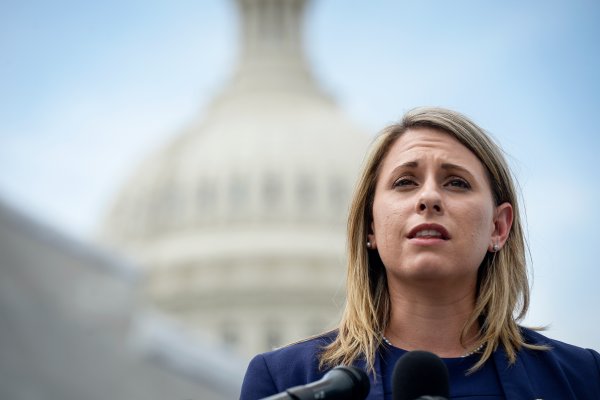