At a game full of fans in the crowd hamming it up for the camera at the NBA opener, one kid ensured he would seize his short window to make his political statement.

During a timeout during Tuesday night’s game in which Los Angeles Clippers beat the Los Angeles Lakers, the dance cam appeared to be scanning the fans in the crowd for the typical movers and shakers. Nothing too out of the ordinary there, until things took a more politically-minded turn.

A boy, later revealed as Matan Evenoff, was able to snag the attention of the dance cam operator by dancing festively with a Clippers shirt. But as soon as he has the spotlight, he swiftly switched gears and pulled out a a new shirt that read “Fight for Freedom, Stand up for Hong Kong” and pumped his fist in the air.

The camera swiftly panned away, but he was able to make his feelings known by showcasing the shirt’s message for a few seconds. Before the game started, Hong Kong supporters were demonstrating with a protest just outside the Staples center handing out the T-shirts for free.

This kid’s message comes amid the recent tensions between the NBA and China, which began when Houston Rockets General Manager Daryl Morey tweeted in support of the pro-democracy protests in Hong Kong. “Fight for freedom, stand with Hong Kong,” he wrote on Twitter. Morey has since apologized for the now-deleted tweet, but China has backtracked from its relationship with the league regardless.

Speaking at the TIME 100 Summit this month, NBA commissioner Adam Silver said “the losses have already been substantial. Our games are not back on the air in China as we speak, and we’ll see what happens next.”

Chinese state broadcaster CCTB opted not to air any of the NBA games on the opening day of the season. The Chinese government said the NBA needed to “show respect.”

Brief though the shirt flashing moment was, people have been circulating the clip online.

View the moment below. 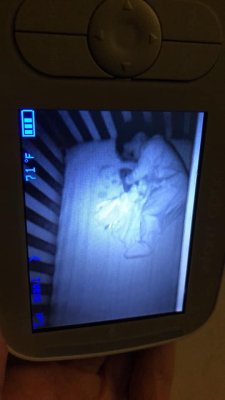 'A Whole Puzzling Kind of Night.' The Saga of the Mom Who Investigated the 'Ghost Baby' Visit Has a Glorious Ending
Next Up: Editor's Pick