I’m in a secret corporate lab dodging dinosaurs and hunting for the formula to toothpaste — not just any toothpaste, mind you, but diet toothpaste. A cream that could suppress the hunger of workers across the colony, driving down the costs of feeding them. But there are complications. The key ingredient is the stomach acid of a raptid — a monstrous lion-sized dinosaur. The raptids have escaped their pens, slaughtering dozens. Also, some of the test subjects have gone blind. But never mind that — my main concern is getting the formula. I’ll worry about the ethical implications of its creation and use after I take care of the raptids. That’s my job, as a freelancer in The Outer Worlds.

The Outer Worlds is a first-person RPG from Obsidian Entertainment out Oct. 25 for PlayStation 4, Xbox One and PC. In the distant future, humans are a space-faring species, and a cabal of corporations have exclusive rights to colonize a system of planets called Halcyon. The Hope was a colony ship, originally part of the first wave of settlers, that was lost along the way. I played as a character from that vessel, awoken after 70 years of cryo-sleep by a mad scientist who wanted my help taking down the corporations and waking up the other survivors.

I created a smooth-talking character who snuck around most combat situations and persuaded other folks into his way of thinking. Shortly after waking, I took control of a ship and put together a crew of ruffians and miscreants, including an adorkable mechanic, a morally conflicted vicar, a lethal cleaning robot, and frontier doctor as quick with a gun as she was with a scalpel. The Outer Worlds lets players craft their own character and handle situations the way they’d like. There’s room to be a gunslinger, a brawler, and ghost and everything in between. Hell, you can even turn the mad scientist into the authorities if you want.

Developer Obsidian Entertainment, the studio behind such weighty games as Star Wars: Knights of the Old Republic II, Fallout: New Vegas, and Pillars of Eternity, knows how to create morally complicated narratives, and that shines through in The Outer Worlds. The game builds on everything that’s good about Obsidian’s work while falling prey to its typical problems, including gameplay and design that sometimes feels half-baked.

You can’t talk about The Outer Worlds without talking about Bethesda’s Fallout. Obsidian’s founders worked on the original Fallout games before Bethesda purchased the license and launched the series into mainstream success with Fallout 3 and Fallout 4. The Outer Worlds initially feels like another Bethesda Fallout game — it’s a first-person RPG with a combat system that lets the player slow down time, it satirizes a specific moment in American culture, and it gives players a variety of methods for tackling any problem.

But The Outer Worlds is defined in the ways it deviates from Bethesda’s formula. Where Fallout satirized mid-century American culture while exploring anxiety about nuclear weapons in a post-apocalyptic hellscape, The Outer Worlds is a space-western telling a story about class struggles. It’s art nouveau where Fallout was art deco and Gilded Age where Fallout was Cold War. Instead of an open world, The Outer Worlds delivers a streamlined and well-designed series of explorable planets. It feels smaller, yes, but cultivated. Fallout 4 was massive, but much of the content was simply another empty building full of loot. In The Outer Worlds, everything feels deliberate and placed. Every building is dripping with lore, every open door has something compelling behind it.

Many of the features in The Outer Worlds feel like direct responses to the persistent problems and complaints players have about Fallout. Here, companions never block a doorway so you can’t leave a room, while their weight simply adds to a big pool, making inventory management easier. There’s a ton of loot, but there are also vending machines everywhere, so I never felt compelled to make lengthy trips back to town to offload my spoils. There’s even a perk that lets players fast-travel if they’re encumbered, a persistent problem in the Fallout franchise.

The Outer Worlds’ combat isn’t great, especially for characters focused on stealth and conversation. I could slow down time, a side-effect of the cryo-sleep, to briefly pause combat and adjust my aim, but fighting never felt quite as good as it did in Fallout. I’d sneak through as many combat encounters as possible, but eventually someone would see me and force me into a fight, which never felt fun.

The story is where The Outer Worlds really shines. This is a space western — think Firefly — set in a world where corporations run everything. The frontier is managed, and people who try to live outside the system don’t live long. If you’ve read a western or seen Deadwood, you know what to expect: corporate interests bad, working folk and cowboys good. But the narrative is never that simple. An early quest forced me to choose between diverting a power station’s juice to a budding independent colony or an existing company town. The people of the company town weren’t evil, and the game made sure I understood that cutting off its power would probably kill some of them. The town’s manager was bad at his job, but not evil. And the longer the game goes on, the more complicated things get.

The Outer Worlds doesn’t tell a simple good-versus-evil story that substitutes corporations for the evil. It’s more complicated than that. There are no binaries, just competing interests. The game reflects that by letting the player build their reputation with each faction, both good and bad simultaneously. As I played and I did something that angered or frightened a faction I’d done a lot of work for, it didn’t tarnish my good reputation, but increased that faction’s fear of me instead. They’re separate meters, allowing factions to hold complicated feelings about my character.

After I found the diet toothpaste formula, I gave it to the scientist who created it and had a stern talk about the emptiness of his life and the need to stand up to his corporate overlords. He seemed to listen. I could have kept the toothpaste for myself and sold it to a data broker I knew. A colleague of mine accidentally shamed the scientist into committing suicide, but reloaded the game because he felt bad about it. That’s the joy of The Outer Worlds: the diversity of outcome and the complicated nature of the choices it gives you. I always tried to do good, but I wasn’t always sure that I had. Often, I let my feelings lead, and sometimes they’d get me into trouble.

That never happened with Fallout. 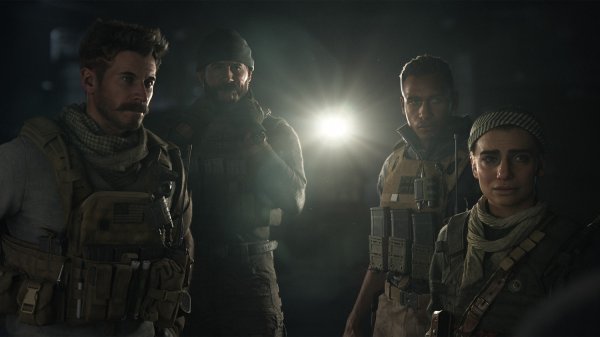 'No One Who Is 18 These Days Believes That War Is Easily Won.' With Call of Duty: Modern Warfare, Gaming's Most Successful Franchise Grows Up
Next Up: Editor's Pick