'I Don't Believe In Limits.' Marathoner Eliud Kipchoge On Breaking the 2-Hour Barrier

Eliud Kipchoge, photographed after his historic race in Vienna, on Oct. 12.
Tom Jamieson
By Sean Gregory

“Personally, I don’t believe in limits,” Kenyan marathoner Eliud Kipchoge tells TIME. The Olympic gold medalist and world-record holder put his beliefs to the test on October 12 in Vienna, when he attempted to become the first human in history to run 26.2 miles in under two hours. Kipchoge accomplished this breathtaking feat with relative ease, finishing the test in 1 hour, 59 minutes and 40 seconds. As he approached the finish line, Kipchoge pointed to the crowd before breaking a barrier many had considered impossible.

“My mind was clear,” says Kipchoge, 34, in a phone interview from Kenya, where thousands gathered in the streets to celebrate his accomplishment. “From the first kilometer to the last kilometer, I knew I had it.”

Kipchoge kept a sub-4 minute, 34 second-per-mile pace over the course of 26.2 miles, a stunning mix of speed and endurance. He has an unfathomable motor. “I’m sending a message to every individual in this world,” says Kipchoge, “that when you work hard, when you actually concentrate, when you set your priorities high, when you actually set your goals, and put them in your heart and in your mind and in your mind, you will accomplish, without any question.”

Kipchoge’s time is not an official word record, because he did not run under two hours in race conditions. (He already holds the official record, having run the 2018 Berlin Marathon in 2 hours, 1 minute and 39 seconds.) The event, sponsored by British petrochemicals company INEOS, was optimized for speed: Kipchoge ran in ideal weather on a flat course in Vienna, which was largely protected from wind by large trees. His team of more than 40 pace setters included some of the best distance runners in the world, like defending 1,500-meter Olympic champion Matt Centrowitz and Bernard Lagat, another Olympic medalist. These pace setters took turns running in a V formation in front of Kipchoge to reduce drag. Kipchoge also ran the race in special Nike shoes with carbon fiber in the sole.

These engineered conditions have led some to deemphasize the importance of the INEOS event. One running commentator called it a “marketing exhibition for a plastics manufacturer and springy shoes.”

Kipchoge remains utterly unbothered by such noise. He mentions the thousands of people who watched him break the 2-hour mark in Vienna, plus the untold millions who saw it on TV, heard about it or read about it. And if just one of those people took some inspiration from his actions, it was all worth it. “I am happy to inspire somebody,” he says. “And even if they say it’s not a world record, I have broken a barrier. Which makes a difference in human life, in a human family. That’s my evidence.” 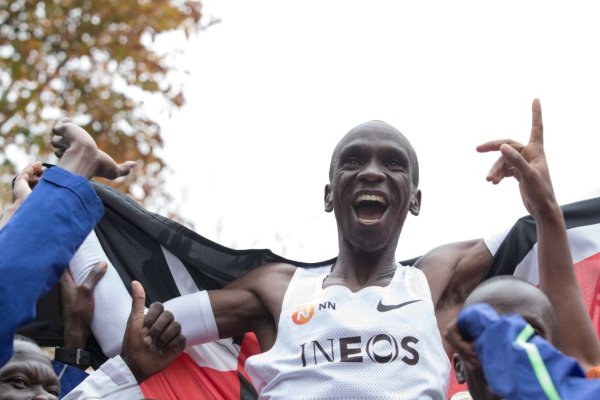 Man Runs Marathon in Under Two Hours
Next Up: Editor's Pick