Postcard From Germany: Moved For School, Stayed For Insulin

Every now and then, Katie West considers returning to the U.S. She moved to Germany for graduate school three years ago and now works as a health systems researcher in Hamburg. Her family is an ocean away. Then she remembers why she stays.

West, 30, has had type 1 diabetes since she was three years old. Back in Seattle, where she used to live, she typically paid $70 per month for insulin and another $130 for pump supplies. That was a relative steal in the U.S., made possible by her excellent health insurance, which she got through her employer. But still, it was a financial strain.

The price of insulin has increased globally in recent years, but no wealthy country has felt the impact as acutely as the U.S., where the cost has more than doubled since 2012, going from on average $344 per prescription that year to $666 in 2016, according to the Health Care Cost Institute, and continually climbing since. Germany is one of many Western nations, including England and Canada, which empower their governments to actively negotiate prescription drug prices, in turn holding consumer costs in check. The U.S. has no such system in place, and last year some 13.2% of the 2.9 million people who took insulin in the country did not take it as prescribed, and 24.4% asked their doctor for a lower-cost medication, according to the Centers for Disease Control and Prevention.

West, like 90% of German residents, is on one of the country’s many public insurance plans, which are administered through non-profit insurance companies. She pays for that benefit: maybe a third of her paycheck is withheld each month for taxes, health care and other social services. But in exchange, the coverage—including that of prescription drugs—is generous.

Germany has an easier time financing prescription coverage because these drugs cost less there. When a new drug comes to the German market, an independent panel assesses its effectiveness and whether its treatment value is commensurate with the manufacturer’s proposed price. Drugs serving a similar purpose or delivering the same benefit get grouped together. The panel sets a maximum price that insurers will pay for these medications―a practice known as “reference pricing.” Since most German residents are on public health insurance plans, and these plans are tightly regulated, there aren’t many ways for insurance providers to compete with one another. One option they do have, however, is to negotiate lower prices on prescription meds with drug manufacturers.

German law requires public plans to cap out-of-pocket health care costs, and to cover all medically necessary treatment, including insulin. For people with chronic conditions—like West—the out-of-pocket limit is set at 1% of household income. For those without such a condition, out-of-pocket costs are capped at 2%. After you hit the limit, the plan pays the rest; that’s why West’s insulin costs are so low. In fact, German diabetes patients have some of the lowest out-of-pocket costs in the world for insulin, according to T1 International, an advocacy group for people with type 1 diabetes.

Meanwhile, in the U.S., the climbing price of insulin has lit up both Capitol Hill and the 2020 presidential campaign trail, especially as voters call high-out-pocket costs their biggest health care concern, according to a June 2019 Kaiser Family Foundation poll. A February KFF poll from the same year shows that almost two-thirds of Americans queried support more government regulation of drug pricing. Lawmakers in D.C. have proposed legislation to that effect, like the bipartisan “Insulin Price Reduction Act,” which specifically targets the diabetes drug, and the “Affordable Drug Manufacturing Act,” proposed by Democratic Senator Elizabeth Warren, which includes regulating insulin pricing as one of a series of broader proposals. Legislators have also hauled in insulin manufacturers for congressional questioning, but these efforts have foundered in the face of congressional legislative inertia, partisan in-fighting over the best path forward, and intense pharmaceutical-industry lobbying.

Ken Inchausti, a Novo Nordisk spokesman, says a reference-pricing approach like Germany’s is incompatible with the American market. Instead of tackling drug prices, he says, policymakers should look at how insurance plans pay for insulin. A White House proposal first floated last fall to tie Medicare payments for some drugs to prices paid in European countries―including Germany―would do just that, at least for the public sector. But that plan, which aligns with ideas put forth by House Speaker Nancy Pelosi, has elicited vocal pushback from the pharmaceutical industry and other conservative groups, which have blanketed D.C. in critical advertisements. Powerful Senate Republicans have come out against the proposal, including Senate Finance Chair Chuck Grassley of Iowa, who argued this summer that it would hamper innovation.

Germany’s system isn’t perfect. West says she now pays more for basic over-the-counter medicines than for insulin. She asks her family to bring her ibuprofen when they visit, for example, because the price she would pay in Germany is roughly double the cost of the over-the-counter drug in the U.S. But West is still happier in Germany. “Why would I go back? It’s thousands of dollars a year I’m going to have to spend on the same [insulin] I get here for nothing.” The peace of mind alone makes it worth it. “A third of my income may go to taxes and health care here, but honestly, that’s fine. Take it. Take it!” she says. “I don’t have to worry.” 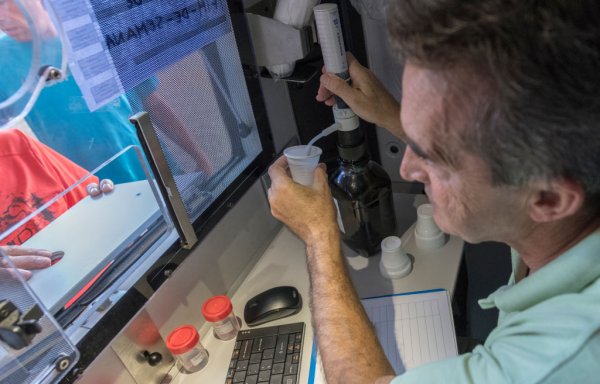 One Possible Solution to the Opioid Crisis in the U.S. Has Been Inexplicably Ignored
Next Up: Editor's Pick