Patient receiving an IV drip at a hospital.
xavierarnau—Getty Images
Ideas
By Scott Walker
Scott Walker is a senior advisor with the National Taxpayers Union and served as the 45th governor of Wisconsin from 2011 to 2019.

Matt Hiznay was diagnosed with stage IV lung cancer. He was a non-smoker and just 24 years old.

Unfortunately for Matt, the cancer was an aggressive form caused by a gene mutation. Thankfully, the U.S. Food and Drug Administration had approved a new chemotherapy drug on the day he was diagnosed.

The drug, Crizotinib, is intended for a rare type of lung cancer. Fewer than 4 percent of lung cancer patients have this kind of advanced, ALK-positive non-small cell lung disease. Crizotinib is targeted therapy that only attacks the cancerous cells with Matt’s specific mutation.

As Matt told the Cleveland Clinic, “it saved my life.” The Clinic noted that fluid around Matt’s heart and lungs made him so ill that his heart stopped beating more than once.

Sadly, the latest proposal by House Speaker Nancy Pelosi could put an abrupt stop to innovations in new drugs that serve small groups of people with rare diseases— people like Matt. While someone looking only at the overall financial impact might write off treatments for people in these categories, the families and friends of these patients understand that their existence is the difference between life and death for their loved ones.

The government price controls embedded in Speaker Pelosi’s draft would lead to reduced pharmaceutical production and innovation. Not only would this impact the well-being of vulnerable patients, it would raise the costs of health care programs operated by the federal government, which is too frequently the source of problems— not the solution. Misguided good intentions can still lead to bad outcomes that risk peoples’ lives.

A better solution is to lower regulatory barriers, defend American innovation in drugs as part of trade deals and reform federal program rules that currently inhibit generics and biosimilars. Market-driving reforms that treat a patient like a person and not a statistic are better than a massive takeover of the healthcare system by the federal government.

Speaker Pelosi’s proposal dramatically increases the power of the federal government. Under her plan, the U.S. Department of Health and Human Services would negotiate prices for up to 250 drugs a year. So the federal government that is now more than $22 trillion in debt is going to do a better job negotiating drug prices than the private sector?

Just as laughable is the claim of a voluntary negotiation period included in Speaker Pelosi’s draft language. The bill would subject manufacturers who either do not negotiate or do not reach an agreement with the federal government to a tax of up to 95 percent on the gross sales in the prior year for the drug in question. That’s like negotiating with a loaded gun next to your head.

On top of that, the Speaker Pelosi bill fixes drug prices by the use of foreign government price controls that set an upper limit on the price of a drug. This would reduce life expectancy and innovation. Try explaining the impact of price controls to a patient with an advanced, rare form of lung cancer — a patient like Matt. There is a reason why patients from countries with price controls on healthcare migrate to the United States for specialized care.

There are better ways to address this challenge in America. One is to remove many of the regulatory barriers that prevent generic and biosimilar products from coming to the market in a timely fashion. We need a quicker access to safe new drugs, biologics and medical devices. Passing the Reciprocity Ensures Streamlined Use of Lifesaving Treatments (RESULT) Act of 2019 would help accomplish this goal by expediting the approval of products that have been authorized to be lawfully marketed in other countries.

The federal government should also pursue better trade agreements that require burden-sharing of drug development costs. Historically, life-saving drugs are overwhelmingly developed in the United States while other countries put in place price controls that push more of the burden onto American consumers and taxpayers. The answer is not to adopt their price controls that would limit innovation that leads to cures. Rather, we should pursue trade deals that provide a shared commitment to cover the costs of research and development.

Finally, lawmakers should work on better oversight of government programs that provide drugs to needy patients. The inability of the federal government to manage their current programs is a reminder of why turning over more responsibility to them is a bad idea. Better management of current oversight programs would help to get new treatments to patients more efficiently.

We must find cost effective and efficient ways to help manage the costs of prescription drugs— particularly for people with high costs. But we must do it in a way that does not compromise our ability to find cures and to provide care to people like Matt Hiznay with that rare form of lung cancer.

Targeting the high costs of prescription drugs for a small percentage of the overall population is a good idea. Turning a major portion of our healthcare system over to the federal government is not. 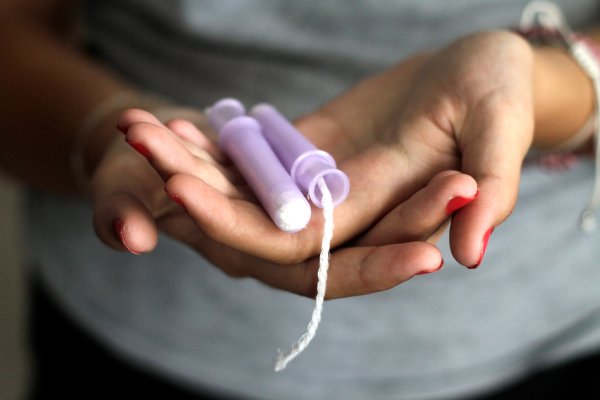 My Company Wanted to Show a Tampon String in an Ad. Major TV Networks Told Us to Remove It
Next Up: Editor's Pick