Separate shooting incidents in Philadelphia this weekend left a 2-year-old dead and an 11-month old in critical condition, events that the city’s police commissioner Christine Coulter said were examples of “senseless violence that traumatizes nearby children and upset their sense of security.”

The 2-year-old girl, who was identified as Nicolette Rivera, died as a result of a gunshot wound to the back of the head, police said. She was immediately pronounced dead on Sunday by emergency responders who found her wrapped in the arms of her injured mother, according to Captain Jason Smith of Homicide Division.

Police said an unidentified gunman opened fire and shot into the front window and door of the family’s Kensington home in north Philadelphia, seriously injuring the girl’s 24-year-old mother with a gunshot wound to the head and arm and a 33-year-old male contractor who was working in the home, with a gunshot wound to the stomach. Smith said other children and Nicolette‘s grandmother were also in the home at the time of the shooting.

Smith told reporters that it is safe to assume that the house was specifically targeted and that the shooter presumed an intended target was inside the house, but that they were not.

Just eight minutes prior to the shooting, two suspects, described as Hispanic or black males, opened fire at an SUV nearby, Smith said. He added that preliminary ballistic testing determined the casings in both the shootings came from the same type of assault rifle, which police believe was either an AK-47 or SKS.

Less than 24 hours earlier, an 11-month-old boy was shot four times while he was in a car with his stepmother in the north Philadelphia neighborhood of Hunting Park, only three miles away from Kensington.

Captain Nicholas Brown of the East Detectives Division told reporters on Monday that police believe the intended target was a third person in the car who remains unidentified at this time. Brown said a 9mm gun was used in the shooting and that the boy was shot once in the back of the head, once in the neck and twice in the buttocks. The boy remains in “very, very critical condition” with almost no chance of full recovery and will most likely be paralyzed, Brown said, citing doctors.

In a series of tweets on Sunday, Philadelphia mayor Jim Kenney said he was “outraged, disgusted and heartbroken,” by the shootings.

“Philadelphians should not live in fear of violence that could take away a child’s life,” Kenney tweeted. “But for too many, this is a sad reality. With the unabated flow of illegal guns and drugs, we must do whatever we can locally to address violence and help residents.”

Democratic Pennsylvania Sen. Bob Casey said he was praying for the families of the victims and issued support for action on gun reform.

According to Philadelphia Police crime statistics, there have been 280 victims of homicide in so far in 2019— up 4% from the same time last year. In 2018, the city tracked 353 total homicide victims. 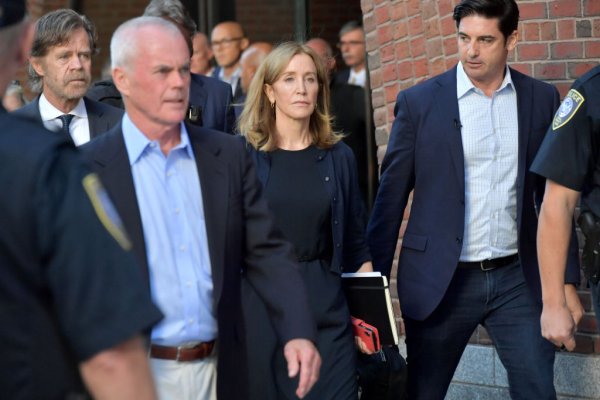 Why Defendants in the College Admissions Scam Are Changing Their Pleas
Next Up: Editor's Pick