If the House votes to impeach President Donald Trump, thereby catalyzing a trial in the Senate, it’ll mark a profound political and historical moment. But it’ll also usher in an extraordinary logistical challenge for the six sitting Democratic Senators duking it out for their party’s presidential nomination in 2020: they may be required in Washington during the peak of the early primary campaign.

Whether the House will vote to impeach President Trump is still uncertain, of course. But Congressional insiders tell TIME that if House Speaker Nancy Pelosi announces a vote, it would likely be before Thanksgiving. After that, it’ll take a least week to set up television cameras, hang lights and move furniture to make room for the President’s defense team and the prosecution in the Senate chamber, a senior aide to Leadership said. Which means that the Senate trial would likely begin in December. (That back-of-the-envelope calendar assumes that those investigating the President, who are picking up new leads with every day of testimony, limit the list of new witnesses.)

If lawmakers use the rules from the last impeachment trial in 1999, then hearings would begin promptly at 1 p.m. six days a week—Monday through Saturday—effectively shackling the six Senators-cum-Democratic-candidates to their desks on Capitol Hill. The timing could be tricky: if an impeachment trial happens anytime late this year or early next year, it’ll run up against the first-in-nation caucuses in Iowa on Feb. 3 and the primary vote in New Hampshire on Feb. 11.

Given that calendar, Senators Elizabeth Warren, Bernie Sanders, Kamala Harris, Cory Booker, Amy Klobuchar and Michael Bennet risk losing out on invaluable time on the campaign trail. And their top competitors, including Former Vice President Joe Biden and South Bend, Ind., Mayor Pete Buttigieg, may be able to capitalize on their collective hiatus from the trail.

The six Senators’ mandatory Washington interlude may also spark an ad war—on both TV and the Internet—as a proxy for in-person campaign events in Iowa, New Hampshire and beyond. “We did not build this into our media budget,” one campaign aide to a Senator running for President told TIME, referencing an impeachment trial. “We had counted on some earned media in-state. Now, we probably won’t even be in the state to earn it.”

If a potential impeachment proceeding slipped into 2020, it may further shape the Democratic primary race. While the incumbent Democratic Senators would miss even more in-state campaigning time, they may benefit from a national media laser-focused on the events unfolding in Washington.

“I could also argue that the non-Senators will have trouble getting media attention during the Senate trial, and media attention is the most valuable commodity in presidential politics,” says Alex Conant, a Republican strategist who was a top aide to Sen. Marco Rubio’s race for the GOP nomination while also in the Senate. “The Senate trial is potentially a huge opportunity for any of the Senators running for President to have a breakthrough moment. But if they fail to seize the opportunity, then they’ll really regret the days lost in the early states.”

Others point out that a Senate trial is not a helpul format for driving headlines. While Senators Harris, Klobuchar and Booker have created viral moments in the Senate Judiciary Committee with sharp and smart questions, an impeachment trial requires that Senators act, in effect, as jurors. They can only ask questions in writing to the Supreme Court’s Chief Justice, who presides over the session. That format offers scant chance for individual Senators to drive headlines from the Senate floor.

“I think several of them will look to create viral moments while here during the week. Even off the floor,” says Bryan DeAngeles, a former campaign and Senate aide to Chris Dodd, who ran for President in 2008 from his seat in the Senate. “They’ll look to capitalize on any media moment they can create and heavily promote it back into Iowa and New Hampshire.”

While the six Senators’ campaigns are aware of the potential logistical challenges, they say it’s too early to speak publicly about potential plans. “Tough to say, as we don’t know what the schedule is,” said Sabrina Singh, a spokeswoman for Booker’s presidential bid. “Everything depends on the House still.”

In a closed-door lunch on Oct. 16, Senate Majority Leader Mitch McConnell, briefing his Republican caucus on the logistics of impeachment, seemed to suggest that he considered an impeachment trial all but inevitable, according to two senior aids to Republican Leadership.

It’s far too early to determine how an impeachment proceeding may shape the Democratic nomination process. The first four states—Iowa, New Hampshire, Nevada and South Carolina—award just 4% of all pledged delegates. But political insiders contend that it’s the narrative, formed in the media and among donors and activists, that is invaluable. A candidate who is sidelined as the first four states would likely struggle to regain prominence afterward.

The Senate-based contenders thus far aren’t complaining. Every Democrat on stage last week at an Ohio debate supported impeachment proceedings, which are popular with the party’s base. (The sixth Senator in the race, Michael Bennet—who did not qualify for the debate—has said Trump has committed impeachable offenses but they were still at the beginning of the investigations.)

In a field so crowded and divided, impeachment is a rare unifier. “Sometimes there are issues that are bigger than politics,” Warren said during last week’s debate, “and I think that’s the case with this impeachment inquiry.” 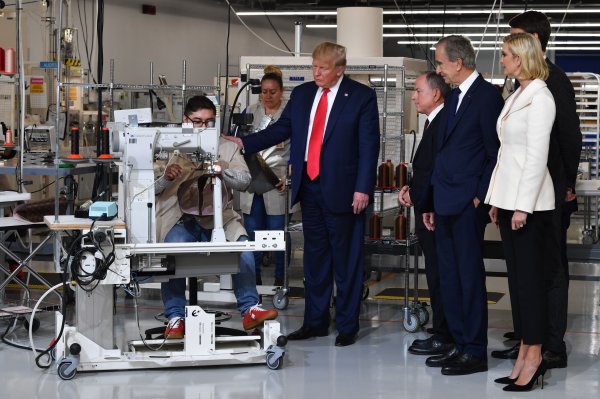