‘I Am Back’: Bernie Sanders Addresses 26,000 With Alexandria Ocasio-Cortez

Democratic presidential candidate Bernie Sanders addressed a raucous crowd on Saturday as he showcased two high-profile progressive endorsements, Rep. Alexandria Ocasio-Cortez and filmmaker Michael Moore, in his first rally since he suffered a heart attack earlier this month. “I am back!” he declared, to swelling cheers.

Surrounded by nearly 26,000 supporters at Queensbridge Park in New York, Sanders seemed energized by the enthusiastic show of force.

The endorsement from Ocasio-Cortez, one of the most sought-after in the Democratic Party, comes at an important time for the Sanders campaign. Massachusetts Senator Elizabeth Warren has also been attracting large crowds, substantial fundraising numbers and has surpassed Sanders in a number of national and early-state polls. And after Sanders’ heart attack Oct. 1, some questioned his ability to keep campaigning.

But on Saturday, Ocasio-Cortez backed Sanders, describing him as the one who can make change happen. “In 2016, he fundamentally changed politics in America,” she said, before introducing the Vermont Senator as her “tío Bernie.”

“We right now have one of the best Democratic presidential primary fields in a generation,” Ocasio-Cortez said, “and much of that is thanks to the work that Bernie Sanders has done in his entire life.”

The 30-year-old Congresswoman spoke for nearly 20 minutes about how Sanders shaped her own political awakening, saying that his politics caused her to “question and assert and recognize my inherent value as a human being that deserves healthcare, housing, education and a living wage.”

“I’m proud to say that the only reason that I had any hope in launching a longshot campaign for Congress is because Bernie Sanders proved that you can run a grassroots campaign and win in an America where we almost thought it wasn’t possible,” Ocasio-Cortez said.

Many attendees on Saturday had heard the news of Ocasio-Cortez’s endorsement, along with that of Rep. Ilhan Omar, last week. For some, the Congresswomen’s backing simply confirmed their own support for the Vermont Senator. “I feel like AOC is even closer to my heart,” said Steve Alvarez, a school psychologist who grew up in the Queens district that Ocasio-Cortez now represents. “If she didn’t endorse him, I would’ve been surprised.”

But others, who are still shopping for a candidate in a crowded Democratic field, said Ocasio-Cortez’s endorsement may sway their opinion. “It seems really early. If she’s doing this it must be from the heart and where her beliefs lie,” said Patrick Roberts, a 32-year-old bartender from New York. “I’m a big fan of her so I’m going to pay attention to it.”

The high-profile progressive endorsements come just as Warren’s campaign appeared poised to overtake Sanders’. The two outspoken liberal Senators share similar policy goals on health care, corporate accountability and access to higher education, but differ in important ways as well. Sanders is a Socialist, whereas Warren is an avowed capitalist who believes we need to reform the current economic system. The recent endorsements are a blow to Warren’s rising campaign.

In addition to the New York Congresswoman and Moore, Sanders’ rally on Saturday featured a lineup of speakers including Jane Sanders, his wife; Carmen Yulín Cruz, the major of San Juan, Puerto Rico; Tiffany Cabán, a local politician who narrowly lost the district attorney race in Queens this year; and former Ohio State Senator Nina Turner. The group pushed back at the idea that Sanders’ age would be an issue and emphasized that he—and not anyone else on the Democratic stage—would bring the revolution they were looking for.

Turner spoke to the diverse crowd about why other Democratic candidates could not produce the same results as she said Sanders would. “There are many copies,” she said, pointedly not mentioning any other candidate by name. “But there is only one original. I don’t know why you’d take a copy, baby, when you can have the original.”

While the Queens rally attracted many Sanders super-fans, including a man in a paper mache Sanders costume and another in a smock made out of Sanders campaign-branded fabric, there were also plenty of voters still weighing their options between Sanders and Warren.

“I’m a pretty intense Warren supporter,” said Arielle Gironza, a 23-year-old pre-med student. She supported Sanders in 2016 but this time has been attracted by Warren’s pitch. “But this was very inspiring,” she admitted after Sanders left the stage.

Crystal Luo, a graduate student from Virginia at the rally said she likes both Warren and Sanders, but that she felt Sanders has been the most committed to positions she cares about. “Especially now, the housing policy that just came out,” she said referring to Sanders’ recent plan to increase affordable housing and establish a national rent control program.

Sanders’ housing policy was a big part of his pitch on Saturday, as the Queens rally took place across the street from the country’s largest public housing complex. The Vermont Senator spoke about his plan to build 10 million new affordable housing units and ensure environmental justice for all Americans.

For Luo and others like her, this was exactly what they wanted to hear. “It’s just getting more radical,” she said. 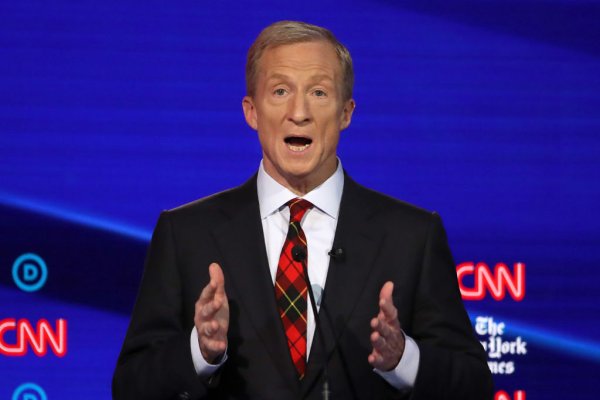 Tom Steyer Has Spent $47.6 Million on His Presidential Campaign. That Money Could Help Democrats in Hundreds of State Races
Next Up: Editor's Pick