The Information War Over Trump's Impeachment

Cybercrime.
Dominic Lipinski—AP
Ideas
By P.W. Singer
Singer is Strategist for the New America Foundation and the author of multiple best-selling books on new security threats, such as LikeWar , Ghost Fleet and Burn-In.

When a White House whistleblower reported that Donald Trump asked a foreign nation to “do us a favor” if it wanted U.S. military aid, it didn’t just start an impeachment. It started a war playing out on your screens that could determine the outcome.

Over the last generation, nations, militaries, businesses, and political parties have all come to grips with the threat of computer networks being hacked, commonly thought of as “cyberwar.”

Yet these efforts to steal information now come with a twin that tries to spread it, often with even more powerful results. As illustration, while the DNC may have been famously hacked during the 2016 election of greater import was that over half the US population in 2016 was unknowingly exposed to Russian propaganda via their Facebook accounts. Indeed, as a bipartisan Senate report revealed last week, Russian information warriors literally celebrated their success with a toast of champagne. If “cyberwar” is the hacking of networks, this kind of “likewar” is the hacking of people on them, by driving ideas viral through likes, shares, and sometimes lies.

Just as in 2016, we’re now seeing all the elements of likewar deployed into the battle over impeachment. Supporters of the president have funded crowdsourced manhunts, mining the web for clues to the whistleblower’s identity. If they are found, any tiny nuggets in their background will then be weaponized, not just to try to discredit them via some unrelated belief or gaffe posted years back, but to threaten them and their family. Indeed, the risk of violence has been already been massively spurred on by the loudest voice on social media of all, who described the whistleblower and then those supporting impeachment as committing a crime punishable by death. Given the history of past mass killers echoing Trump’s words, this falls somewhere between a direct call to violence and what is known as “stochastic terrorism,” where you create the supporting conditions for it.

In turn, opponents of the president are engaged in their own online hunt for open-source intelligence of a kind even the CIA found hard to collect a decade back. Networks of anti-Trump activists are mining everything from old Pentagon documents on delayed missile deliveries to the travel history of Ukrainian oligarchs to see when and where they crossed paths with Rudy Giuliani and even Jared Kushner.

While truth may be surfaced by these dueling hunts, the response to it is to follow the lessons of Russian information warfare: bury it underneath a sea of lies. Online warfare is fought not by consistency, but a constantly altering set of explanations and “alternative facts.” The day by day shift of the contents of the infamous call or whether Giuliani was acting as the president’s personal lawyer or not is a deliberate feature not a bug. Russia may have pioneered this tactic (such as how it responded to to its 2014 shootdown of the airliner over Ukraine, by pushing out a dozen different conflicting stories in its defense ) but it is now the new normal in our own politics, appearing in everything from the impeachment debate (where the President and his staff have said he did and didn’t demand a quid pro quo with Ukraine, with his chief of staff Mick Mulvaney literally providing both versions over the course of mere hours) to the Syria withdrawal (where the President has pushed out at least a half dozen different explanations for why he did and didn’t greenlight the Turkish invasion and abandonment of America’s Kurdish allies). Simply put, if you can muddy the waters enough, then you might just be able to daze and confuse your audience into submission, or at least just have them think that “both sides” are the same.

In these battles for virality, all the familiar tactics and tools are being deployed. The whistleblower’s memo has already been turned into a series of gifs, using Internet memes like scenes from Anchorman, to leverage web culture to help it take off. In turn, opponents to the memo are leaning into classic conspiracy theories to try to undermine its spread, such as the old stand-by that somehow George Soros and the “globalists” (I.E. the Jews) are involved. Even the efforts to push out multiple competing hashtagged names for the affair are part of an effort to keep it from coalescing in the public mind. As long as there is no equivalent to #watergate , there is no single way for the public to unite around it.

This back and forth can be shrugged off as mere online games, but the effect is real. What shapes social media shapes not just what you see on your screen, and then share with your friends and family to echo out repeatedly wider. It also shapes what happens on other media, with over 90% of journalists regularly using social media for their work. What trends online, even if artificially driven, helps influence everything from what stories newspaper reporters pursue to which guests radio show producers book.

Again and again, we have seen how an influence operation-shaped shift in online trends and then perceptions can shape elections (ranging from Brazil to Brexit) to even congressional votes. Indeed, almost exactly one year ago it swung the hearings for Supreme Court justice Brett Kavanaugh. When Kavanaugh was accused of sexual assault by Christine Blasey Ford, an obscure Internet conspiracy theory that mixed was created in his defense, that Kavanaugh somehow had a doppelganger, who had actually committed the sexual assault. It was originally mocked and even led to its originator to resign his job from a DC thinktank in shame. Yet, as the theory subsequently went viral, it gave moderate Republican senators a narrative to vote to confirm Kavanaugh, without explicitly calling his accuser a liar. The same model may have already happened in the looming battle over impeachment, where a false claim that the “deep state” secretly altered U.S. whistleblower law first popped in online conservative forms. Despite being debunked repeatedly, it has gone viral with amplifying repeats by the President and GOP House Leader Kevin McCarthy.

The next few weeks will be a crucial moment for American democracy. As the battle over impeachment plays out, we all need to wise up to this online war that is targeting each of us. Both the public and media need to understand its features and be careful to distinguish when something is organic and when both we and the algorithms of the networks are being played with. Most of all, we need to recognize our own power and responsibility. It will be us who will ultimately determine if it is veracity or virality that matters most in our democracy. 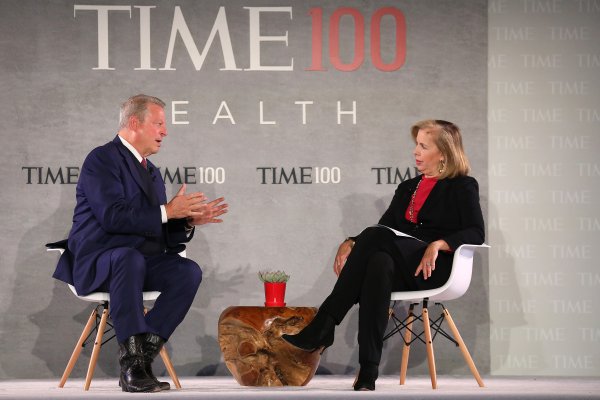 Gore: Senate Could Convict Trump
Next Up: Editor's Pick