Amid widening divisions in the Democratic Party over the future of health care policy, former President Bill Clinton waded into the debate, saying the nation is “at a crossroads” on health care reform and “we should pick the low hanging fruit first.”

“The problem is the system is still entirely too complex,” Clinton told told David Agus, CEO of the Lawrence J. Ellison Institute for Transformative Medicine of USC, at the TIME 100 Health Summit in New York City on Thursday. “The premiums are going up way more than wages are going up, and the co-pays and deductibles and the drug prices are going up even more than the premiums. So, we’re kind of at a crossroads now.”

“We should pick the low-hanging fruit first,” Clinton continued. “I think we need to pass a public option and go back to encouraging all-payer systems in states so that you can have some control over the costs and keep it as simple as possible.”

Clinton’s appearance at the summit occurred just two days after 12 Democratic presidential candidates took the stage for a primary debate in Ohio. Some Democrats running for president in 2020 have supported a single-payer system, would provide universal healthcare in a national government-funded program. The Medicare-for-All proposal put forth by Massachusetts Sen. Elizabeth Warren and Vermont Sen. Bernie Sanders is a single-payer proposal. “The great appeal for the single-payer system is it’s universal and it’s simple,” Clinton said on Thursday.

The 42nd president spoke briefly about the 2020 election, saying that he’s “optimistic” for the country’s future but noting displeasure at some of the events that transpired in 2016 when Donald Trump beat Hillary Clinton. “I think in this next election we’re going to have fair coverage,” Clinton said. “I don’t think they’ll be the kind of unbelievable interference there was in America by the leader of the FBI. I think Vladimir Putin will try to change the election, but he’d have to steal a lot more votes this time. And I don’t think you can without getting caught, I hope.”

Over the course of the wide-ranging conversation, Clinton also spoke about his personal health journey. He said he weighs three pounds less now at age 73 than he did in high school, though he joked that the weight is “slightly differently distributed.” He was wearing a Fitbit onstage and said he wears one every day, and is partial to the Fitbit over the Apple Watch because it costs less. He said the anti-vaxxer movement is “crazy” and recalled the “look of relief” on his mother’s face when he got the polio vaccine.

When asked what he would change about his health-related behaviors in his 20s, 30s and 40s, the former President laughed. “I’d eat a lot less fried foods,” he said. 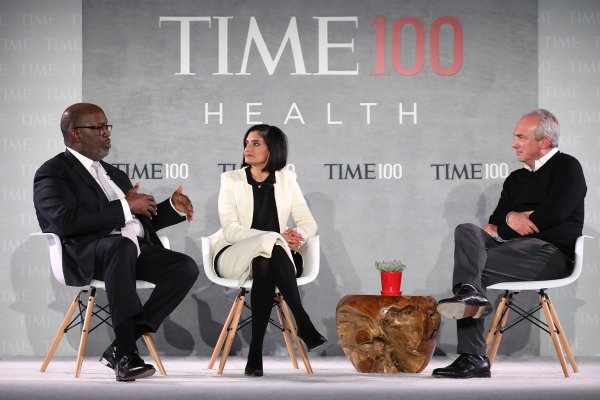