Qantas flight number 4 from Honolulu, a Boeing 747-400 aircraft flies over a Qantas A380 aircraft as she arrives at Sydney Airport on September 30, 2018 in Sydney, Australia. Friday’s flight from New York is a key test for Qantas as it prepares to start direct commercial services to Sydney as soon as 2022.
James D. Morgan—Getty Images
By Angus Whitley / Bloomberg

For decades, travelers have stoically endured jet lag as an unavoidable menace on long journeys. Now, as airlines push for record-breaking non-stop flights halfway around the planet, efforts to counter the debilitating symptoms are turning into a billion-dollar industry.

Fresh insight into the physical and emotional toll of ultra-long haul travel should emerge this weekend when Qantas Airways Ltd. flies direct from New York to Sydney. No airline has ever completed that route without stopping. At nearly 20 hours, it’s set to be the world’s longest flight, leaving the U.S. on Friday and landing in Australia during its Sunday morning.

This will be more than an endurance exercise. Scientists and medical researchers in the cabin will turn Qantas’s brand-new Boeing Co. Dreamliner into a high-altitude laboratory. They’ll screen the brains of the pilots for alertness, while monitoring the food, sleep and activity of the few dozen passengers — including yours truly. The aim is to see how humans hold up to the ordeal.

The physical burden on customers is putting a renewed focus on jet lag, and creating a supermarket of products and home-made creations to ease the suffering. In that shopping basket: melatonin tablets, Pfizer Inc.’s anti-anxiety medication Xanax, and Propeaq light-emitting glasses that claim to get the body back on track. And yes, there’s an app for that and many other potential remedies.

The potential customer base is staggering. The International Air Transport Association expects some 4.6 billion people to take a flight in 2019, a total that will jump to 8.2 billion in 2037.

Demand for jet-lag therapies is growing at about 6% each year and the industry will be worth $732 million in 2023, according to BIS Healthcare. The broader sleeping-disorder market — dominated by pills — is worth $1.5 billion and will swell to $1.7 billion by 2023, GlobalData says, adding that more than 80 drugs targeting disturbed sleep are in clinical development.

Jet lag typically strikes when a traveler crosses three times zones or more in quick order, leaving the body’s internal clock running to the timetable at home. The chief complaint after touching down is often overwhelming fatigue during the day or merciless insomnia at night. The fallout can be worse heading east, because traveling in that direction effectively reverses the normal day-and-night cycle.

Unsettling as they are, those ailments barely do jet lag justice.

Each of the billions of cells in the human body has its own clock, and vital processes including heart function, food absorption and metabolism are all disrupted when organs get out of step, said Carrie Partch, a biochemist and associate professor at the University of California Santa Cruz who has studied the circadian rhythm for 20 years.

“Jet lag is more than just an inconvenience,” Partch said in an interview. “It’s pretty devastating physiologically. If you’re a constant traveler, you’ll probably put on more weight, you’ll probably have cardiovascular challenges and you may have some behavioral changes.”

While researchers in this field understand how light enters the brain and adjusts the master clock, they’re still learning more. As recently as 2017, scientists won a Nobel prize for discovering molecular mechanisms that control circadian rhythms. Even if the core proteins of a rodent can be manipulated in a laboratory to speed up internal clock adjustment, a fast-acting pill that can do the same for frequent flyers is a way off, Partch said.

An App For That

Scientists have found exercise and the right food can help synchronize the body to a new time zone, though research has also repeatedly shown sunlight is the most powerful tool. A University of Boulder Colorado study in 2017 said body-clock adjustment can be rapidly achieved by exposure to natural light alone.

Friday’s flight from New York, and another from London later this year, are key tests for Qantas as it prepares to start direct commercial services from those cities to Sydney as soon as 2022. The airline calls it Project Sunrise. If successful, Qantas says other super-long, non-stop routes from Australia’s east coast to South America and Africa might follow.

Airbus SE and Boeing are vying to supply the carrier with new long-range aircraft that can reach the destination with a full load and fuel to spare. Qantas plans to make a decision to press ahead with these flights, or ditch the idea, by the end of 2019.

It’s not just crossing time zones that upsets passengers. General fatigue, poor-quality sleep, as well as the dry and pressurized cabin air exacerbate jet-lag symptoms, said Conrad Moreira, a medical director at the Travel Doctor-TMVC clinic in Sydney who has worked in the field for more than a decade.

“I’ve seen people disoriented a week after a flight,” Moreira said in an interview. He prescribes a range of sleep-inducing drugs, particularly for anxious flyers. They including Stilnox — also known as Ambien — and Xanax. Tablets containing melatonin, naturally produced in the body to promote sleep, can also help, he said.

Jet lag has been confounding travelers since, well, the jet era. There are already at least half a dozen ultra-long flights lasting 17 hours or more, including an Auckland-Doha service by Qatar Airways. Qantas last year started direct services to London from Perth on Australia’s western seaboard.

Just like all those routes, Qantas’s planned network of longer, clock-busting flights will be prey to rising fuel prices. And beyond that, there’s a growing movement to encourage flyers to cut their carbon emissions. Still, the airline’s stock has soared about fivefold in five years. Qantas rose 2.9% Tuesday to its highest since August 2018.

Addressing the health implications of ultra-long flights is critical for Qantas. It must gain permission from Australia’s civil aviation regulator for cabin crew to be on duty longer than 20 hours. The airline also needs a new deal with pilots who will fly the extra-long routes on new aircraft.

Managing staff exhaustion from lengthy trips is an issue for the entire industry. According to IATA’s latest fatigue-management manual, some cabin crew can spend almost 21 hours awake on the day of a long-haul flight — even when their duty period is shorter than 10 hours.

Qantas’s ultra-long direct flights will be priced squarely at the business traveler, since they stand to win precious hours on the ground at the destination, said Rico Merkert, professor of transport and supply-chain management at the University of Sydney’s business school.

“It could be a game changer if they get it right,” Merkert said. 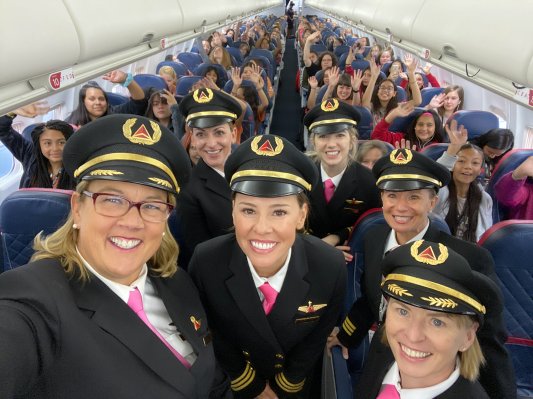 All-Female Crew Flew 120 Girls to NASA
Next Up: Editor's Pick