Hong Kong’s embattled leader Carrie Lam is set to deliver a key policy address Wednesday as her government grapples with increasingly violent protests that may have entered a dangerous new phase after police say a homemade bomb exploded last weekend.

Despite fears of disruptions, Lam is slated to give her speech at the city’s Legislative Council complex, which was recently restored after demonstrators laid siege to it in July.

The annual speech marks the start of a new legislative year, and is expected to outline the administration’s response to issues of economic disparity and soaring housing costs—problems in part underlying the five months of unrest. During a press conference Tuesday, Lam said her remarks will primarily focus on land and housing policies.

She is not expected to provide further concessions to the pro-democracy movement, which has spawned weekly skirmishes between police and protesters. As the crackdown intensifies, with police arresting more than 2,500 protesters, the black-clad demonstrators have fired back bricks, gasoline bombs and most recently, police say, an improvised explosive.

The homemade bomb was concealed in a roadside bush about a mile away from a police vehicle and was detonated remotely by a mobile phone, Suryanto Chin-chiu, superintendent of the Hong Kong police’s Explosive Ordinance Disposal Bureau, said during a press conference Monday. The device was made with “high-performance explosives,” he added.

The impact of Sunday’s explosion was minimal with no injuries reported, but Suryanto said that the bomb-maker appeared to be familiar with chemicals and electrical devices, and “has the ability to make effective explosives.”

“The tactics and explosives involved are similar to those used in terrorist attacks around the world,” he said, adding that “the use of explosives is an escalation of violence.”

But Gary Tang, an assistant professor of social science at the Hang Seng University of Hong Kong, cautioned against drawing hasty conclusions. There is no evidence, he says, linking the device to protesters.

“If the bomb is as advanced as the police described, I think very few people can make such a bomb,” he says.

In a separate incident that pointed to intensifying violence Sunday, a protester slashed an officer with a “sharp-edged object,” police say. The officer was hospitalized but is in stable condition.

Protests and police have both increased their firepower as the political deadlock drags on. Earlier this month, officers shot two teenage protesters with live rounds. Both survived.

In the movement’s earliest days, demonstrators armed themselves with umbrellas and makeshift shields. Now, pitched battles have become the norm, with hardline protesters saying they have been given no recourse after the government refused to respond to peaceful marches.

What began as a public backlash to a contentious extradition bill has in the 19 weeks since broadened into a wider anti-communist movement, with demands that include fully democratic elections.

While further demonstrations are planned for the coming weekend, there have been few calls to stage a protest to coincide with Lam’s coming policy address, likely owing to the heightened security around the Legislative Council building.

The last time Lam made a political appearance, she ended up trapped inside the building long after the town hall-style dialogue ended, unwilling to leave while angry protesters encircled the premises. 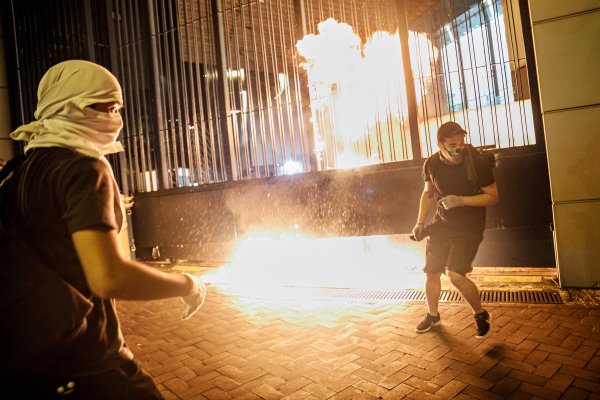 Hong Kong Needs an 'Immediate Cessation of Violence'
Next Up: Editor's Pick