Sen. Elizabeth Warren one of several Democrats running for the party's nomination in the 2020 presidential race, speaks during a campaign event, March 8, 2019 in the Queens borough of New York City.
Drew Angerer—Getty Images
By Madeleine Carlisle

The ad reads: “Breaking news: Mark Zuckerberg and Facebook just endorsed Donald Trump for re-election. You’re probably shocked, and you might be thinking, ‘how could this possible be true?’ Well it’s not. (Sorry.) But what Zuckerberg *has* done is given Donald Trump free rein to lie on his platform — and then to pay Facebook gobs of money to push out their lies to American voters.”

Warren, who campaigns on breaking up big tech companies like Facebook and Google because they have an outsized influence, tweeted on Saturday that the fake ad was designed to see “just how far” Facebook’s policy would let her campaign go.

“We intentionally made a Facebook ad with false claims and submitted it to Facebook’s ad platform to see if it’d be approved. It got approved quickly and the ad is now running on Facebook,” she tweeted.

There’s no love lost between the Massachusetts senator and the social media giant. Warren has repeated criticized Facebook while campaigning, and leaked audio of a Facebook meeting in July revealed Zuckerberg promising to fight Warren’s proposal to breakup the company were she elected President. He also said that her election would “suck” for the company.

Recently, the Trump campaign has been running a social media ad that falsely claims Joe Biden promised money to Ukraine to fire a prosecutor investigating his son. There’s no evidence this ever occurred. Reuters reports that the Biden campaign sent letters to Facebook, Twitter and Google asking them to take down the ad.

On Tuesday, Facebook responded in a letter to the Biden campaign that said the ad did not violate the company’s policy.

“Our approach is grounded in Facebook’s fundamental belief in free expression, respect for the democratic process, and the belief that, in mature democracies with a free press, political speech is already arguably the most scrutinized speech there is,” the New York Times reports Facebook’s head of global elections policy, Katie Harbath, wrote in the letter to the Biden campaign. 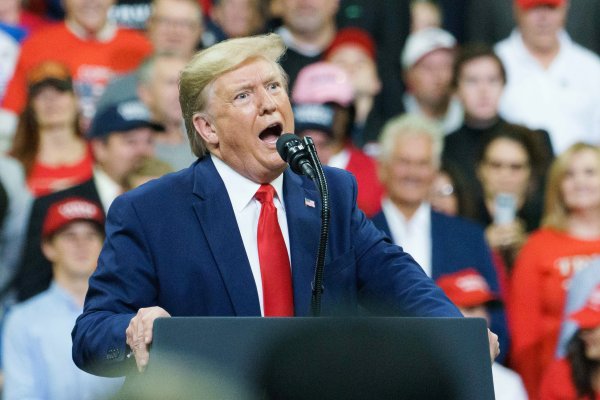 A Man Wearing a Colin Kaepernick Jersey Was Thrown Out of Trump's Minneapolis Rally. Here's What He Says Happened
Next Up: Editor's Pick