The World Probably Got Daft Punk'd at the 2014 Grammys

Update: Commenters have pointed out that the man in the suit looks like Paul Hahn (a member of the robots’ inner circle), and indeed he does, although it remains unclear. One thing is for sure: Whether they were or weren’t in costume — or even present at the awards — Daft Punk are doing an impressive job keeping the mystery alive.

There’s no question that Daft Punk got lucky at the 2014 Grammy Awards: After all, the dance duo claimed four awards, including the highly coveted prizes for Album of the Year and Record of the Year.

But did the world get daft punk’d along the way? Several blogs are claiming that the men inside the robot suits weren’t actually Guy-Manuel de Homem-Christo and Thomas Bangalter — meaning that yes, it’s entirely possible that two random (hired) dudes climbed on stage behind Daft Punk collaborators Nile Rodgers and Pharrell to accept a Grammy while the real Daft Punk chilled in the audience.

Take a close look at this video of them reacting to their Record of the Year victory, noting the man with the sunglasses (maybe Bangalter) and the man in the suit with longish hair (maybe Homem-Christo) who spend time hugging the robots, Pharrell and Rodgers.

Is this really them? It’s impossible to tell for sure, but this screenshot makes a compelling argument. They’ve done something similar before: Yahoo reports that the French duo used robot stand-ins during the filming of their 2006 art film “Electroma.”

But let’s back up: It’s common knowledge that the men behind the super-successful pair don’t like to speak or show their faces in public, even at big events. Despite this, it’s still relatively easy to find photos of them on the Internet, especially from their pre-fame days. Go ahead, just Google it. And just last year, the Internet roared with displeasure when the group’s labelmates, The Knocks, posted a picture of them sans helmets. So why would they take a risk and sit unmasked near cameras at a major award show (if indeed they did) when they could have just kicked their feet up at the Chateau Marmont, turned on the new episode of Sherlock and chowed down on some In-N-Out?

We’ll never know, but it may have something to do with the fact that Daft Punk has truly hit the mainstream, thanks in no small part to their big Grammy night. The publicity around their high-profile victories has created a flurry of interest about their music — sales of Random Access Memories have increased by 91 percent, while streams of “Get Lucky” on Spotify have gone up by 205% — as well as their mysterious personae. In the last few days, People and Us Weekly have both featured stories showing the DJ duo’s identities and faces.

But the true sign that they’ve made it? The duo was spotted decamping from LA by the paparazzi. Maybe it’s time to pull out those helmets again. 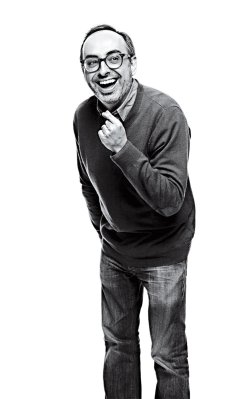 10 Questions with Gary Shteyngart
Next Up: Editor's Pick