I submit: one has never really gone out for a proper run, unless one has shuffled through a cornfield in Amish country, dodging a donkey who’s trying to kick you with its hind legs while passing gas in your face. That’s where I’ve found myself on this bright late-September morning in Peach Bottom, Pennsylvania, on a trot with author Christopher McDougall, his wife Mika, and a trio of asses. McDougall is the author of this century’s seminal book on running, the 2009 best-seller Born To Run, which tracked an indigenous group of ultramarathoners from the remote canyons of northern Mexico; their minimalist style helped spark a barefoot running craze. Born To Run has sold over 3 million copies, popped up in episodes of Orange Is The New Black and Big Little Lies, and made McDougall a star on the lecture circuit.

His newest book, Running with Sherman, touts the benefits of burro racing. Yes, burro racing; runners hold onto a rope attached to a donkey’s halter, and sprint alongside the animal. Sometimes the donkey cooperates. Other times, it kicks and farts. McDougall insists this flatulent burro attempting to punt me across the stalks is actually having a grand time. I’m not so sure.

Netflix has already optioned the rights to the book’s story, which begins some four years ago when McDougall – who moved from Philadelphia to a farm in Pennsylvania Amish country in 2002 – takes in Sherman, a donkey neglected by an animal hoarder. Sherman arrives with dung-crusted fur, rotten teeth and hooves “so monstrously overgrown,” McDougall writes, “they looked like a witch’s claws.” A friend has to trim them with a hacksaw. “He was catatonic, stunned and spiritless,” says McDougall now. “He looked like a stuffed animal.”

McDougall determines that if Sherman is going to survive, he’ll need a mission: training for the world championship of donkey running, which takes place in Colorado in less than a year. “Today, movement-as-medicine is a biological truth for survivors of cancer, surgery, strokes, heart attacks … you name it,” McDougall writes in Running with Sherman. “So why wouldn’t it also be true for Sherman, with the blood of wild African asses in his veins?”

Along the way to the donkey race, a rash of calamities befall on the humans training Sherman: a broken hand, foot, and vertebrae – none caused by a donkey – even a broken marriage. Despite these painful hiccups, Sherman and his brethren wind up helping their handlers just as much, if not more, than they aid the animals. Donkey running offers therapy for a depressed college student, and happiness for kids with autism and epilepsy. Sherman approached running on his own terms, so a stubborn donkey taught McDougall how to adjust to those around him. “If he wants to walk, he’s going to walk,” says McDougall, 57, during a break in our donkey workout. Tall and fit, McDougall’s bare-chested – though not barefoot – and wearing a red bandana. “Breath in, breath out, man,” McDougall says. “Not everything is on your clock.”

McDougall didn’t rush his way to nonfiction superstardom. After rowing for Harvard in the mid-1980s, he taught English in Spain for a few years before returning home to Philadelphia, where he played too much pickup basketball and considered law school. He declined a legal life, and once he realized his fondness for recreational hoops was impeding a return to Europe, he hustled back overseas. “I was on the fence about it because I really liked these courts, and my pickup game on South Street,” says McDougall. “I finally said to myself, really?”

An Associated Press editor in Madrid hired him as a correspondent, despite a clear lack of qualifications. Soon enough, the AP dispatched him to Angola, then Rwanda, before he returned to Philly again to try his hand at freelance writing. He got stories published in places like The New York Times Magazine and Runner’s World, and had a steady gig at Philadelphia Magazine before clashing with an editor. “I told him if you want to fire me, fire me,” McDougall says. “You can’t tell a guy from Philly to fire you more than twice.”

With his second daughter a week old, McDougall lost his health care benefits and two-thirds of his income. Luckily, he had already gotten wind of the Tarahumara tribe of super-athletes while reporting a story on Mexican pop star Gloria Trevi, who had been arrested in 2000, along with her then-manager, on charges of corrupting minors (Trevi was acquitted, while her manager was found guilty for the rape and kidnapping of an underage girl). McDougall’s dire circumstances sparked him to pursue a book on the Tarahumara; in the end, his firing was fortuitous.

While barefoot running emerged from Born To Run, Americans are unlikely to start donkey-trotting en masse if Running With Sherman catches on. (Though leave it some smart-aleck entrepreneurs to launch burro rental outfits in, say, city parks). McDougall, however, hopes some broader lessons break through. He’s convinced, for example, that it’s no coincidence that his Amish neighbors are generally healthier and happier than average Americans. We’re not going back to the horse and buggy. But a closer communion with animals and nature can only bring us benefits. “By actually focusing on another creature, you can take that compassion and attention into your own life, and the other people you’re talking to and dealing with,” says McDougall.

When our run continued down a local road, a driver pulled up to ask McDougall, who was holding Sherman with his rope, for directions to a local welder. He then tried to hand McDougall a religious pamphlet. McDougall told him to bug off, taking none to kindly to the proselytizing. “I think Sherman would look at me,” says McDougall, “and say, ‘we’ve got some work to do.’”

Now, it was my time to try my hand running with the book’s protagonist. (Matilda, one of Sherman’s pals, was the donkey kicking me). McDougall told me to stay behind Sherman and lightly tap his gray fur with my rope, while sort of growling a command — “Grrrreup” — to get him moving. “Grrrreup!” I yelled, with little conviction. “Grrrreup.” My barks seemed inadequate, but McDougall told me I had a “refined growl.” He may have just been buttering up a visiting writer, but “refined donkey growl” is a complement I never expected, and will gladly take.

Despite my growling expertise, Sherman still wasn’t moving. It takes awhile to earn his trust. But once he saw Matilda and his other donkey running partners ahead of him picking up the pace, Sherman’s ears perked up; he finally started moving. I clutched my rope before sprinting alongside the donkey, thinking Sherman and I were in lockstep. But the donkey stopped cold: I had forgotten McDougall’s directive to stay behind the burro. Just because Sherman would run with me, didn’t mean he wanted to see me.

Sherman turned his head and stared, as if to say “what the hell is wrong with you?” It’s a look McDougall knows all too well. Sherman’s message is as clear as the Pennsylvania sky. “I’m the donkey, goddamit,” says McDougall. “And now I have to teach you what to do?” 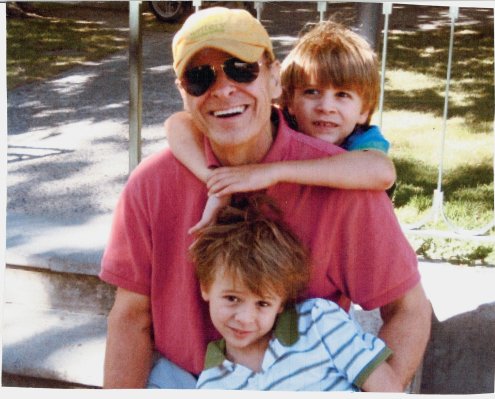 The Things They Carried Author Tim O'Brien Returns to Contemplate Fatherhood and America at War
Next Up: Editor's Pick