During a newly-released podcast interview, attorney George Conway, the husband of President Trump’s counselor Kellyanne Conway, suggested that Trump’s closest advisers should step down amid the impeachment inquiry.

George Conway was previously involved with legal work undertaken against then-President Bill Clinton in support of women alleging sexual misconduct and harassment, events that led to Clinton’s impeachment in 1998.

Conway appeared on the “Stay Tuned” podcast with Preet Bharara, the former United States Attorney for the Southern District of New York. When asked if his advice was for people in Trump’s inner circle to quit, Conway answered affirmatively.

“If you can’t have a positive effect on him and I don’t think anybody can, yeah,” Conway told Bharara. “I think the calculation they should be making is [that] he’s going to be gone at some point and there’s going to be a reckoning and history isn’t going to be kind to people who said nothing or stood up for Trump.”

Conway has been a vocal critic of President Trump in the past. In March, Trump responded in kind, labeling Conway as “VERY jealous” of his wife Kellyanne Conway’s success, and a “husband from hell” in a tweet.

When Bharara sounded like he was getting to ask specifically about his wife’s role in the administration, Conway quickly shut it down.

“Not going there,” Conway said. “But I think my position is clear.”

Kellyanne Conway speaks to members of the media outside the West Wing of the White House September 12, 2019 in Washington, D.C.
Alex Wong—Getty Images

Conway also spoke specifically to White House Counsel Pat Cipollone’s response to the impeachment inquiry currently underway in the House, with 225 members saying they support the proceedings. In a letter sent to Speaker Nancy Pelosi on Oct. 8, Cipollone said that the White House would block any cooperation with the House’s impeachment inquiry. Conway called the letter “trash.”

The White House is alleging that the inquiry “lacks any legitimate constitutional foundation, any pretense of fairness or even the most elementary due process protections” and that the Democrats have no basis for their inquiry.

“Basically the thrust of it is that there are some kind of constitutional obligations that the House has failed to meet that therefore render its impeachment inquiry illegitimate and unconstitutional, which is complete nonsense,” Conway explained. 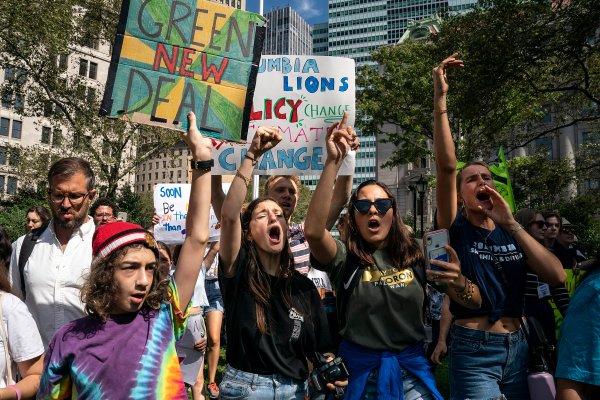 IMF Calls for Countries to Act on Climate Change
Next Up: Editor's Pick