'There Will Be a Recession. The Question Is When.' Nobel Prize-Winning Economist Robert Shiller Says a Recession Could Discredit President Trump

Nestled in an armchair in a high-ceilinged London reception room, the Nobel laureate Robert Shiller is asking me about the Streisand Effect. The term is used to describe a phenomenon whereby an attempt to remove a piece of information from the Internet actually has the opposite effect — bringing it to greater attention. It’s named after the actor Barbara Streisand, who tried to remove online pictures of her beachfront home, only for them to be shared more widely. Shiller, an economist who shared the 2013 Nobel Prize for his work on asset prices, has never heard the term before, and as I explain he leans forward, excited. “That’s a narrative!” he exclaims. He’s fresh from addressing a roomful of economists and policy wonks about his new book, Narrative Economics: How Stories Go Viral and Drive Major Economic Events. He spoke to TIME about the book, the odds of a recession, and the trade war with China.

What is narrative economics?

I define narrative economics as the study of popular stories that are economically relevant, that have a moral, that are a lesson that people will take heed of in their economic decisions.

You write that these narratives can and do shape the economy. Can you give me an example from the past of how a narrative has caused a recession?

The narrative that comes to my mind for the 2007 through 2009 recession is the housing narrative. There were a lot of people “flipping houses.” That was a new term. And the idea that home prices have always gone up was encouraged by the stories of people making a lot of money selling houses in that environment. There wasn’t much attention to the history of price declines. There was no counter-narrative.

How have economists failed to understand narratives in the past?

A lot of them do understand them, but they haven’t thought they were worthy of entry into their pronouncements. The problem is, as an economist you can’t rely on what people tell you on the street. But sometimes it does have real relevance. The problem is we don’t have the right kind of survey data. We have confidence indexes, but they are based on surveys which ask people for their outlook in quantitative terms, without asking about the story that is motivating them.

The ‘inverted yield curve’ has been in the news recently. Do you think the notion that it always precedes a recession is a ‘narrative’?

Yes. There’s a chart showing inverted yield curves, followed by recessions. So maybe people remember that visual stimulus. It’s very direct. People have memories of seeing it on the news in decades past. Now it has exploded and people are talking about it everywhere. I’m afraid that it will bring about a recession because if you think a recession is coming, your probable actions will be to reinforce that.

Is there something about nationalism that you think goes hand in hand with certain economic decisions?

Patriotic narratives are more contagious. I think angry narratives are often contagious. Tribal loyalties are prehistoric. People would tell stories in the past that elevated the tribe and give us a reason to fight for it as a unit. So narratives are part of human history. Even though we haven’t always had the internet and social media, we have had viral narratives.

Do you think there’s going to be a recession in the United States?

Well, there will be a recession. The question is when. I’m tempted to say that we’re overdue for one, because this expansion will be the longest in history. That’s assuming the economy isn’t already in recession. I’m thinking about the narrative and the stories I’m hearing. I think the talk of the recession is building up. The stories are coming in which are probably related to the trade crisis. And it’s going back to a 1930s narrative about a tariff war, a trade war. It’s unsettling people. It’s causing some people to curtail their spending. Distrust of President Trump is building.

How do you think Trump is trying to control the narrative on the trade war with China? And do you think the way that he’s framing that narrative has an impact on the economy?

He is constantly generating news. It’s what he did on his TV show. He would send people into conflictual situations, and then he would fire them at the end of the show. It’s a little bit like the wrestling that he was involved with, where he actually appeared in a wrestling TV show, punching another man. It’s what he knows. If we start a recession, it will discredit him. And public opinion could turn against him, and make him seem not so invulnerable. 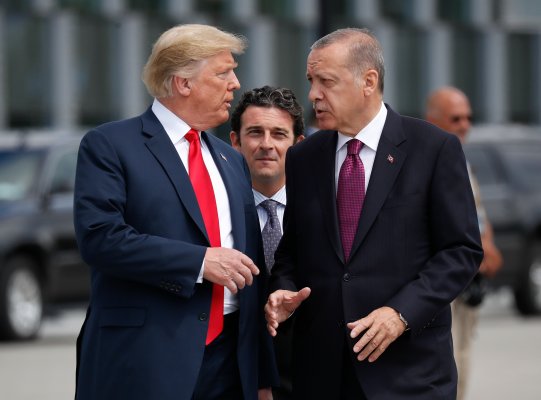 Trump's Retreat in Syria Is Dishonorable and Will Cost American Lives
Next Up: Editor's Pick