Lawmakers Hone Their Messaging on Impeachment

Democratic Congressman Tom Malinowski had planned to spend the October recess traveling around his majority-Republican New Jersey district talking about the federal legislative issues that affect his constituents.

But on Sept. 24, when House Speaker Nancy Pelosi launched an impeachment inquiry into President Donald Trump, all that changed.

Instead of just touting his recent votes, Malinowski found himself suddenly in the position of explaining — and defending — his decision to back the House Democrats’ impeachment process.

“We have decided to begin a process to consider whether the President should be impeached,” Malinowski solemnly told a crowd at a deli in North Plainfield, N.J. on Oct. 8. “This is a grand jury investigation. It’s not for us to convict him. It is for us to decide whether or not he merits trial for these actions. This is an incredibly serious process. It is a grave and somber process.”

As the House Democrats’ impeachment inquiry shapes up to become a pitched political battle on the eve of an election year, both Democratic and Republican lawmakers are testing out new language and messaging tactics surrounding how to talk about what’s going on in Washington in their home districts and states. Whereas House Democrats with largely liberal constituents, like Rashida Tlaib or Alexandria Ocasio-Cortez, have used impeachment as something of a rallying cry, members like Malinowski, who hail from competitive districts with large Republican populations, are employing much more staid language. They are underscoring that they only arrived at their support for an impeachment inquiry after careful consideration, with much regret. Several moderate Democrats told TIME that they’re working to show their constituents that their motives are not political.

Republican lawmakers, meanwhile, are also trying out different messages with their supporters this month. As public opinion swings against the President, and in favor of impeachment proceedings, some have also embraced a careful strategy, describing their unwillingness to support the House Democrats’ inquiry as merely pragmatic: it’s a distraction from other important legislative work. Others, speaking to a committed Republican base, are describing the Democrats’ impeachment inquiry as an unhinged vendetta against President Trump and an unconstitutional effort to reverse the results of the 2016 Election.

Malinowski, whose district leans Republican, according to nonpartisan Cook Political Report, has relied largely on earnest, even dour, language to describe the impeachment process. “I do not want to hear anybody jumping up and down for joy. Even if you hate on Donald Trump, this is not something you should be joyful about,” Malinowski told his supporters earlier this week. “It’s the most serious and grave thing that a Congress can do. And we are going to handle it in the most serious and deliberate possible way and then take it from there.”

Thirty miles north, in a majority-Republican district in New York City, Democratic Rep. Max Rose defended his recent decision to back the impeachment inquiry along the same lines. “People want to know that this is not a hyper-partisan thing,” he told TIME in an interview on Tuesday. “We have to make sure the American people understand this is a sad day…but the President brought us to this moment.”

Rep. Lauren Underwood, a freshman Democrat who flipped a Republican district in the suburbs of Chicago last year, also echoed Malinowski and Rose, underscoring that her decision to back the inquiry was not about politics. “We’re pretty united in letting the facts lead us and this idea of getting all the information that we need to protect our nation’s security. That’s what this is about,” she told TIME on Wednesday. “Any political consideration is something that really is not part of the conversation, I have to be honest with you.”

Underwood added that, in her district, impeachment is not dominating discussions like it is in the Beltway. She estimates that 95% of the conversations she has with constituents have nothing to do with the topic.

Minnesota Rep. Angie Craig, a freshman Democrat who flipped her slightly-Republican district in 2018, publicly backed impeachment proceedings at the end of September, before House Democrats announced their impeachment inquiry. She has since found herself the target of Republican attacks. Vice President Mike Pence is visiting Craig’s district today, as part of a tour of toss-up districts held by Democrats, and the Republican National Committee recently bought ads against her. (Trump himself will also be in Minnesota on Thursday for a Minneapolis rally.)

But, echoing Underwood, Craig says impeachment is not as important to her constituents as the national headlines might suggest. Over the course of ten days of events, only two constituents approached her to discuss impeachment, she told TIME on Thursday. As of Oct. 8, her office had received fewer than 400 calls on the subject, with 181 of them being pro-impeachment inquiry and 153 of them against.

“Whatever the politics end up being, I can tell you this,” she told TIME. “No matter if this was a Democratic president or a Republican president, blackmailing a foreign country to interfere and help you in your next election is just plain wrong. If you’re a member of Congress and you’re only worried about your next reelection, then you ought to step down and just not be a member of Congress.”

Malinowski, Rose, and Underwood also described their decision to back the impeachment process on moral grounds. “I didn’t run for Congress to be in Congress. I ran for Congress to do something, and to do what I think is right,” Malinowksi told TIME in an interview Tuesday.

Rose used similar language. “The thing that would doom not my electoral future but would make me undeserving of holding elected office would be if I did not do what I felt was right and I didn’t show integrity,” Rose told TIME.

The public seems to be receptive to Democrats’ arguments: a recent Washington Post-Schar School poll showed Americans were in favor of the Democratic-led inquiry, 58-38%.

But Republicans are betting that most Americans, even if they support it now, will grow tired of the impeachment drama. Sens. Rob Portman and Martha McSally have dismissed the impeachment inquiry by arguing that it was a distraction from more important legislative business, while Sen. Lindsey Graham, Sen. Marsha Blackburn, and Rep. Matt Gaetz have framed the Democrats’ investigation as a vendetta against the President.

“What we see in this impeachment is a kangaroo court and Chairman Schiff is acting like a malicious Captain Kangaroo,” said Gaetz at a recent press conference.

In a Tuesday op-ed ahead of his Wednesday visit to Iowa, Pence repeated a similar line. “While so many in Congress have spent the last two-and-a-half years on endless investigations, trying to overturn the will of the American people in the last election, our administration has fought for policies that create jobs and benefit American workers,” he wrote.

The White House struck an even harder note. “Your highly partisan and unconstitutional effort threatens grave and lasting damage to our democratic institutions, to our system of free elections, and to the American people,” White House counsel Pat Cipollone wrote in a letter to Speaker Nancy Pelosi and three committee chairmen on Tuesday meant to convey that the administration will not cooperate with the inquiry.

Some Republicans, like Sen. Joni Ernst, have opted simply to avoid discussing the topic at length. As CNN and Iowa Starting Line pointed out, the former military officer from Iowa repeatedly dodged questions about whether it was ethical for a president to ask a foreign country to investigate a political rival.

Less than a month into the Democrats’ formal impeachment inquiry, both Democrats and Republicans are mostly holding fast to their talking points.

In May, Rep. Justin Amash of Michigan became the only GOP lawmaker to back an impeachment inquiry, arguing that the contents of the Mueller Report showed Trump had met the “threshold for impeachment.” (Amash left the GOP in July and now calls himself an independent.)

In September, Republican Rep. Mark Amodei said he supports the House’s inquiry, but is withholding judgement on whether Trump’s actions constituted a crime. “Let’s put it through the process and see what happens,” the Nevada Congressman told reporters.

If the the impeachment inquiry culminates in the House voting on articles of impeachment, it is likely that Democrats will reach the simple majority needed to trigger an impeachment hearing in the Senate. Achieving the 67 votes necessary to convict Trump in the Republican-led Senate, however, is unlikely at this stage.

In the meantime, both Democrats and Republicans will continue to hone their messages at home.

“This is about establishing that there are still lines in this country that you should not cross,” Malinowski argued at his town hall, to applause. “If we just throw up our hands and say, ‘We don’t have the votes,’ it would be like a police officer seeing someone rob a bank and saying, ‘He might not get convicted… I’m just not going to make that arrest.'”

Write to Abby Vesoulis at abby.vesoulis@time.com and Lissandra Villa at lissandra.villa@time.com. 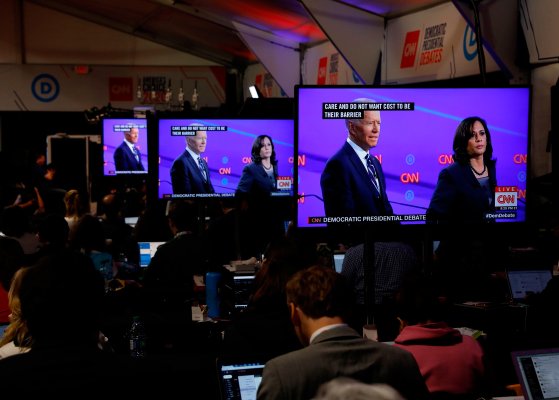 Survivors of Sexual Assault Are Voters Too. So Why Aren't the Presidential Candidates Paying Attention to Them?
Next Up: Editor's Pick