The Real History Behind HBO's Catherine the Great

When HBO’s new four-part historical drama Catherine the Great debuts on Monday — starring Helen Mirren as Russia’s longest-reigning female ruler — the story of the 18th century empress may seem surprisingly modern to 2019 viewers. After all, Catherine the Great, who held the throne from 1762 to 1796, is one of history’s most famous examples of a woman in power.

But not everything she’s famous for is actually true. Here’s what to know about the real Catherine the Great, including her political power and her power over men — the latter of which has generated more than its share of myths and misconceptions.

The woman who would become Catherine the Great was born the Princess of Anhalt-Zerbst, Sophia Augusta Frederica, on May 2, 1729, in a place called Stettin, then part of Prussia but located in what would now be northwestern Poland. In 1744, Russia’s Empress Elizabeth summoned 14-year-old Sophia to Moscow to marry the man who would become Emperor Peter III, and the Russian Orthodox Church re-christened her Catherine.

Catherine and Peter III’s marriage was on the rocks as soon as it began, so Catherine had a lot of alone time. (Their son, Paul I, was also taken away to be raised by Empress Elizabeth.) This period was a formative experience for her as a leader, says Virginia Rounding, author of Catherine the Great and a historical advisor to the show. “When she was grand duchess, in a marriage that wasn’t working, and having nothing to do at court except please the empress and stay out of trouble, she spent a lot of time reading,” says Rounding. Catherine became well-versed in French philosophy, the Russian language and the ins and outs of statecraft.

“She trained herself,” Rounding says, “learning and beginning to form the idea that she could do better than her husband.”

Peter III came to the throne in Jan. 1762 after the death of Empress Elizabeth, but he was extremely unpopular and only ruled for six months before being overthrown on June 28, 1762, by the imperial guards. Catherine was behind the coup, led by officer Grigory Orlov, because she feared for her personal safety, that her husband could divorce her, imprison her or order her executed.

Orlov forced Peter III to sign an abdication document, and Catherine faced no major challenge to her claim to succeed him. Peter III was strangled to death on July 17 during a fight.

During her time on the throne, Catherine the Great oversaw the expansion of the Russian Empire — as well as the conflicts that come with seizing new territory, like the Russo-Turkish War of 1768–1774. She also annexed Crimea, the status of which remains politically charged to this day.

“She built on the legacy of Peter the Great, who founded St. Petersburg [in 1703] and began the process of integrating Russia into Europe and the rest of the world. And she took it to a further level strategically, where [Russia] could compete with great powers in Europe,” says Rounding.

She was under “immense pressure,” says Simon Sebag Montefiore, author of Catherine the Great & Potemkin: The Imperial Love Affair. “She had a series of crises that threatened her hold on the throne. The war with Turkey against the Ottomans didn’t go well. Her son was coming of age, meaning might be able to seize power from her, and there was a huge peasant rebellion which involved the whole of south Russia.”

The Love Story of Catherine and Potemkin

Catherine the Great is said to have had about a dozen lovers throughout her reign — she was a “serial monogamist,” as Montefiore puts it — but Grigory Potemkin was the love of her life. She met him on the day of the 1762 coup that put her in power; he was part of the guard that overthrew her husband. Just 24 years old at the time, he was nearly a decade younger than she was. Scholars say the affair would be described today as an open relationship, based on their love letters, that lasted until Potemkin’s death in 1791 at the age of 52.

“Potemkin was sent off, with her blessing, to do the conquering for her in the south of Russia and expand the empire, and he helped choose other favorites for her so she could be satisfied until he came back,” says Rounding. Paradoxically, “she needs to be loved, and is not happy on her own, despite ruling on her own.”

Montefiore points out that Catherine and Potemkin were arranging companions for one another, and that the relationships were not always sexual in nature.

They are thought to have secretly married, but a public wedding would have been out of the question, scholars say.

“She couldn’t marry anybody because I don’t think she wanted to have shared power with a public husband,” says Montefiore. “And as a usurper, marrying someone from a minor Russian family like Potemkin would have damaged her enormously.”

Montefiore sees their relationship as instructive for today.

“It’s one of the few cases in all of world history of a political partnership between a powerful woman and an almost equal male partner,” says Montefiore. “This was unusual because she was the senior part of the partnership, but they basically ruled together, like co-tsars, and they ruled together with enormous success. For modern times, she represents a feminist ideal, an inspiring, sexually-liberated woman who took control of her destiny and overcame the cruelty of her unsatisfactory marriage.”

Ever since the HBO series was announced, one question has come up repeatedly among some potential viewers: how will the series address the most infamous story about its subject? Helen Mirren has been getting the same question since she took on the role:

That story is the one that says Catherine the Great died while trying to have sex with a horse. But that story is just a myth.

Catherine the Great liked horses and has been painted on horseback, but there is no consensus on who started the rumor or when. Experts on the ruler say it is thought to have been ginned up out of jealousy at some point in order to damage the legacy of the powerful female ruler, who some claimed had slept her way to the top.

“It’s not even worth discussing,” says Montefiore. Whatever that story suggests, “she was not a nymphomaniac.” 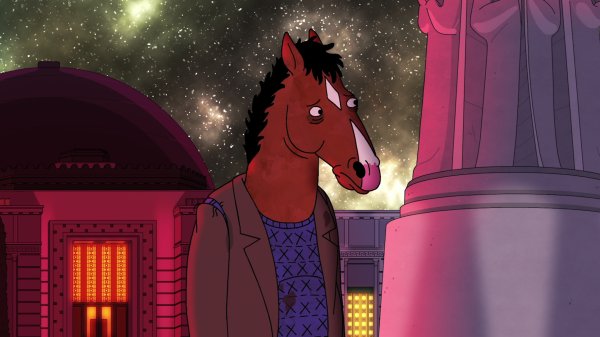 BoJack Horseman's Final Season Proves Why It’s the Most Important Animated Series Since The Simpsons
Next Up: Editor's Pick