Coleen Rooney, who is married to former England player Wayne Rooney, has accused the wife of another British soccer player of leaking fake stories about her to the tabloid newspaper The Sun. A new statement from Rooney, in which she details the honeytrap she laid out to catch the alleged culprit, has transfixed the internet in the U.K. and beyond — you don’t need to be well-versed in British tabloid culture (and the celebrities it tracks) to appreciate the modern-day detective work at play.

“For a few years now someone who I trusted to follow me on my personal Instagram account has been consistently informing THE SUN newspaper of my private posts and stories,” Rooney, who has long battled tabloid exposes, most famously detailing her husband’s infidelities, wrote in a statement shared to her Twitter and Instagram accounts. She then laid out the lengths she went to identify the person she claims is responsible. Do take notes.

To figure out and prove who the informer was, Rooney explained that she blocked everyone with access to her private Instagram from viewing her stories — except for one account owned by the person Rooney wrote she had become suspicious of. Rooney then posted a number of fake stories that would only be visible to the one account not blocked.

“Over the past five months I have posted a series of false stories to see if they made their way into the Sun newspaper. And you know what, they did!” Rooney wrote. “I have saved and screenshotted all the original stories which clearly just one person has viewed them. It’s……….Rebekah Vardy’s account.”

Vardy is the wife of English soccer player Jamie Vardy, who also plays for the national team. Vardy is well-known for her appearances on the British daytime talk show Loose Women, and also for taking part in the 2017 series of the very popular British reality show I’m A Celebrity… Get Me Out Of Here!

Rooney said that the false details she shared included her a story on her researching “gender selection” treatment in Mexico, another on her considering a return to TV hosting, and one about something as mundane as the basement in her home flooding. Articles on all these subjects have been published in The Sun — one in August about “gender selection” treatment in Mexico,” one in September about Rooney’s supposed revived TV career and one in October about her house flooding.

A representative for The Sun says the publication does not have a comment on the matter, but pointed TIME to its own coverage of the ongoing fallout between Rooney and Vardy. In that piece, The Sun claims it reached out to Rooney’s representatives for comment on each of the stories she claims Vardy leaked, but that they declined to comment.

Vardy was quick to deny Rooney’s accusation. In an Instagram statement of her own, she claimed that other people have had access to her Instagram account and inferred they could/would be the responsible parties. “I’m not being funny but I don’t need the money,” she wrote. “What would I gain from selling stories?”

“If you thought this was happening you could have told me & I could have changed my passwords to see if it had stopped,” she wrote. “I like you a lot Coleen & I’m so upset that you have chosen to do this, especially when i’m heavily pregnant.”

Rooney’s investigation and conclusion put Twitter in a tizzy Wednesday morning. The Twitter hashtag “WAGatha Christie” — a portmanteau of the “WAG” nickname and the famed British detective novelist Agatha Christie — has been trending widely. 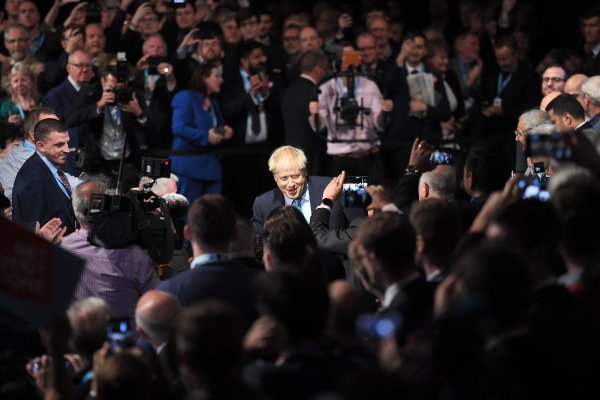 As Scandals Loom Over Boris Johnson, the U.K. Prime Minister's Base Stays Strong
Next Up: Editor's Pick