I Oversaw DHS Refugee Affairs. Here Are 3 Ways the Trump Administration Is Trying to Mislead You

Rohingya children climb the slope of a hill at the Kutupalong refugee camp in Ukhia on September 13, 2019.
Munir Uz Zaman—AFP/Getty Images
Ideas
By Barbara Strack
Barbara L. Strack retired from U.S. Citizenship and Immigration Services (USCIS) in January 2018 and now serves on the Advisory Committee for the Church World Service Immigration and Refugee Program.

Last month, as part of an annual exercise to set the number of refugees who can come to the U.S., the Trump Administration proposed a cap of 18,000 in fiscal year 2020. This number, far below the 30,000 refugees who were admitted to the U.S. this fiscal year, which ended September 30, is the lowest ever under the Refugee Act of 1980, continuing the downward spiral under Trump’s tenure.

The Administration tries to justify this retreat from core American values — offering protection to the world’s most vulnerable — through a series of half-truths and irrelevant assertions. I know, because I served as the head of the Refugee Affairs Division at the Department of Homeland Security from 2005 to 2018, working as a career official in both Republican and Democratic administrations.

We’ve heard the President disparage family-based “chain migration,” which allows families to reunify through the immigration system, and vow to end the diversity visa program, which provides visas to people from countries with low immigration rates. Now he’s targeting refugees in his war against legal immigration. Instead of candidly acknowledging this, however, his administration offers up a series of transparent excuses.

1. The Administration argues that overseas refugee resettlement needs to be low because domestic asylum claims are high. When he announced the new refugee ceiling, Acting Homeland Security Secretary Kevin McAleenan cited the need to deal with the crisis at the southern border and to reduce the asylum backlog as reasons for the decision. This is a smokescreen: in fact, the government can handle both. There are approximately 40,000 refugees overseas already approved by DHS, who are subject to rigorous security checks and health screenings before they can travel to the U.S. These 40,000 “pipeline” cases could still travel to the U.S. over the next 12 months.

2. The Administration asserts that it is taking foreign policy into account, as if past administrations did not. Nonsense. Every administration has considered refugees’ humanitarian needs in the context of foreign policy and national security interests. Just a glance at the nationalities that have been prioritized over time — Vietnamese, Cubans and Iraqis (to name a few) — clearly illustrates the foreign policy dimension. The Administration also argues that we should prioritize assistance to refugees overseas in lieu of resettlement. This is misleading. Even at recent high-water marks for resettlement worldwide, 99% of refugees remain in host countries close to home, with monetary support from donors including the U.S. Voluntary return by refugees to their homelands is much desired, but rarely achieved at significant scale. The Trump policy simply leaves stranded the most vulnerable one-half of 1% of refugees who used to be identified for resettlement to the U.S. — including people with medical needs, survivors of torture and those who are not safe in their country of first asylum.

3. The administration indicates that it is prioritizing three groups: refugees fleeing religious persecution, vulnerable Iraqis and Central American refugees. While the administration is setting aside a certain number of resettlement slots for these groups, the reality is that this is still a drastic cut to the number of people resettled in every category.

Religious persecution has been part of the refugee definition since 1951, and it has always played a significant role in the U.S. program. Christians, Jews, Muslims, Hindus, Yazidis, Baha’is and others who have been persecuted have found safety and freedom to worship in this country. The Administration’s allocation of 5,000 slots to religious minorities represents a sharp dip from just a few years ago.

In the fiscal year 2016, the U.S. resettled 9,880 Iraqi refugees, compared to just 465 Iraqis resettled this year under Trump’s regime. As of July, there were nearly 15,000 Iraqis in the U.S. resettlement pipeline — both inside and outside Iraq — but only about 2,000 have been interviewed to date. Setting the cap at 4,000 Iraqis is a dramatic reduction from past administrations, hurting Iraqis who have worked closely with the U.S. military, diplomats, journalists and aid workers. It sends a message to our allies that we don’t keep our promises.

In the one area where there is a true connection between overseas refugee processing and the humanitarian crisis at our southern border, the Administration’s proposal to admit up to 1,500 refugees from El Salvador, Honduras and Guatemala is insufficient. We can anticipate more asylum seekers from these countries, even as the Administration pursues controversial policies to force them back to Mexico and beyond. This is a draconian response to a region facing a humanitarian crisis.

After these earmarks, 7,500 resettlement slots remain for the rest of the world’s 26 million refugees.

Trump’s policy ignores humanitarian needs on every continent, cements the U.S. retreat from our longstanding leadership as the most generous resettlement country in the world and diminishes U.S. influence over the violent and destabilizing roots of refugee migration. Worse, it confirms to Americans and to the world that the new status quo of fear, division and racism in the refugee policies of the United States. We are not only leaving behind tens of thousands of refugee families at risk, but our own values and interests. The U.S. can and must do better. 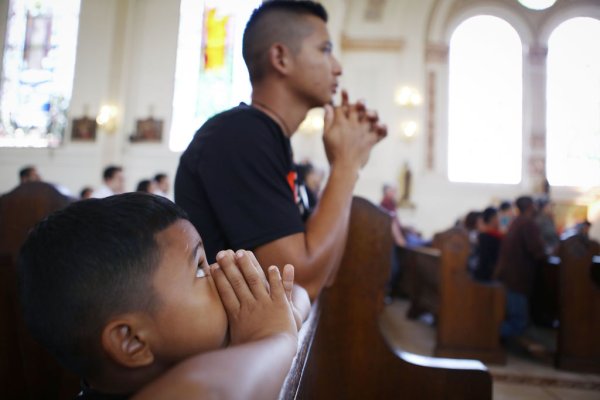 Everything To Know About The Status of Family Separation
Next Up: Editor's Pick