President Donald Trump speaks to the press before boarding Marine One on the South Lawn of the White House on October 4, 2019, in Washington, D.C. Trump has ordered a substantial reduction in the staff of the National Security Council, according to White House sources.
The Washington Post—The Washington Post/Getty Images
By Jennifer Jacobs and Justin Sink / Bloomberg

President Donald Trump has ordered a substantial reduction in the staff of the National Security Council, according to five people familiar with the plans, as the White House confronts an impeachment inquiry touched off by a whistle-blower complaint related to the agency’s work.

Some of the people described the staff cuts as part of a White House effort to make its foreign policy arm leaner under new National Security Adviser Robert O’Brien.

The request to limit the size of the NSC staff was conveyed to senior agency officials by acting White House Chief of Staff Mick Mulvaney and O’Brien this week. The whistle-blower complaint, focused on Trump’s conduct in a July 25 phone call with Ukrainian President Volodymyr Zelensky, has been followed by damaging reports on the president’s private conversations with other world leaders.

The New York Times has reported that the whistle-blower was a CIA officer who was at one point detailed to the White House. The complaint has become the driving motivation behind House Democrats’ impeachment effort, which House Speaker Nancy Pelosi began last week.

Two of the people familiar with the decision to shrink the NSC insisted it was largely rooted in both the transition to O’Brien’s leadership as well as Trump’s desire to increase efficiency at the agency, which grew under former President Barack Obama. About 310 people currently work at the NSC.

All of the people asked not to be identified because the plan to reduce the NSC’s size hasn’t been made public.

Late Friday, Trump re-tweeted an allegation that the whistle-blower was a CIA official who had been assigned to the NSC under President Barack Obama. Bloomberg News has not verified that assertion.

The reductions will primarily be carried out through attrition, as staffers return from assignments at the NSC to their home agencies, the people said. Many people who work at the council are career government professionals detailed from the Pentagon, State Department, and intelligence agencies.

Members of Congress have periodically sought to reduce the size of the NSC in recent years. Some lawmakers have threatened to make the national security adviser a Senate-confirmed position if the administration didn’t reduce the number of people working at the president’s foreign policy shop.

Created under President Harry Truman in 1947, the NSC is an interagency panel designed to provide the president with subject-matter experts who can offer advice on foreign policy.

O’Brien took over the NSC last month after his predecessor, John Bolton, departed the administration after high-profile disputes with Trump and Secretary of State Michael Pompeo over Afghanistan, North Korea and other matters. There was also frustration among some West Wing officials about perceptions the NSC was leaking information to benefit Bolton.

Earlier this week, O’Brien appointed Alex Gray, formerly the National Security Council’s Oceania and Indo-Pacific security director, to be a senior adviser, according to three people familiar with the plan.

Gray’s appointment follows that of Matt Pottinger, who is now deputy national security adviser after serving previously as the NSC’s senior director for Asia.

Pottinger, a former journalist and Marine who joined Trump’s National Security Council in 2017 and later became senior director for Asia, has been deeply involved in U.S. talks with North Korea over its nuclear weapons program, and helped to plan Trump’s meetings with the country’s leader, Kim Jong Un. 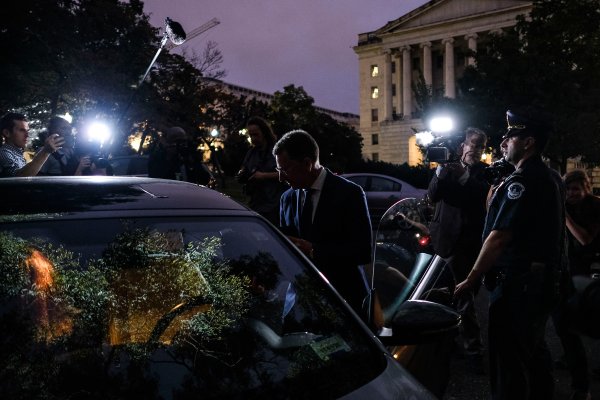 'The Reboot of US-UKRAINE Relationship.' Here's What To Know About Newly-Released Texts Between Trump Diplomats and Ukrainian Presidential Aide
Next Up: Editor's Pick