'My Mind Is Alive.' Taylor Swift Got Hilariously Weird About Bananas in This Post-Lasik Surgery Home Video

If you want to make Kristen Bell cry, show her a sloth. If you want Taylor Swift cry, give her a banana.

Swift was in for a big surprise, when she stopped by The Tonight Show on Thursday. The Lover singer had recently undergone LASIK eye surgery and her mother recorded a video of her post-surgery haze and shared it with Jimmy Fallon who shared it with the world. The best part about the video is that Swift had no idea that it existed. The second best part of the video is that it includes her crying over a banana.

On the show, Fallon revealed to Swift that he was about to debut the world premiere of a never-before-seen video of the singer post-surgery. Swift seemed truly surprised, asking Fallon: “What’s happening right now?”

Fallon rolled the tape, showing Swift in a pair of LASIK goggles trying to rip a banana from its bunch. When she managed to grab one from the stem, an upset Swift whimpers: “That wasn’t the one I wanted” and then starts to cry as she explains to her mother she wanted a different banana. When her mother tells her she will eat the banana Swift didn’t want, Swift says: “But it doesn’t have a head.”

The video was such a surprise, that it nearly derailed the rest of the interview. “I’m sorry, I can’t think about anything else,” Swift said when Fallon tried to bring up her upcoming musical guest slot on Saturday Night Live. 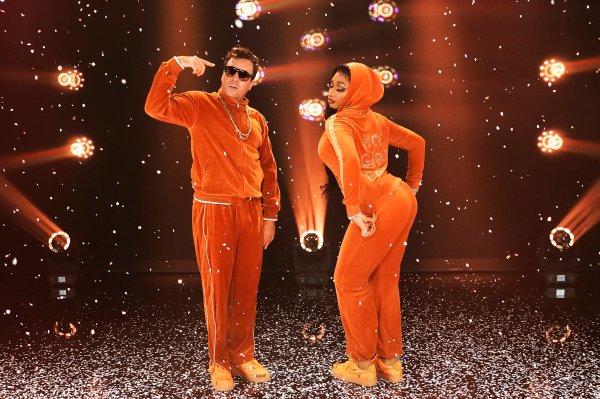 It's the Season to Get Lit on a Hayride as Megan Thee Stallion and Jimmy Fallon Usher in Autumn With Hot Girl Fall
Next Up: Editor's Pick