John Myers II, center, is escorted from the Morgan County Courthouse Friday, Dec. 1, 2006, after receiving a sentence of 65 years in prison for the murder Jill Behrman, 19, in May 2000.
Chris Howell—The Herald-Times/AP
By Gina Martinez

A federal judge has ordered the release of a man convicted for the 2000 murder of an Indiana University student, ruling that his lawyers were ineffective and violated his sixth amendment rights — a decision one expert calls “very rare.”

On Monday, Indianapolis U.S. District Court Judge James Sweeney II granted John Myers II’s petition for a writ of habeas corpus, which orders his release from custody unless the state elects to retry him within 120 days. Myers has already served over a decade of his 65-year prison sentence.

In 2006, Myers was convicted in state court in the murder of Indiana University freshman Jill Behrman, who went missing before she was scheduled to arrive at work. While the bike she was riding was found days later, her remains were not discovered until 2003 after hunters found them in a wooded area in a nearby county.

According to the Indianapolis Star, investigators believed that Myers killed Behrman, a stranger to him, because he was upset his girlfriend at the time had broken up with him.

Myers initially challenged his conviction in state post-conviction proceedings, but was unsuccessful. He then went to federal court and sought a writ of habeas corpus—arguing that his lawyers provided ineffective defense during the trial, and that prosecutors presented false evidence and withheld exculpatory evidence.

In a 147-page order released on Monday, Sweeney determined that Myers’ counsel’s ineffectiveness violated his Sixth Amendment right, which guarantees all accused the right “to a speedy and public trial…and to have the assistance of counsel for his defense.”

Myers had been represented at trial by lead attorney Patrick V. Baker, as well as Hugh Baker.

“Mr. Myers’s counsel made false statements to the jury during opening arguments,” Sweeney wrote, “which the counsel admitted to the Indiana Supreme Court in a subsequent attorney disciplinary proceeding. (They) also failed to object to two significant categories of evidence that should not have been presented to the jury.”

“In the end, these serious errors all but destroyed the defense that trial counsel presented to the jury and tainted the entire trial,” he added.

According to the Indiana Supreme Court, the false statements included the claim that search dogs were sent out shortly after the victim’s disappearance, and while one dog was “alerted” at the home of Behrman’s married co-worker, Mr. Hollars, the dog was called off. “These statements were false and Respondent should have known that no evidence would be admitted at trial to support them,” the Indiana Supreme Court said.

The lawyers also falsely claimed that Hollars and Behrman were seen arguing days before she disappeared. According to Sweeney, one of Myers’ attorneys’ theories presented to the jury was that Behrman was having an affair with Hollars, got pregnant and Hollars killed her to “cover it up.”

According to Sweeney, “the cumulative prejudice flowing from these errors is sufficient to entitle Mr. Myers to relief.”

Despite being suspended for practicing law for at least six months in 2011 for his false statements in his opening arguments in the Myers’ case, lead trial attorney Patrick Baker tells TIME in a statement that he is “very pleased” with the ruling.

“Our legal team initially took on Mr. Myers’ murder case in April of 2006 pro bono because we believed in his innocence, as we still do,” Baker said. “We fight for the Constitutional rights of our clients, and when necessary, take on difficult and unpopular causes in the interest of justice. We are very pleased the Court’s Order has given John Myers and his family renewed hope. We express our heartfelt sympathies to the Behrman family and will continue to pray for all involved.”

In a statement to TIME, Jill’s mother, Marilyn Behrman, says she is “disappointed in this ruling, especially after so many years.”

“I do trust the justice system and the process, so I will take this one day and one moment at a time and will deal with it,” she added. “I am more concerned with the emotional toll this may take on family and friends. I believe I am stronger now than I was the first time around and I know Jill would be proud of me for that.”

Hugh Baker and a third lawyer, Mike Keifer, who only entered an appearance in order to read the grand jury transcripts, did not immediately respond to TIME’s request for comment.

Meanwhile, the Office of the Indiana Attorney General says in a statement obtained by TIME that “we respectfully disagree with the federal court’s decision. We believe the Indiana courts handled this case appropriately. We continue to carefully review this ruling and will vigorously pursue justice.”

The office also said that it will review the case to determine whether or not they will retry Myers.

While wrongful convictions are frequently overturned, Molly J. Walker-Wilson, a law professor at Saint Louis University School of Law, tells TIME that it is “very rare” for murder convictions to be vacated due to ineffective counsel.

“The burden for defendants seeking to overturn a conviction on the grounds of ineffective assistance of counsel is substantial,” she says. “Statistically speaking, the vast majority of such attempts fail.”

Anne Geraghty-Rathert, a professor of legal studies at Webster University in St. Louis, tells TIME that she is “very surprised,” at Sweeney’s decision.

“It looks like the judge granted a writ of habeas corpus based on an ineffective counsel that is almost a non-starter in the United States,” she says. “The standard for the ineffectiveness of counsel are almost impossible to meet, so even for cases where we have lawyers falling asleep at the counsel table and all these things people challenge that as ineffectiveness of counsel and they never win-so for this decision it must be really egregious.”

According to Geraghty-Rathert, most murder convictions are overturned by exculpatory DNA evidence, so Myers’ case is unique.

“The Sixth Amendment guarantees you an attorney in all criminal matters. However, up to this moment it’s been basically if there is a counsel, an attorney, sitting next to you—that’s almost good enough to count no matter what that person is doing,” she tells TIME. “So there have been a lot of wrongful conviction cases that have been brought to life by DNA exoneration in the last 10 years, but it’s highly unusual to have an ineffective assistance of counsel case.”

Behrman’s murder was one of the most high-profile murder cases Indiana had seen in years, but the case against Myers was not that straightforward.

According to court documents, the case initially had many false leads, including a woman named Wendy Owings who confessed to police in 2002 that she was in a car that struck Behrman. Owing told police that the driver of the car, Uriah Clouse, stabbed Behrman in the chest then wrapped her body in plastic and dumped her in a creek. She later recanted her statement.

When Behrman’s body was found, authorities determined her cause of death was a shotgun wound to the back of her head.

Myers drew the attention of investigators in 2001 when he contacted authorities to report finding a bone and women’s underwear near where he had gone fishing.

While serving jail time in 2002 for unrelated charges, Myers also told a correctional officer that he found letters in a food tray that contained information regarding Behrman’s disappearance, and then provided authorities with a list of locations where Behrman could be found.

In his order, Sweeney acknowledged that a possible retrial would be difficult for Behrman’s family.

“A new trial will likely come only at considerable cost — to the State, yes, but, more important, to the victim’s family and community still wounded by their tragic loss,” the judgment read. “Such cost do not enter into the constitutional analysis; and yet, the Court cannot help but express its empathy for those who must bear them for the sake of our Constitutions and its protections.” 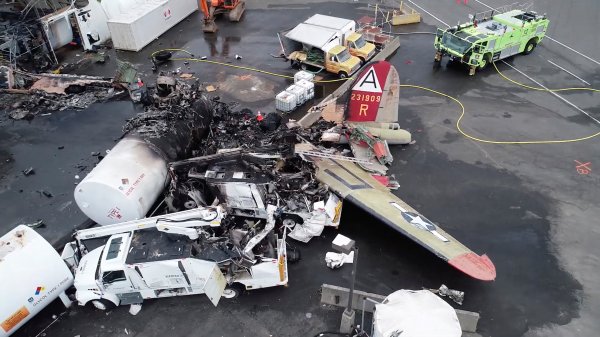 'These Are Flown Safely Every Day.' A Deadly B-17 Crash Raises Questions About Vintage Aircraft Rides
Next Up: Editor's Pick