Former Dallas police officer Amber Guyger has been sentenced to 10 years in prison for the murder of her former neighbor Botham Jean in September of last year.

The jury deliberated the sentence for about two hours after hearing testimony from Jean’s parents, friends and coworkers, who sometimes spoke through tears about the 26-year-old remembered for his academic achievements, love of music and devotion to his family.

In a personal impact statement after sentencing, Botham’s younger brother told Guyger he forgave her and embraced her in a long hug. “I love you just like anyone else,” he said. “I personally want the best for you.”

Several witnesses also spoke on behalf of Guyger, including family members, friends, three Dallas police officers and a woman who credits Guyger with helping her through her addiction.The jury previously found Guyger guilty of murder Tuesday, and she was facing 5 to 99 years in prison. Applause could be heard from the audience and Jean’s family could be seen in tears after the verdict was announced.

The jury deliberated Monday afternoon and Tuesday morning over whether Guyger was guilty of murder or manslaughter when she shot her upstairs neighbor on Sept. 6, 2018. Guyger was still in uniform when she fatally shot Jean, and had just ended her shift when she returned to the apartment complex where they both lived in Dallas.

The case has received national attention following a nationwide debate about police misconduct against people of color. Guyger is white and Jean was black. Judge Tammy Kemp reignited the debate on Monday after deciding the jury could consider the state’s “Castle Doctrine,” a legal exception that says a person in their home is not required to retreat before using deadly force on an intruder.

“This is a victory for black people in America,” Jean family attorney Lee Merritt told reporters after the verdict was announced.

Guyger is now the third officer in Dallas County to be found guilty of murder since 2016, according to The Dallas Morning News, and a fourth has yet to start trial. Before 2016, it had been 40 years since a police officer faced murder charges in the Dallas area, according to the News. The last was Darrell Lee Cain, who was convicted of murdering a 12-year-old boy, Santos Rodriguez.

What happened during the sentencing?

Sentencing began Tuesday with Jean’s mother, Allison Jean, who took the stand about three hours after the guilty verdict was announced. She told the court more about her son’s life, including his academic achievements and how he started a choir while a student.

“I always refer to him as the glue between my three kids,” she told the court. “He assumed the role of big brother although [his sister] was 10 years older than him.”

Allison Jean became emotional as she testified about how she learned of Botham’s death. She said she was in New York with her daughter when her daughter gave her the news.

“My life has not been the same. It’s just been like a roller coaster, I cannot sleep, I cannot eat. It’s just been the most terrible time for me,” she said. “I’ve been sick often. I have to try to keep the family together because everybody is in pain.”

She added she’s very concerned for her youngest son, Botham’s younger brother, whom she said has been very quiet since Botham was killed.

“I still want to see him,” Bertram told the court. “I’ve never experienced a close death inside my family. It’s hard not hearing his voice.”

Karen Guyger, Amber Guyger’s mother, was the first witness to testify on her behalf, and said that her daughter had been sexually abused as a 6-year-old girl.

Karen Guyger said Amber expressed an interest in joining law enforcement when she was a child, and dropped out of her university studies when a spot opened up at a police academy.

“She told me she wishes she could take [Jean’s] place,” Karen Guyger said. “She feels very bad about it.”

Macpherson was questioned by the prosecution during sentencing about text message conversations between him and Guyger in which they made what were categorized as “derogatory” and “disrespectful” comments about their supervisor.

The prosecution utilized text message conversations from both Guyger and Jean throughout sentencing, including statements made by Guyger in private text conversations that mocked a Martin Luther King, Jr. parade and her black coworkers.

The prosecution also brought up a text conversation between Guyger and Dallas police officer Martin Rivera, whom she had been having an affair with.

Guyger replied: “Not racist but just have a different way of working and it shows.”

What were the allegations?

Guyger was originally charged with manslaughter three days after the shooting took place. She was later fired by the Dallas Police Department and charges were increased to murder. The jury had to decide if she was guilty of either murder or the lesser charge of manslaughter.

In closing arguments Monday, Guyger’s defense argued that the state had to prove beyond a reasonable doubt that her actions weren’t self-defense. “You don’t, as the jurors in this case, decide this case on emotion and sympathy,” defense attorney Toby Shook said, addressing the jury. “Who would not have sympathy for Botham Jean? Wonderful human being … but that is not part of your consideration as a juror.”

The prosecution argued that Guyger could not claim self-defense if she was the intruder in the wrong apartment, and that she missed key cues along her path from her car to Jean’s apartment that should have made her aware she was in the wrong place. The defense also used explicit text message conversations between her and another police officer as evidence and argued Guyger was not tired after a lengthy shift, but distracted.

What happened in the trial?

The trial lasted seven days, during which time jurors hears testimony from Guyger, Texas Rangers who led an investigation, Jean’s neighbors and Dallas Police officers. Jean’s family was present for most of the trial.

During closing statements on Monday, prosecutor Jason Fine said Guyger missed five cues that should have alerted her that she was at the wrong apartment, and said the jury should think from Jean’s perspective. “Nobody had to die. She caused his death. She acted unreasonably,” he said.

Amber Guyger took the stand on Friday, the fifth day of the trial. Through tears she told the court she was sorry, and said she wished it had been her who died that night.

“I never wanted to take an innocent person’s life,” she said. It was the first time she’s spoken publicly since the shooting.

Jean’s neighbor from across the hall, Joshua Brown, also testified, telling the court he met Jean for the first time shortly before Jean was shot. Brown became emotional after he describing that he would often hear Jean singing gospel or Drake songs inside his apartment.

Will this verdict impact future cases?

Some experts believe it’s hard to say exactly how this verdict could impact other incidents of police officers killing unarmed black men, mostly due to the unusual circumstances of the Guyger case.

“The facts of the case are bizarre, they really don’t make much sense,” Philip Stinson, a criminal justice professor at Bowling Green State University tells TIME. “It’s very unusual that even an off-duty police officer would lose situation awareness and not be aware that she’s entering an apartment that was not hers.”

Stinson is a former police officer in Virginia and New Hampshire. He also collects data on all the police misconduct in the country.

He says that because Guyger was off-duty, the jury likely had an easier time deciding her guilt, as opposed to other notable incidents of police shootings where the officer is on-duty.

“In those cases juries are very reluctant to second guess the split-second life or death decisions of the police officer in a potentially violent encounter,” Stinson says.

Joseph Pollini, a criminal justice professor at John Jay College and a former NYPD detective, says that this case and verdict was simply an example of the justice system doing its job.

“The judicial system worked, it determined what the true facts of the case were and that the officer was wrong,” Professor Pollini tells TIME. “From that end it would be positive.”

However, Pollini stresses that this situation it was easy to see that officer Guyger was in the wrong and that in most cases when the circumstances as clear, the scale is usually tipped in a police officer’s favor.

Both professors also say that because these cases happen in different states with different laws and individuals, it’s hard to compare one case to another.

They do believe that Guyger’s guilty verdict could change how some people see the way police are dealt with in the judicial system.

“I think it may go a long way in helping people of color understand that it is possible to get justice in these cases,” Professor Stinson says. “Sometimes the police are held accountable.” 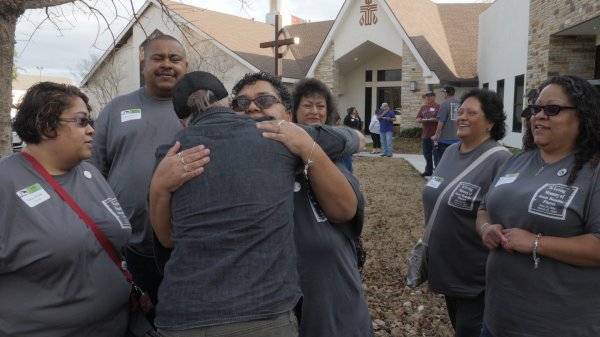 Descendants of 1918 Porvenir Massacre Fight For Recognition
Next Up: Editor's Pick