‘We Know How to Keep the Balance of Nature’. Why Including Indigenous People Is Vital to Solving Climate Change

Hindou Oumarou Ibrahim, from the Mbororo pastoralist community in Chad, has spent a decade trying to get international policy on climate change to consider perspectives from indigenous communities like her own. In the lead up to the historic 2015 climate-change meetings in Paris, she was designated as co-chair of the International Indigenous Peoples Forum on Climate Change, established in 2008 as the caucus for indigenous people participating in the U.N. Climate Summit. And she has worked with the government of Chad on their Nationally Determined Contributions plan to cut greenhouse gas emissions in a feasible way.

Ibrahim tells TIME what lessons indigenous communities hold for the rest of the world in protecting the environment and mitigating and adapting to climate change.

There cannot be a solution to combat climate change if it does not include indigenous people. The wisdom we hold is based on living in harmony with nature. We know how to keep the balance of nature. If you are in Paris or New York or any big city, if it’s hot outside, you can turn on the air conditioning. But in a community like ours, you have to be creative. When we build houses, we know the windows need to face a particular way so wind can enter. This kind of basic, grassroots knowledge is just one way in which indigenous communities are mindful of the environment. Including indigenous people in decision-making can help us reach a climate solution in a quicker, more sustainable way.

Climate policy at the international level still does not provide enough representation for indigenous communities. Most climate policies and solutions are not being designed for the people, by the people, with the people. Often, they are designed by experts with a masters degree or PhD. But that’s not enough. A lot of expertise is local. Locals are experts of their own land in ways that academics are not. Our solutions are not only about writing reports that barely anyone in my community can make sense of. There is a misconception that if you don’t know the technical words, you do not understand climate. But that’s not true.

When I was working with meteorological experts with the government at the international level, I invited them to visit us. They would usually not venture beyond towns but they agreed. For them, we probably appeared to be exotic people. During their visit, some women from the community told them: “it’s going to rain.” They didn’t believe it would because they did not see any clouds. But the rain came down heavy in the next few hours. The meteorological experts asked how the community knew. It was because the women saw insects taking their eggs down to their nest. An insect cannot check its smartphone meteorological app to know whether it is going to rain. They were impressed by our observations and we decided to talk about ways to exchange our knowledge and organized a workshop for the community.

In Chad, our calendars have different seasons that are based on the ecosystem. Those living in drier areas, near the desert, have five seasons. Greener areas have seven seasons. We know which season it is from observing trees, flowers and animal behavior. This helps us learn when the dry or rainy season is coming, so the community knows how to best plant crops. We are now working with meteorologists from the state to combine traditional and scientific knowledge. We found the sciences alone can sometimes be limited because they only consider physical aspects, like clouds, but at the community level we observe physical and ecological indicators.

This practical work and expertise guides us to make policy change at the national level. When Chad was designing it’s Intentionally Nationally Determined Contributions — plans that governments around the world have to cut greenhouse gas emissions — we had a gathering where we brought people from the community and we invited the minister of environment from Chad. We told them your NDCs are not responding to the needs of the community. And we were able to include traditional knowledge in Chad’s final agenda, as well as a human rights based approach — which only around two dozen of the NDCs from 196 countries mention.

My proudest accomplishment on the national level is my work during the 2015 climate-change meetings in Paris. I was designated co-chair of the International Indigenous Peoples Forum on Climate Change, which was established in 2008 as the caucus for indigenous people participating in the UN Climate Change. I negotiated and lobbied heads of government, the private sector and civil society. We were able to get indigenous people to come together and build a solution.

The next big goal is taking action to limit the global temperature increase to 1.5 degrees celsius, the goal of the 2015 Paris climate agreement.

— As told to Sanya Mansoor. This interview has been edited and condensed for clarity. 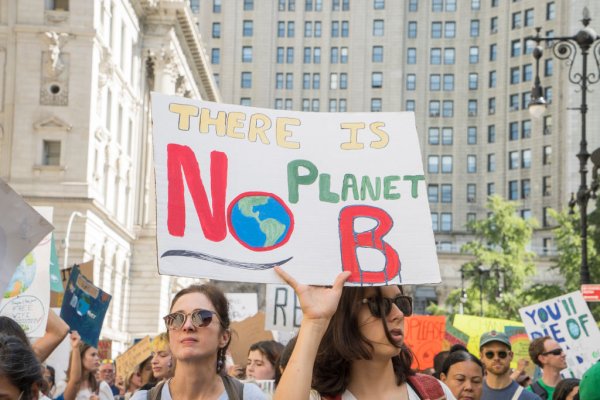 Litigation is a Powerful Tool for Holding Those Responsible for the Climate Crisis to Account
Next Up: Editor's Pick