A Top Defector Says the U.S. Must Levy Tougher Sanctions on North Korea to Prevent a New Nuclear State

The U.S. needs to wake up to the reality that its policy on North Korea is not working and quickly impose harsher sanctions if the world is going to avert the birth of a new nuclear state, a former North Korean diplomat says.

Thae Yong-ho, one of the highest-level North Korean officials to defect, told TIME in a recent interview that regime leader Kim Jong Un has no intention of abandoning his nuclear program and is only “trying to buy time” until the world accepts his country’s nuclear status.

Convincing Pyongyang to abandon its nuclear arsenal, Thae says, will require ramping up the pressure through punitive measures.

“Kim Jong Un is not interested in the denuclearization process,” he says, adding that “America has to take very resolute action by increasing additional economic sanctions.”

According to Thae, who served as the North’s former deputy ambassador to the U.K., President Donald Trump’s current approach of buddying up to the dictator and holding high-profile summits “is a failure.”

Thae’s comments come as Washington and Pyongyang both signal interest in resuming the stalled denuclearization talks. North Korea announced its willingness to reenter the discussions earlier this month in a statement that preceded its latest round of short-range missiles launches by just hours.

The last Trump-Kim summit in February collapsed over U.S. demands for denuclearization and North Korean demands for substantial sanctions relief.

While Trump has agreed to ease joint military exercises with South Korea, he has not relieved Pyongyang of the embargoes meant to halt its nuclear and ballistic missile programs.

But Thae says that Trump’s refusal to exact a heavier toll on a regime that has made unprecedented gains in its nuclear program — Kim has conducted more missile and nuclear tests than his father Kim Jong Il and grandfather Kim Il Sung combined — is already a coup for the young leader. Directly undercutting his own cabinet, Trump in May rolled back additional measures imposed by the Treasury Department, a decision he announced via Twitter.

Some experts insist that progress toward denuclearization remains unlikely until Washington is prepared to ease its already tough sanctions regimen. South Korean President Moon Jae-in has advocated the U.S. take a more conciliatory approach, while in July Chinese President Xi Jinping reportedly urged Trump in July to “show flexibility” and ease sanctions in due course. A New York Times report in June indicated that the Trump Administration may consider a deal that involves partial relief for partial dismantling.

Duyeon Kim, an adjunct senior fellow with the Center for a New American Security, suggests sanctions don’t have to be imposed in an all-or-nothing approach.

“If and when serious negotiations are held, Washington should consider providing time-bound ad hoc sanctions exemptions in exchange for some denuclearization steps,” she says.

“This provides some incentives and relief for Pyongyang to get the ball rolling on denuclearization while allowing for sanctions to be ‘snapped back’ if North Korea doesn’t fulfill its end of the bargain,” Kim adds. “Otherwise, if sanctions are completely lifted, then they would be difficult, if not impossible, to re-impose them because China and Russia would not vote in favor.”

The extent to which sanctions offer effective leverage over North Korea remains debatable. The regime itself insisted just last month that it “will never barter the strategic security of the country for the sanctions relief.”

Some analysts say it’s not the level of sanctions that should be up for debate, but how to more effectively enforce the U.S. and U.N. bans in place now, some of which date back to 2006.

“We don’t know precisely how badly the sanctions are hurting the North Korean economy,” says Benjamin Katzeff Silberstein, a Templeton Fellow at the Foreign Policy Research Institute, adding, “but we do know that they are.”

According to a report from South Korea’s central bank, the North’s economy in 2018 contracted for the second consecutive year, shrinking the most since 1997, due to a combination of international sanctions and drought.

Thae says the U.N.’s ban on North Korean exports of oil, seafood and petroleum have particularly put a squeeze on the country’s economy, but not enough to destabilize the black market or really force Pyongyang’s hand.

“The question is whether the sanctions are enough to stop the nuclear process of North Korea,” he says. “Clearly, it is not enough.” 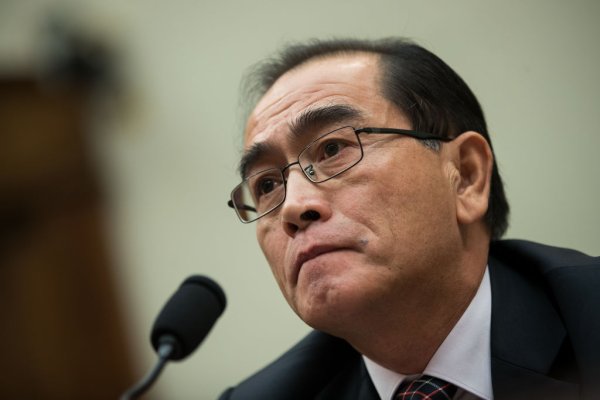 Why a North Korean Defector Says the Regime Will Soon End
Next Up: Editor's Pick