Boris Johnson’s Brexit Gamble Might Take the U.K. Back to Square One

Newly selected British Prime Minister Boris Johnson stormed into 10 Downing Street this past summer vowing to do the impossible: secure a better deal from Brussels than the one offered to his predecessor Theresa May. Johnson threatened to pull the U.K. out of the E.U. on Oct. 31 should that deal not materialize.

Two months later, Johnson’s impossible promise remains very challenging. Not only have the Europeans refused to reopen negotiations, but Johnson’s move to sidestep the British Parliament by suspending it for five weeks triggered parliamentary mutiny–Johnson and his Conservative Party lost their working majority in the House of Commons, and a cross-party alliance of MPs (including a number of high-profile Tories) banded together to pass legislation preventing Johnson from pulling the U.K. out of the E.U. absent a deal. Johnson then demanded a general election to secure himself a mandate to move forward with his do-or-die negotiations strategy with Brussels, but British parliamentarians refused that as well until Johnson obtained either an extension or a deal from Brussels.

Now Johnson has gone to the Continent in search of a deal and political salvation. The sticking point, as former Prime Minister May learned, is what happens between Northern Ireland (part of the U.K.) and the Republic of Ireland (part of the E.U.). The Good Friday Agreement that helped end much of the sectarian violence in Northern Ireland did away with any hard border between the two sides, which worked fine so long as both remained part of the E.U. Once the U.K. opted to leave the E.U., Brussels insisted that Northern Ireland remain part of the European customs union as a “backstop” until a system could be devised to keep the border open while protecting the integrity of the E.U. marketplace.

This was a nonstarter for May and, more important, for the Democratic Unionist Party (DUP), which was propping up her government. For them, none of the constituent elements of the U.K. (England, Wales, Scotland and Northern Ireland) could be subject to a different customs framework from the rest of the kingdom, lest it jeopardize the unity of the country. In the only real significant concession Brussels made to the British, it allowed the backstop to apply to the whole of the U.K. rather than just Northern Ireland until alternative arrangements could be found. Hard-line Brexiteers (Johnson among them) didn’t consider this a concession at all and demanded that the backstop be scrapped entirely. Europeans refused to budge and told Johnson to come up with a workable alternative. They’re still waiting.

Staring political realities in the face, Johnson knows he cannot accept May’s deal after campaigning to replace it with a better one, and he cannot leave the E.U. without a deal because of the British Parliament. Talks with European leaders have been cordial but not particularly productive. At the end of the day, his best bet may indeed be accepting a tweaked version of May’s deal with a Northern Ireland–only backstop–which the E.U. is likely to grant, since that was its proposal in the first place–and putting it to a vote in the Commons. Since Johnson has lost the working majority anyway, appeasing the DUP is no longer an issue, and plenty of parliamentarians–maybe even a majority of them–could vote for the deal as the least bad option available and finally put an end to the Brexit drama. Then the Brits can hold an election and fight about Brexit at the ballot box–at that point, they’ll be the only ones who still care. 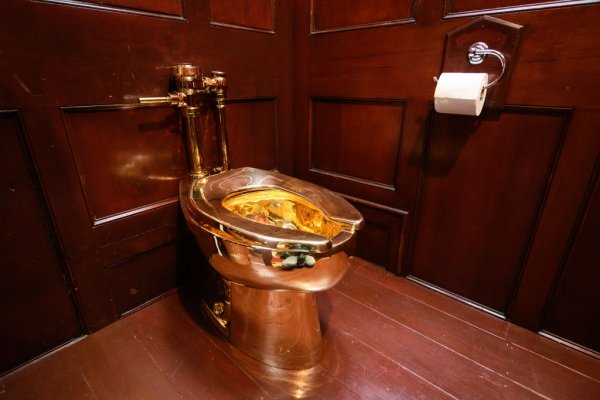 Golden Toilet Stolen From the U.K.'s Blenheim Palace
Next Up: Editor's Pick