An Electrical pylon and wind turbines operate in Corralejo on May 8, 2019 in Fuerteventura, Spain.
Vittorio Zunino Celotto—Getty Images
By John Brooke , Michael Bevis and Steve Rissing

There is no longer any debate that global warming is real, and that it is happening now at an alarming rate. It is transforming the global climate system before our eyes. The rise of fossil-fueled economies over the past 200 years, and especially the accelerating CO2 emissions since the end of World War II, is clearly the cause of our mounting climate crisis. But even though 99% of climate scientists recognize what is happening, it can still be difficult to grasp something of such magnitude.

“Climate change” inherently involves a historical perspective. As world leaders convene on Monday for the 2019 Climate Action Summit, we need to set recent change against the record of history, both human and geological. We need to think about what physicists call “rate” and “state.” Doing so—taking a deep historical view on an issue that can seem like a contemporary problem—helps us understand the scope and scale of our problem, while also offering hope that it is not too late to mitigate this crisis.

Worse, the rate of climate change now vastly exceeds anything observed in the last ten thousand years. Since roughly 1850, atmospheric CO2, the dominant greenhouse gas, has grown at an explosive rate, close to what mathematicians call “exponential.” Human population, GDP and fossil fuel emissions accelerated simultaneously in a similar manner.

Let us consider our atmosphere and climate in deep time. The volume of CO2 in the atmosphere stood at 315 parts per million (ppm) when first measured at Mauna Loa Observatory in 1958. That concentration has risen steadily since then. This year it reached 410 ppm. What does this 30% increase mean?

We live enshrouded by an atmospheric greenhouse of gases and water vapor that has maintained life-supporting conditions for hundreds of millions of years; CO2 is part of that mix. But over the past three million years our greenhouse system has been highly unstable. The record of CO2 trapped in polar ice reveals that over the last 800,000 years, during dramatic swings between ice ages and warm periods, CO2 has oscillated between 180 and 280 ppm. In the last rapid warm-up from the most recent glacial period, CO2 jumped to 260 ppm, and then oscillated around 275 ppm. Since then, for about 9,000 years, our climate has been relatively stable. Agriculture, civilizations and states emerged, and global population grew from several million at the end of the last Ice Age to 1.2 billion in 1850.

Since 1850, industrial emissions have driven atmospheric CO2 levels from about 280 to 410. Human populations are now surging toward eight billion. A doubling of CO2 from preindustrial levels, which is projected by 2075 — due to the combination of industrial emissions and huge volumes of ancient greenhouse gases rising from melting permafrost – will put the earth at CO2 levels not seen for 35 million years, the last time that Antarctica was ice-free. A quadrupling of CO2 would put us into the extreme hothouse conditions of the Jurassic era.

Because CO2 traps heat, our industrial emissions of greenhouse gases have launched a sudden and rapid shift in global temperature and climate. For over a century we have unconsciously been playing with the delicate controls of our planet’s unstable climate system. We did not understand what we were doing until recently, but we do now.

Fortunately carbon in the atmosphere isn’t the only thing that can grow exponentially. Technological rates of change provide a ray of hope. Fossil-fueled economies emerged in a geological instant—the past two hundred years—but over the last decade, renewable energy systems have developed even more explosively. With strong governmental action supported by a broad popular consensus, we might yet find a way through.

We need to act just as “exponentially” to reset these global controls and to accelerate through a new global energy transition.

The means are at hand. Solar and wind renewable technologies are surging in the market place. Driven by technological advances and economies of scale, renewable energy is already a prudent financial investment. Coal power generation persists thanks to national subsidies; across the United States, investment in coal is stalled and collapsing. Widespread gas leaks undermine the possible benefits of natural gas as a “transition fuel.” Indeed, power generation by natural gas may be at what some analysts see as a tipping point toward unprofitability.

Over just the last decade alternative energy markets have moved well into the exponential transition phase. The current transition to renewable energy systems creates massive employment opportunities just as past energy transitions have over the last two centuries. As in the past, and as described by researcher Carlota Perez, this transition faces a profound political struggle with entrenched, fossil fuel interests.

We cannot promise a panacea. There is no hope that we can suddenly and magically return to our era’s old norms of climate and atmosphere. The effects of residual enhanced CO2 will take centuries to work out under the best of scenarios. But our planet’s relationship to carbon dioxide has changed drastically before; it can change again. There is hope that we can avert a fundamental civilizational crisis—but only if we take immediate and “exponential” action.

The original chart that accompanied this story misstated the multiplier for the Gross Domestic Product line. The chart shows GDP in $10 billions, not $100 millions. 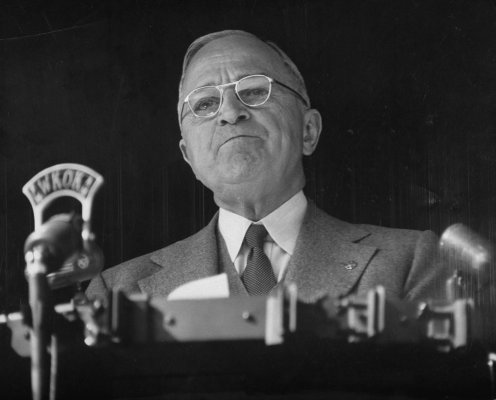 The History of Citizenship Day Is a Reminder That Being an American Has Always Been Complicated
Next Up: Editor's Pick