'Trump Is Having His Own Brexit': The Race to Prepare for a Potential U.S. Exit From the World's Mail System

Illustration by Joe Magee for TIME
By Abigail Abrams

As an American, Jeanne Glenz prizes her right to vote. But, because she lives near Munich with her German husband, exercising that right isn’t always easy.

This year, it could get even harder, depending on the results of an obscure international meeting scheduled to take place in Geneva on Sept. 24-25. If the Trump Administration doesn’t get what it wants at that summit, the United States is set to withdraw from an arcane treaty that governs global mail delivery—leaving commercial shippers and military mail managers fretting, and election officials concerned that millions of overseas Americans will struggle to cast a vote.

“This represents taxation without representation,” says Glenz, a 79-year-old retired psychologist from California.

The White House says it is working “around the clock” to facilitate a smooth exit from the agreement if it comes to that, but the U.S. Postal Service (USPS) has telegraphed a more cautious outlook in industry conversations. With few details made public, experts in everything from elections to trade worry the U.S. may be about to upset the stability of the mail system around the world.

The current system isn’t perfect—a letter may get lost; a gift may arrive the day after a birthday—but it’s still an impressive bit of international cooperation. After all, if you want to send a letter from the U.S. to Glenz in Germany, you can use American stamps and still expect Deutsche Post to deliver it.

That’s thanks to the Universal Postal Union (UPU), a 144-year-old organization that sets technical and security standards to keep international mail and small packages moving around the globe. Now part of the U.N., it’s the second oldest ­international organization in the world, and not typically ­involved in high-profile disputes. But one main part of the arrangement has drawn President Donald Trump’s ire: “terminal dues,” the rates the 192 member countries pay one another to deliver mail across borders. Because the fees were developed in the 1960s based on factors including a nation’s economic development at that point, countries like China, whose economy has grown enormously since then, still pay heavily subsidized rates while the U.S. pays much more. That means it can sometimes be cheaper to send a package from China to the United States than it is for Americans to send packages between states.

“What’s really made this a disastrous system is that in the last 10 years or so, international document volume has plummeted and international e-commerce has boomed,” says James Campbell, a lawyer and UPU expert who consults for international shipping companies. “The United States and the Europeans have been flooded with e-commerce goods that come from China and other countries. We are delivering those goods at terminal dues rates that are substantially less than what the Postal Service charges domestic mailers for the same service.”

This discounted shipping cost industrialized nations $2.1 billion in 2014, per a study cited by the USPS. Trump, who has long complained about trade imbalances and NATO spending, called this discrepancy “discriminatory” in the presidential memorandum he issued before announcing last October that he intended to leave the UPU. Though his was not a new complaint—administrations going back to Ronald Reagan’s have voiced it, and many trade experts agree the treaty’s rates need an update—the decision to quit the group outright was, like many Trump Administration actions, a surprise. But the withdrawal process takes a year, and the State Department says the U.S. will stay put if allowed to “self-declare” its own terminal-dues rates.

Which means the clock is ticking: the ­September UPU meeting is the last real chance to strike a deal. There, members will consider several proposals. Option A offers few changes. Option B lets countries ­decide rates, up to the amount they charge for domestic mail, starting in 2020. ­Option C would allow them to move ­toward setting their own rates, but at set ceiling ­increases until 2025. The proposals aren’t public, but documents seen by TIME show the U.S. proposed an amendment to Option C that would let it self-declare in 2020 while leaving other nations with a longer transition. (Other countries have proposed a variety of other amendments, too.)

U.S. officials say other member states appear to be listening, but its ­patience is limited. “We are doing every­thing possible to make sure one of two things happen: either we get a vote at the [meeting] that gives us immediate self-declared rates,” top White House trade adviser Peter Navarro tells TIME, “or we seamlessly exit the UPU.”

Those in the mailing industry aren’t optimistic about the seamless part.

“It looks like Trump is having his own Brexit,” says David Jinks, head of consumer research at the U.K.-based courier company Parcel­Hero. “It could be an absolute free-for-all, and every country will have to fight its corner and set its own rates.”

For now, there’s widespread disagreement about what will happen if the U.S. does withdraw on Oct. 17 without new bilateral postal agreements to replace the relationships the UPU now covers. And until those agreements are made public, businesses and election officials are stuck trying to plan for contingencies. Major trade partners are unlikely to refuse to deliver American mail, but a spokesperson for the European Commission—noting that it remains “committed to a multilateral rules-based approach”—said withdrawal from the UPU could have a “significant impact” on the customs treatment of mail from the U.S. bound for the European Union. There might be less incentive for foreign postal services to prioritize U.S. mail, or mere confusion could leave letters languishing in foreign post offices.

And while every person who enjoys getting a postcard from a friend who wishes you were here is potentially affected by the way mail moves around the globe, the stakes are particularly high for some.

Major business groups, including the U.S. Chamber of Commerce, are eager for the dues reform the Trump Administration is pushing, but many are wary of the upheaval of fully withdrawing from the union. Kate Muth, executive director of the International Mailers Advisory Group (IMAG), which has members that include outbound shippers, marketers and bulk mail consolidators, notes that the break would take place at peak shipping season ahead of the holidays, potentially leaving U.S. exporters without access to expedited customs processes. IMAG members are also concerned that a U.S. exit will encourage other countries to change their rates too, causing shipping costs to change unpredictably.

For U.S. troops serving overseas, mail is handled by the Military Postal Service Agency, so it should be largely unaffected by UPU changes—but military mail managers have been worried as they prepare for a withdrawal, according to Merry Law, an international mail expert who serves on the Universal Postal Union addressing work group. And even if military mail functions just fine, millions of other Americans live abroad, including civilians, military family members and military contractors who don’t have access to bases.

That population includes an estimated three million potential overseas voters, and election officials are unsure what to tell them as Election Day approaches.

Federal law guarantees them the right to vote absentee, but 19 states do not allow for electronic submission of ballots. Even for those that do allow an electronic method, ballot security is a major concern. Elections experts worry that, without access to the Universal Postal Union, overseas voters might not know if their ballots make it back on time or could be left paying high prices for private carriers to deliver their ballots—especially in state and local races, which aren’t covered by the guarantee that the federal government will cover postage for their ballots. “That’s tantamount to a poll tax,” said a Democratic aide to the House Administration Committee, which has been looking into mitigating fallout from a withdrawal.

“This would suddenly undermine a federal law, undermine the voting process, and take away options that overseas voters want and need,” says Susan Dzieduszycka-Suinat, president of the U.S. Vote Foundation, a non-partisan organization that helps overseas voters cast their ballots. “It would be a knife in the heart of overseas voting.”

There won’t be much time to iron out the kinks, with 2020 primaries just months away and several states holding important elections this November. Ballots are usually sent to overseas and military voters 45 days before Election Day. This year, that’s Sept. 21—three days before the UPU meeting in Switzerland.

“It’s uncertain what’s actually going to happen until ballots are already in the hands of the voters,” Keith Ingram, director of elections in Texas and president of the National Association of State Election Directors, told TIME. Overseas voters already have fairly low turnout, he added, “and uncertainty is something that has the potential for decreasing turnout.”

The White House and State Department declined to answer specific questions on how military and election mail would be handled in the event of withdrawal, but Navarro said that there would be no “interruption” for overseas voters or troops, and that there would be “no additional cost” for overseas voters in the event of an exit. Preparations for a future outside the UPU started the day after Trump announced his intention last fall, Navarro said, and the White House has since held regular “high level” meetings with relevant agencies. “Two of the highest priority issues we are addressing have to do with these elections and mail involving our military troops,” Navarro said. “We will not let there be any interruption in either one of those groups.” The Postal Service also declined to answer detailed questions about its preparations but said it was taking “parallel efforts to ensure the continued exchange of international mail items even if the negotiations to remain in the UPU are unsuccessful.”

Yet despite the confidence projected by the Trump Administration, the Postal Service warned the mailing industry in a June presentation in Washington that it would likely see changes to its “geographic coverage” if the U.S. pulled out, according to presentation materials and recordings obtained by TIME. The USPS and the Federal Voting ­Assistance Program, the Defense Department office that helps manage overseas voting, also told election officials at a conference in August that the U.S. was focused on establishing agreements to ensure that mail delivery ­continues with 17 priority nations, ­according to Tammy Patrick, a senior adviser at the ­Democracy Fund who serves as the USPS ­liaison for the ­National Association of ­Election Officials.

Those countries are expected to cover about 70% of Americans abroad. That means more than 1 in 4 U.S. citizens living overseas could be in a country with no agreement facilitating mail between them and the U.S.

So far, as the Trump Administration prepares for the meeting in Geneva, all the major agencies involved appear to be sticking with the President’s signature confident style and quick decision-making. The State Department said it is “ready and eager to constructively engage with other reform-­minded partners” at the summit, but emphasized the U.S. would achieve its goal of setting its own rates “whatever the outcome” of the meeting. The United States under Trump doesn’t have the same relationships it once did with other countries, but if the Americans can convince a majority of the other countries attending the Universal Postal Union’s meeting that they don’t want the U.S. to leave the group, then some of these concerns might not come to pass this year.

In either case, the once quiet world of international mail may be quiet no longer.

“It’s definitely going to have an impact,” Patrick says of the potential withdrawal. “It’s just a question of how detrimental it’s going to be.”

For Glenz, the uncertainty has made her more eager than ever to get her ballot in the mail. “The ability to vote is the cornerstone of a democracy,” she says from Germany. “This is my one tiny golden hammer, and I’m not giving it up.” —With reporting by ­Madeline Roache/London 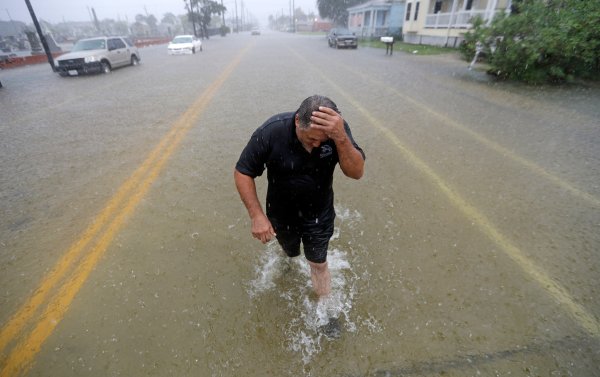 5 Dead in Texas Floods
Next Up: Editor's Pick