Within seconds, however, things take a dark turn as students continue listing their new supplies. In the background, a teacher is seen to secure a classroom door; students run for cover in a library while a shooting breaks out in the background.

New sneakers are suddenly perfect for running away from a gunman, a child explains. A new jacket — “a real must have”— becomes a tool for barricading a door from a shooter, another says. A third student uses the skateboard his parents got for him to break a window in his classroom he can flee through.

The list continues. Scissors are a tool for defense; new socks are used as tourniquets. Finally, a girl huddled in a bathroom, feet up on the toilet so no one can detect her, texts her mother, “I love you,” on a brand new cellphone and pink sequin phone cover.

“I finally got my own phone to stay in touch with my mom,” she says through tears. The video ends as the bathroom door opens and footsteps, presumably the gunman’s, approach.

Developed by Sandy Hook Promise, a group that formed in the aftermath of the mass shooting at Sandy Hook Elementary School in December 2012 that aims to protect children from gun violence, the video is the organization’s new public-service-announcement. It was made as part of the group’s “Know the Signs” campaign, which urges people to recognize the warning signs and threats that can often precede school shootings and other acts of violence. The video premiered on the Today Show on Wednesday morning.

The PSA is purposefully grim, designed to spark conversations about prioritizing the prevention of violent acts in school and aims to promote a more hands-on approach to ending violence, said Mark Barden, a co-founder and managing director of Sandy Hook Promise whose son, Daniel, died in the 2012 shooting.

“In our video, we show the awful, painful reality that children across the country face as school shootings become more frequent,” Barden said in a statement. “But we also make it clear that it doesn’t have to be this way: When we teach students to Know the Signs, and empower them to report warning signs to trusted adults, we can prevent school shootings and save lives.”

Sandy Hook Promise has previously released other impactful PSAs. Last year, the group released a video that showed a shooting from the gunman’s point of view. 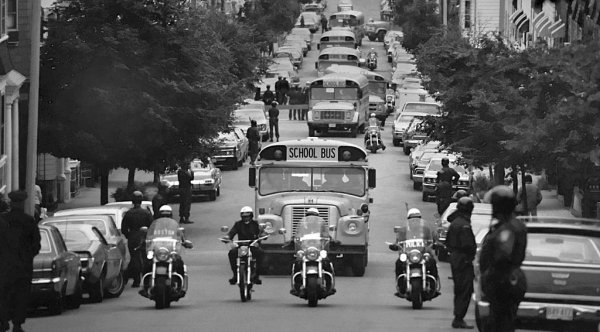 Busing Ended 20 Years Ago. Today Our Schools Are Segregated Once Again
Next Up: Editor's Pick