Two women got engaged on the season finale of Bachelor in Paradise — a spinoff of The Bachelor — making history as the first same-sex couple in the American reality TV franchise.

One of three engagements that played out in the finale, but without a question the most significant, Demi Burnett proposed to her Kristian Haggerty on a beach in Mexico where the show is filmed. “There were a lot of things that came between us, mostly myself and my own struggles,” Burnett said. “Like you said, I came here to find myself. But I found myself in you.”

Haggerty then proposed to Burnett in a televised Bachelor in Paradise after-show. “I wouldn’t want to do this life with anyone but you,” she said, according to The Hollywood Reporter.

The engagement capped off a Bachelor in Paradise season that has been praised for its handling of a same-sex storyline in a show where, historically, the couples have all been straight. GLAAD Head of Talent Anthony Ramos said in a statement in August that the show’s including Burnett’s coming out story and her journey toward accepting her queer identity has been “groundbreaking for the series.”

“Tens of millions of people around the world watch The Bachelor and The Bachelorette franchises and this move to include a same-sex relationship in an honest fashion has the power to upend preconceived notions of LGBTQ people like Demi who are attracted to more than one gender,” Ramos said.

Burnett and Haggerty’s journey to finding love was not entirely captured by the cameras. Burnett, who was a breakout character on the 23rd season of The Bachelor, which aired earlier this year, came back to the franchise for a stint in Paradise. During the season, she at first pursued a relationship with a male contestant, Derek Peth, but later confessed in a one-on-one interview that she still had feelings for Haggerty — the two had dated before Bachelor in Paradise taped.

The show ended up flying out Haggerty (who had not previously appeared on The Bachelor) and she surprised Burnett in an Aug. 20 episode. Over the course of the remainder of the show, Burnett was able to explore and further accept her sexuality, and she came out as sexually fluid.

“I’ve learned that it’s okay to be myself and embrace that and own it,” Burnett told People in an interview. “I want to be honest and open. Love is love.” 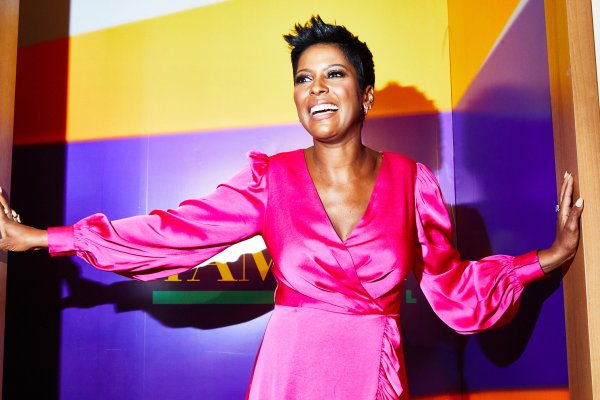 "I Wanted to Bet on Myself." Tamron Hall Lost One of TV's Best Gigs. Now She's Doing Things Her Way
Next Up: Editor's Pick