"I Wanted to Bet on Myself." Tamron Hall Lost One of TV's Best Gigs. Now She's Doing Things Her Way

Tamron Hall suggests we meet at a gym, Women’s World of Boxing, which sits opposite a historic stretch of Harlem, known as Strivers’ Row. LL Cool J’s “Mama Said Knock You Out” is playing as she laces up her boxing shoes. “Don’t call it a comeback,” he raps. “I’ve been here for years/ I’m rocking my peers/ Puttin’ suckers in fear.” Even the great Sugar Ray Robinson would have had trouble avoiding the barrage of loaded metaphors coming at me about Hall’s life.

Hall, 49, is—she makes abundantly clear—not picking herself up off the mat after abruptly departing NBC in February 2017 when her slot cohosting the third hour of the Today show was given to Megyn Kelly. She has been upright and dancing since then. But she has had a tough few rounds. First, leaving the network also meant leaving her daily MSNBC show, NewsNation. She kept her Deadline: Crime gig on Investigation Discovery, but for a woman who has had a job since she was 14, it felt like underemployment.

Then the kinds of offers she got seemed to exhibit no understanding of her skill set or experience. She was, after all, the first black female host of Today. “Nothing is more satisfying than being in a room full of men the same age telling you what women want to watch,” she says dryly. When she finally found the perfect TV partner, someone who championed her talent, who made sure she got the right meetings, it was Harvey Weinstein. Within months, he’d been accused of multiple predatory and possibly criminal behaviors, and though he denied them all, it was clear to her that they would not be working together. “He called to apologize,” she says. “And I said, ‘Don’t apologize to me. Apologize to your children.’”

But this September, two and a half years after walking out of the NBC headquarters at Rockefeller Plaza, Hall is back on the air as host of the syndicated Tamron Hall show. She has found a simpatico business partner in Disney and coaxed an old daytime veteran, Bill Geddie—who co-created The View and was pretty much Barbara Walters’ right-hand man—out of retirement. She won him over, she says, with her encyclopedic knowledge of vintage daytime TV, which gives a hint of the broad old-school appeal she’s hoping her show will have.

Hall says she wants to talk to people in all stages of life, not just when they’re very famous or trending on Twitter because of some controversy. She’s most interested in what people have in common. “I tell people, if I peel off my mask, you peel off yours, we can have a conversation,” she says. “If you have these well-rounded layered conversations where the masks are off, well, then you’ve got yourself a talk show.” This approach means her show won’t have to rely on celebrities and news­makers that rookie programs often have a tough time booking, especially since hers is not the only shiny new kid on the block. Kelly Clarkson has a daytime show, as does self-help author Mel Robbins.

Launching a syndicated show requires a lot of meetings with local affiliates, and Hall has been on the road for months. She wants the show to be diverse, but not necessarily in the way that is often meant. Having been born and raised in rural Texas, she’s aiming to wean the media off what she sees as its largely Northeasterly diet, to be a voice for a different part of America. “When I say diversity, it’s not race,” she says. “It’s geography. It’s where you’re from: big town, small town, South, East. I was in Little Rock, Ark., and this Southern white woman—it was amazing, literally like out of central casting—turns and goes, ‘Tamron, I miss you, girl. Get on back out there!’”

But race is a factor too. Early on in her promotional tour, a female executive in a big city she won’t name told her that she didn’t think white women in her market would watch a black host. Hall was shocked. “Parenthood doesn’t have a race,” she says. “Falling in love, wanting to be in love, learning something new, being inspired. Tell me a woman—black, white, Latino, Asian—that can listen to Aretha Franklin sing ‘Natural Woman’ and not be touched.” Her charm offensive must have worked: the show has been sold in 95% of local markets. Her early ratings have been encouraging, but the hard part is not over. There’s plenty to like about Anderson Cooper, Harry Connick Jr. and Katie Couric too, and they all had failures in this genre.

During her hiatus, Hall got a lot of personal business out of the way. She married an old friend, music-industry executive Steve Greener, whom she says she suddenly saw in a new light. In April, she had a baby, Moses, whose gestation she kept a secret with the aid of one oft-worn pink jumpsuit, until the month before his birth. During our two-hour interview, Hall mentions no fewer than three times that she had to give up breastfeeding. It’s amazing, she says, how many people say they’re breastfeeding exclusively, and turn out to be supplementing with formula. It’s clear she’s aware people are going to have opinions about her mothering choices.

Did taking her foot off the gas career-wise mean all these other parts fell into place? I ask over lunch at a Senegalese place in Harlem. After all, she had been engaged a few times before. “I was able to be more vulnerable, and maybe that’s what it was,” she says. “I had worked so hard that I did not allow myself to be vulnerable. I had to fight. You’re armoring up to go into the studio, you’re armoring up to be the best reporter, you’re armoring up to interview this family who just lost everything.”

Hall relies on warlike metaphors for a reason. Her mother was 19 when she had Hall in Luling, Texas. Her mother’s father, whom Hall shared a home with and adored, had a second-grade education. “When you are poor and you are lonely and you are black, there’s no such thing as too much invested in your career,” she says. “I never had a conversation with my mother or my grandfather or my dad that included, ‘Don’t work too hard.’”

Her success has allowed her to take care of many in her family financially, so when she found out via text three minutes before she went on the air for NewsNation that she was being relieved of her role on the Today show but would be given other duties, she had others to think about before she walked. To some in the industry, it is still an open question as to whether she made the right choice. Kelly, famously, did not last at Today, and perhaps Hall could have gotten the slot back, as her cohost Al Roker did, if she had just waited it out. But she has no regrets. “I didn’t want to play out all of the scenarios. I wanted to bet on myself. I knew that the contract that I had gave me some cushion. It wasn’t $69 million,” she says, referring to Kelly’s reported salary, “but listen, it was a nice cushion.”

At the time of her departure, she says, she was taking advice only from her mother and God, so I ask her about the verse in Romans that says all things work together for the good of God and those who love him. And that’s when she starts crying. “These are tears of joy,” she says. “It’s just to see the awesomeness of life is wonderful, and that’s why I’m excited about the show and I’m excited to have people come on and tell their story and their journey.” At the morning’s boxing lesson, her trainer kept reminding her that ducking and weaving is just as important as throwing a punch. Sometimes fighters have to just stay on their feet and the opportunities for a knockout will come to them. 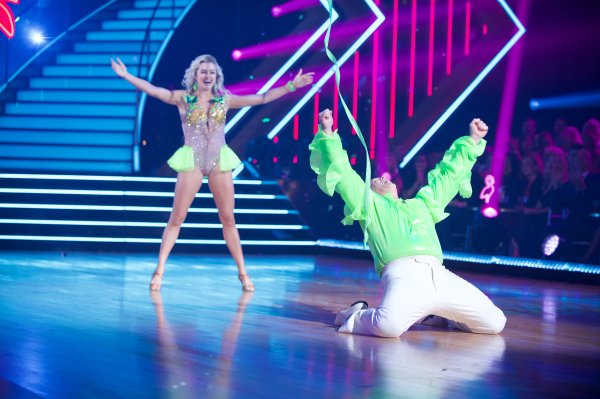 Sean Spicer Was an Extremely Good Sport on Dancing With the Stars. That's Exactly the Problem
Next Up: Editor's Pick