'One Woman, and Millions of People to Back Her Up.' How Elizabeth Warren Made Fighting Corruption A Feminist Rallying Cry

If winning the Democratic nomination requires wooing the party’s progressive wing and harnessing the power of activist women, then Senator Elizabeth Warren has a plan for that.

At a rally in New York City’s Washington Square Park on Monday evening, just hours after she beat Senator Bernie Sanders for the coveted endorsement of the Working Families Party, Warren laid out a far-reaching anti-corruption plan that rooted her campaign in a long history of women reformers.

But the speech also served as a road map for her path to the nomination, positioning Warren as the only candidate in the race who can knit together the women voters and progressive activists who propelled the Democrats to midterm victories in 2018.

Standing before a huge crowd just steps from the Triangle Shirtwaist Factory building, Warren outlined a plan to curb the influence of corporate money in Washington. She proposed a lifetime ban on lobbying for ex-Presidents, Senators and Members of Congress; a ban on hiring corporate lobbyists on federal government staff; a ban on lobbying on behalf of foreign governments; a ban on corporate lobbyists “bundling” campaign donations; a ban on secret meetings between public officials and lobbyists; a ban on elected officials owning businesses or trading individual stocks.

“Enough is enough,” Warren said. “We will take down the ‘for sale’ signs hanging outside of every federal building in Washington.”

It came as no surprise that Warren, who has been railing against corruption since her time as a Harvard Law School professor, seized on the theme. But if the policy was familiar, the narrative was new. Warren used the speech to situate her campaign in a long history of women reformers and labor organizers who have taken on big corporate interests and won.

The location of the speech was symbolic. The Triangle Shirtwaist Factory fire—in which 146 garment workers, most of them immigrant women, burned to death in 1911—would become a turning point in both the women’s and labor movements, accelerating women’s suffrage and leading to labor reforms that protected workers. It was also, as Warren pointed out in her speech, a wake-up call for young Frances Perkins, who witnessed the fire and became a crusader for worker’s rights before becoming the first woman to serve in a President’s cabinet, as Secretary of Labor to Franklin Delano Roosevelt.

“The tragic story of the Triangle factory fire is a story about power: A story of what happens when the rich and the powerful take control of government and use it to increase their own profits while they stick it to working people,” Warren said. “But what happened in the aftermath of the fire is a different story about power—our power, about what’s possible when we all fight together as one.”

The speech doubled as a way for Warren distinguish herself from Sanders, who is similarly fighting for the progressive mantle. Supporters said they were excited to see a woman inject identity issues into an economic critique.

“[Sanders] boiled everything down to economic oppression, but there are other issues,” says Amber Sexton, 50, a bartender who voted for Sanders in 2016 but now supports Warren. “She has an optimism and a positivity. She’s not just against things; she’s for things.”

Not everyone was convinced. Elliot Crown, a Sanders supporter who showed up to Washington Square Park wearing a paper-mache mask of the Senator from Vermont, said he was wary of Warren’s pitch.

“I think she’s too ready to compromise,” he says. “At the end of the day, I think she’ll be just like any corporate Democrat.”

Merging the progressive critique of unchecked capitalism with the promise of the first woman president could be Warren’s path to victory in the primary. Sanders is “saying the same things as her, but from a man’s point of view,” says Adrian Bey, a 45-year old fashion designer who voted for Sanders in 2016. “You can get more flies with honey than with vinegar,” he says. “Not to say Bernie is vinegar, but she’s definitely honey.”

The speech also highlighted Warren’s theory of change. “While the women of the trade unions kept pushing from the outside, Frances pushed from the inside,” she said. “So, what did one woman—one very persistent woman—backed up by millions of people across this country get done?” she said. “Social Security. Unemployment insurance. Abolition of child labor. Minimum wage. The right to join a union. Even the very existence of the weekend. Big, structural change. One woman, and millions of people to back her up.”

Supporters say that this playbook—merging external activism with practical political maneuvering—makes Warren more likely to get things done. “That has been the Working Families Party theory of change,” says Nelini Stamp, the Director of Strategy and Partnership for the Working Families Party. “We’ve elected candidates to office and if they don’t do what our people have demanded, we hold them accountable. We’ve done the inside-outside game for a long time.”

On this night, even Warren’s podium was symbolic. It was built with wood salvaged from the Perkins homestead, crafted by a Warren grassroots donor who owns an all-woman woodworking company, and modeled after the soapboxes that organizers would speak from during the early labor movement. It was 46 inches tall, for the woman who wants to be the 46th President of the United States. 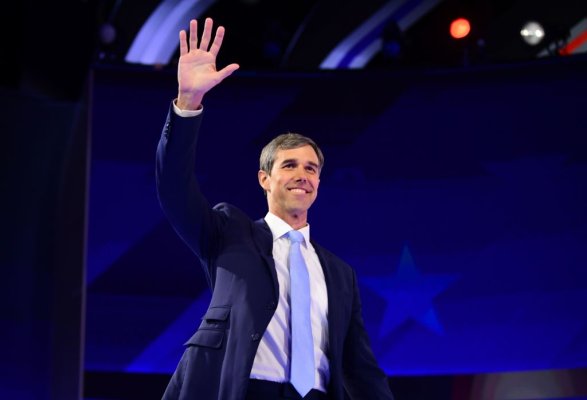 Texas Lawmaker to Beto O'Rourke: 'My AR Is Ready for You'
Next Up: Editor's Pick