An Alaska swimming official’s disqualification of a high school student athlete for wearing an allegedly revealing swimsuit has added fuel to the controversy over the policing of female athletes’ bodies. During a meet in Anchorage last Friday, the female official disqualified a 17-year-old Dimond High School student who had just won a 100-meter freestyle race on the grounds that the seat of her swimsuit was exposing too much of her behind.

A swimming coach who is a friend of the girl’s family tells TIME she believes that the girl stands out only because she is “fuller-figured.” Other people familiar with the girl tell TIME it is unlikely that she wore her suit in a manner that contravened attire rules intentionally; the swimmer’s mother told local news station KTUU that the official had previously also “critiqued” her younger sibling’s swimsuit.

The Anchorage School District announced Tuesday that it is overturning the disqualification and reinstating the team’s lost points. The district has also removed the official’s certification, and will suspend the swimsuit coverage rule moving forward.

Annette Rohde, who was volunteering as an official at Friday’s swim meet and is the mother of a girl on the Dimond High’s swim team, tells TIME that she found the official’s call to be “ridiculous.”

“You can’t make a call like that just because you don’t like the way the suit is sitting on their body,” Rohde says. A former gymnastics coach, Rohde says that she’s familiar with the way focusing on an athlete’s body can affect them. She describes the uniform rule as a “grey area” in the rulebook.

Although the swimsuit regulations are derived from guidelines written by the National Federation of State High School Associations, the way rules are enforced is determined by state-level sports association. The Federation’s uniform rules say that girls’ swimsuits should “cover the buttocks and breasts,” and presents a diagram that shows “appropriate and inappropriate” swimsuit coverage. (The Federation also issued a memorandum on swimsuits in August, which said that there was a “trend” of female swimmers wearing their suits inappropriately.)

However, some say that these rules are unclear, and that many female swimmers have at least part of their buttocks exposed. Swim team parents also argue it doesn’t make sense to penalize athletes (let alone inconsistently) when their uniforms shift as they are competing.

Joey Caterinichio, a national official for USA Swimming who also officiates for Anchorage high schools, says that Alaska School Activities Association implemented the uniform rule last year, and the disqualification policy was put in place this year. Caterinichio says that she’s been pressing the Alaska Association to eliminate the rule because it’s far too subjective, and puts an undue emphasis on students’ bodies. While she says that the she’s heard that the NFHS some girls hike their suits up in other states, she’s never seen this happen in Alaska, and the students should be given the benefit of the doubt.

“If children are in the same swimsuits, we’re no longer judging the swimsuit — we’re judging the body,” Caterinichio tells TIME.

Lauren Langford, an Anchorage swim coach who also knows the 17-year-old’s family, posted images of common swimsuit uniforms on Medium, showing that none of the suits could fully cover a swimmer’s buttocks.

“They’re not in compliance even before they get on the body of a swimmer. Some of these brands are currently being used as team suits. If lots of girls are wearing them, and they’re cut in a way that is ‘immodest,’ why has only one swimmer been disqualified?,” Langford wrote.

“We cannot allow our organization to become one that engages in body-shaming — it should promote a healthy body image for all athletes,” Langford continued.

In a statement, the school district noted that the swimsuits were purchased by the team, and that the swim program had “made deliberate efforts over the last year to ensure athletes’ uniforms meet the regulations.”

“The disqualified athlete was wearing the approved, school-issued suit during the race. In the first three meets this year, the Dimond swim team has had no disqualifications related to the wear of the swim uniform,” the district said.

School officials and witnesses say that the controversy over the fit of the girl’s swimsuit began a year ago, when a parent declared that the girl should adjust her swimsuit. “You girls need to cover up for the sake of my boys,” the parent said, according to witnesses.

A parent also took a photo of the girl on the swim deck and shared it around as evidence that her suit was inappropriate, according to the school district. The assistant principal stepped in and “indicated to the parent who took the photographs that it was not permissible for him to take pictures of others’ children and that he should stop immediately,” the school district said.

After the girl was disqualified in Friday, her coach immediately challenged the decision. The school district later announced that it had reviewed the decision, and decided that it was inappropriate.

“Following our review of the September 6 disqualification of a Dimond High School swimmer, to include interviews of multiple witnesses, the Anchorage School District has concluded that our swimmer was targeted based solely on how a standard, school-issued uniform happened to fit the shape of her body. We cannot tolerate discrimination of any kind, and certainly not based on body shape. This disqualification was heavy-handed and unnecessary,” the school district said in a statement. 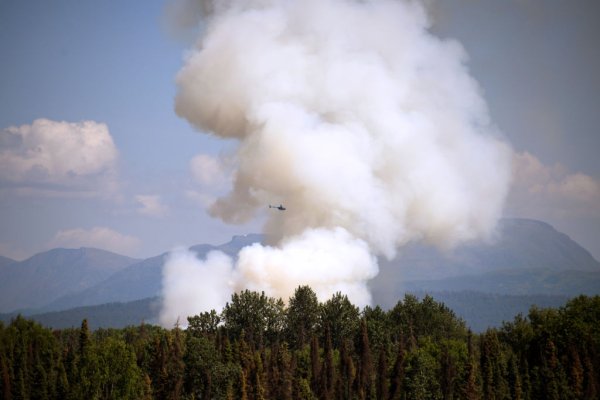 Alaska's Wildfire Seasons Are Getting Worse: Experts
Next Up: Editor's Pick