“Doughnuts” occur when a driver moves a car around in tight circles, causing round tire marks that look like the circular pastry the maneuver is named for. Richard J. McEwan, 26, is accused of driving around the Trump National Golf Course in Bedminster, N.J. and performing the maneuver on two occasions, according to a joint statement from the Somerset County prosecutor’s office and the Bedminster Township police department.

On Sept. 3, a golf course employee said he heard loud music and saw a Ford sedan driving around on top of the 11th hole. The estimated damage to the green there was about $10,000, according to the prosecutor’s office.

A second incident occurred on Sept. 8, with similar behavior reported on the green of the 13th hole of the golf course, causing between $7,000 and $9,000 of damage. A witness told police they saw a blue Ford compact car with a Rutgers sticker being driven by a young white male.

With the help of a partial license plate, detectives with both the prosecutor’s office and the Bedminster police determined the vehicle was a 2006 Ford Focus belonging to McEwan. He was arrested and charged on Sept. 10; police say a future court date is currently pending.

The Trump Organization did not immediately respond to a request for comment from TIME. In a statement to CNN, a spokesperson said McEwan “will be prosecuted to the full extent of the law.”

Earlier in September, McEwan was also arrested in Rhode Island after he allegedly broke into Taylor Swift’s beachfront home. The Associated Press, which has confirmed his reports he took off his shoes before entering Swift’s home because he wanted to be polite. McEwan was charged with breaking and entering and willful trespassing. 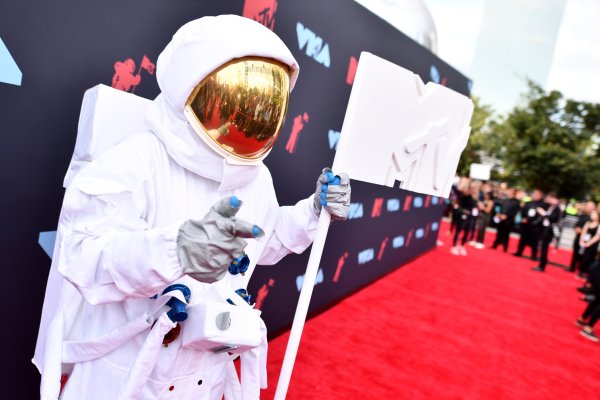 Several Arrested Outside MTV VMAs in Newark After Protests Over Lead in City's Water
Next Up: Editor's Pick