Some State GOP Parties Are Canceling Their Primaries. Here's Why It May Not Protect President Trump

Three states have canceled their Republican presidential primaries so far. That number is going to keep growing.

State GOP committees in Kansas, South Carolina and Nevada over the weekend announced that they’re bypassing the White House nominating process in 2020 and falling in line behind President Donald Trump’s re-election bid, effectively kneecapping three Trump challengers’ attempt to block his nomination. Arizona is expected to follow this week.

The long-shot bids from Trump’s challengers had little likelihood at denying him re-nomination, but the moves further lengthen the odds and show how fully Trump’s loyalists have taken over parties in the states.

“I’m running because I think we need to have a conversation about what it means to be a Republican,” Mark Sanford, a former congressman and Governor of South Carolina, told MSNBC’s Morning Joe on Monday. “The grassroots of what the party used to be about is still there.”

Maybe. But that’s not where the party leadership is at the moment. Those party leaders are firmly with the President, or at least not eager to pick fights with him. Last spring, some 43% of Republicans told the Pew Research Center that they are open to a primary challenger to Trump. His overall job approval rating, per Gallup, stands at 39%, although he is still a draw among conservatives. Even Trump’s detractors acknowledge his sway inside the GOP, especially in states where he installed hand-picked allies for state party chairs.

Which is why the likes of former Sen. Jeff Flake and Maryland Gov. Larry Hogan opted not to launch their own primaries against Trump. Instead, Trump’s threats come from the likes of Sanford, former Rep. Joe Walsh of Illinois and former Massachusetts Gov. Bill Weld. Collectively, Trump took to Twitter on Monday to brand his trio of challengers “The Three Stooges, all badly failed candidates.”

Asked about his primary challengers as he walked to a waiting Marine One on Monday, Trump responded he doesn’t know them, before giving very strong descriptions of his rivals’ weaknesses.

“I guess it’s a publicity stunt,” Trump said. “I’m not looking to give them any credibility. They have no credibility.”

Some inside the GOP blasted the state parties’ decision. Former tech exec Carly Fiorina and a primary opponent of Trump in 2016 tweeted Monday that “in this country, we pledge allegiance to the flag, not the President.”

Members of the Republican National Committee, which has become a de facto arm of the Trump political machine, insisted that they had applied no pressure on state parties and repeatedly stressed that this was a choice made in every state.

But here’s the thing about presidential nominees: they aren’t really picked democratically. National parties pick the nominees, and they can use whatever arcane rules they want.

Voters in primaries and caucus goers aren’t picking a nominee, either; they’re setting in motion a process — determined separately in every state and due to the RNC by Oct. 1 for approval — how to pick delegates to the parties’ nominating conventions. There, those delegates select a nominee under national party rules that, in functional parties, few voters ever really probe.

And canceling nominating primaries has precedent for Presidents seeking a second term. In 1992, Republicans canceled eight states’ primaries to make it easier for President George H.W. Bush’s re-nominating fight against conservative commentator Pat Buchanan. Democrats in eight states canceled primaries in 1996 to make Bill Clinton’s second term easier to find. In 2004, the GOP nixed 10 states’ contents to help George W. Bush, and Democrats in 2012 did away with 10 contests.

In all but 1992, the incumbent didn’t face a real challenge. Now? Maybe.

But perhaps the peril isn’t the nominating itself. Historically, incumbent Presidents who face primaries don’t go on to win second terms. The elder Bush was out after one term. Edward Kennedy’s primary against Jimmy Carter in 1980 resulted in a one-term presidency. Lyndon Johnson withdrew from the 1968 race — in which only 14 states and the District of Columbia had scheduled Democratic nominating contests at all — after almost losing New Hampshire to Eugene McCarthy.

In mounting such audacious challenges to a sitting President, these three Republicans may be setting the stage for a one-term Trump. 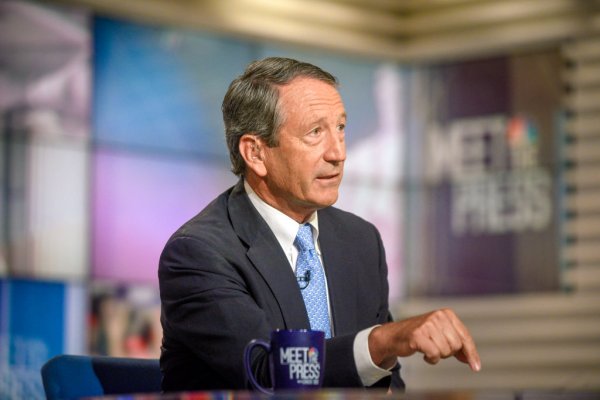 Sanford Launches Primary Challenge Against Trump
Next Up: Editor's Pick