The Thames Barrier in east London is seen fully closed during its annual full test closure. The barrier's gates rotate by 90 degrees into the fully closed defence position stopping the tide going upstream into London.
Dominic Lipinski—PA Images/Getty Images
Ideas
By Ban Ki-moon
Ban Ki-moon is former Secretary General of the United Nations and Deputy Chair of The Elders

Hundreds of millions of people are living with the effects of global warming – some now irreversible. For those on the frontlines of climate change, developing coping mechanisms is a matter of survival. And yet the world is not paying enough attention to the need to adapt to a warming planet alongside our efforts to reduce our carbon emissions. We urgently need more resources, more collaboration and more political will to make adaptation a global priority.

The good news is that adaptation, done well, is not only the right thing to do, it also makes economic sense. The Global Commission on Adaptation, which I co-founded about a year ago with Bill Gates and World Bank CEO Kristalina Georgieva, estimates that investing $1.8 trillion to improve climate resilience between now and 2030 in five critical areas — early-warning systems against cyclones and hurricanes, resilient infrastructure, better dryland agriculture, mangrove protection and water security — would yield up to $7.1 trillion in net benefits.

Today sees the launch of the organization’s flagship report into how mankind can adapt effectively to the impacts of climate change, and it is clear that the economic benefits of investing in resilient infrastructure — in sturdier bridges, stronger cyclone shelters and storm barriers – will far outweigh costs of reconstruction. By reducing risk, adaptation lowers financial and insurance costs and makes investment more appealing in places that would otherwise appear too precarious. London’s Canary Wharf and other real-estate developments in east London would not have been possible without the protection of the Thames Barrier, a series of movable steel cylindrical gates that have been operational since 1982. By holding back storm surges and high tides, the barrier helps protect 1.3 million people who live or work below the Thames’ average level of high tide as well as extensive property and infrastructure from flooding. No surprise then that New York and New Jersey are planning to build a storm barrier of their own.

The Thames Barrier holds another lesson for investors: a small additional outlay upfront to climate-proof infrastructure delivers higher returns for longer. In a recent study the World Bank estimated that making infrastructure more resilient adds about 3% to upfront costs but increases returns 300%.

Resourceful communities are already adapting to climate change with human ingenuity and solutions that range from green tech to biotech to high-tech. In 2017, Miami became the first city in the world to issue municipal bonds to finance climate adaptation at scale, and it could become a model for how governments finance investments in resilient infrastructure. Shanghai is greening districts with wetland areas, rooftop gardens, parks and permeable pavements to capture, slow down and filter storm water. For about 20 years, Bangladesh has been investing in early-warning systems in the event of natural disasters; in building shelters; and in implementing evacuation drills. In May, when Cyclone Fani hit, India and Bangladesh moved more than 2 million people out of harm’s way. And across the Sahel in Africa, a “Great Green Wall” is now visible from space as farmers coax trees back to life from rootstock. The knowledge and benefits of natural regeneration are being shared from farmer to farmer across African countries, and millions of acres have been reclaimed.

These are bright spots where adaptation has begun, but we need to do more of it, with more urgency and at scale. Let’s not compound our climate emergency with a failure of the imagination. 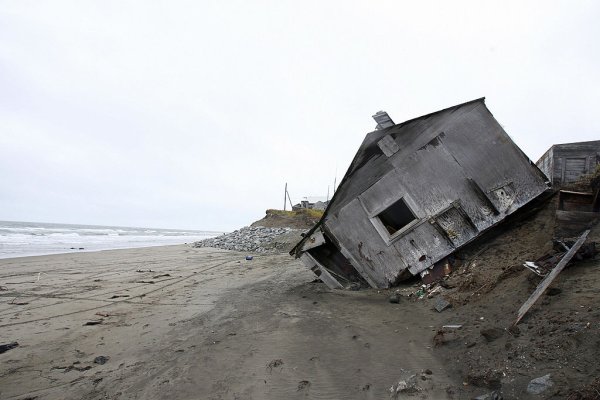 2020 Democrats Will Discuss Climate Change in Prime Time. But Voters Want More Than Talking
Next Up: Editor's Pick