Hong Kong’s impressive, massive peaceful protests include violent outbursts. The initial objection against the extradition bill to allow case-by-case renditions of alleged fugitive offenders from Hong Kong to other jurisdictions, including the Chinese mainland, has mutated into frequent, guerilla warfare on the streets of the city.

The Hong Kong police has the hardest day-to-day job in dealing with radical protesters, mostly youth, who have learnt to self-organize via social media to cause regular havoc here and there. Police officers are exhausted after three months of being in the front line absorbing public frustrations.

Political solutions have to come from the city’s politicians. The embattled chief executive, Carrie Lam, made the long-awaited move on Sept. 4 to meet the protesters’ key demand. Although she had already suspended the extradition bill in June, protesters want its formal withdrawal through its removal from the agenda of the legislature.

Symbolism is important in politics. To the protesters, withdrawal represents the burial of a hated element of government action. It also represents capitulation by authority. Recent leaked information showed Lam had wanted to declare the withdrawal much earlier but Beijing didn’t accept her suggestion. Presumably, surrender to public demand is not what Beijing wanted to give in to. Thus, stalemate until now.

The world looked on too and asks how things might end up for Hong Kong. International media has been sympathetic to the protests. “Good vs. bad” narratives make easy story-telling. Yet, after so many weeks of protests that have resulted in violence, vandalism, deep social division, and rising infrastructure and economic costs, the Hong Kong story is no longer so black and white.

Not unexpectedly, protesters and opposition politicians are standing their ground and saying that Lam’s olive branch is too little, too late. But it is the political middle—the majority of Hong Kong folks—who are now in the driving seat and have the responsibility to turn the crisis into a meaningful opportunity. While their trust is far from won over, they know it is unwise to reject what may be the overture to a new beginning. What they have to fully grasp is that it is they who have to make something of it.

Lam has asked her ministers to go to the community to start direct dialogue. She acknowledges that there is deep discontent within Hong Kong society and that grievances need to be aired. Ministers must prepare for an earful, and be prepared to suck it all up from the public with grace and humility. Let’s hope they can become empathetic listeners, as a longstanding complaint has been the arrogance, impatience, defensiveness and know-it-all attitude of officialdom. Let’s hope, too, that the more radical wing among protesters will let the town hall gatherings proceed without disruption. It is the political middle that must act as the sane foil against disarray.

To listen is the first step but solutions will take much longer, as issues relating to inequality, and reforming the bureaucratic structure and electoral system, are complex and need time. It will need both the opposition and pro-establishment politicians to work across the aisles to deal with vested interests so the people of Hong Kong can have a fairer share of the benefits.

Most U.S. Companies in H.K. Are Worried About Security Law

Then there is Beijing. It used to be that Hong Kong’s local tycoons had to be assured they could continue to make money because capitalists were seen to be essential to run the city’s economic system. Beijing’s answer was to give these and other pro-China interests sway through embedding them into the electoral systems that select the chief executive and half the legislators. Thus, it is in Beijing’s hands to loosen the grip of vested interests on outdated local policies.

It will require skillful surgery to reform Hong Kong’s political system. Beijing had a good proposal in 2014 to allow the direct election of the chief executive by the people after a nomination committee identified two to three candidates to run. This mechanism was there to sieve out candidates who might challenge Beijing’s authority over sovereignty. Chinese leaders weren’t worried about what local policies the candidates would promote—they didn’t want the risk of a separatist being elected. Beijing is more concerned today than in 2014, as the geopolitical conflict with the United States has deepened. China doesn’t want the unrest in Hong Kong to be taken advantage of by foreign forces.

Universal suffrage is not only another demand of the protesters but it is also the desire of Hong Kong society. The political middle needs to find a way to persuade Beijing to revive the 2014 proposal, which will not be easy in light of unfolding geopolitics. Another challenge has been the opposition politicians, whose default position is to reject Beijing’s entreaties. Local district-based elections are scheduled for November this year. There is an opportunity for fresh faces to come forth.

Protesters also want a commission of inquiry to look into this troubled period. They reject the existing police complaints mechanism for not being independent enough. The problem is they want the inquiry to look into those in authority and the police who may be at fault, but not at the violence and riotous activities protesters have caused. This is where the political middle can exercise wise counsel too. The existing mechanism has an fair-minded, excellent chairman—let him do his job.

Bashing Lam, chiding the police, and thumbing noses at Beijing have become the norm for venting deep-seated fears and frustrations in Hong Kong. Yet, in the hearts of its people, there is a longing for healing as ongoing protests are jeopardizing the city’s future. Unless people in Hong Kong can find some common ground, there is no basis for finding solutions.

“One country, two systems” is an experiment for the Chinese leadership, as well as the people of Hong Kong, amidst a continuing, changing world. Let the people of this amazing city show they are better than their current politics. 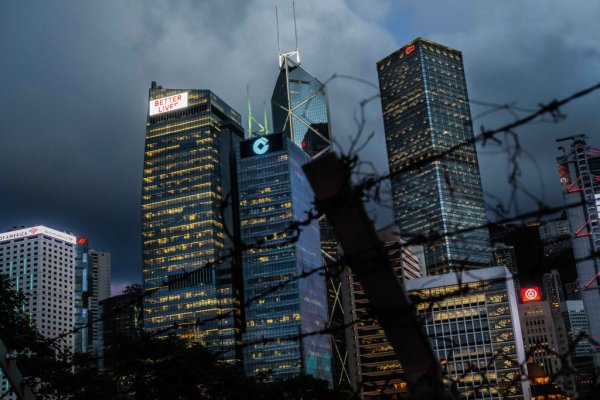 Most U.S. Companies in H.K. Are Worried About Security Law
EDIT POST