China Is Playing a Cautious Waiting Game in Hong Kong

Hong Kong’s protests continue. The unrest began in response to a proposed law that would allow Hong Kong to extradite its citizens to face prosecution in mainland China’s court system, a plan that stoked fears China could use the law to seize political dissidents and journalists deemed insufficiently compliant to Beijing. But when Hong Kong’s police launched a heavy-handed response to the demonstrations, the list of protester demands expanded to include police accountability and new protections for the territory’s democracy. On Sept. 4, Carrie Lam, Hong Kong’s beleaguered chief administrator, finally withdrew the bill. For many it will be “too little and too late now,” in the words of Joshua Wong, a key figure in the protest movement.

Millions have now taken to the streets over the past 14 weeks, and a few demonstrators have resorted to violence. Some protesters are setting fires. Others have thrown bricks and even fire bombs. Police have responded with tear gas, rubber bullets and warning shots of live ammunition. Thousands of university and high school students boycotted classes to join the protests. Some organizers have called on Taiwan to grant asylum for activists.

Beijing has so far taken a cautious approach. State media has issued increasingly dire threats, and Chinese soldiers have made a show of strength. But President Xi Jinping has avoided a military crackdown. That leaves Lam to try to calm things down. For more than three months, she has failed utterly, and leaked audio emerged recently in which she told business leaders during a closed-door meeting that she would resign if she could. If Beijing’s direct role in all this weren’t already clear, she’s also heard on tape explaining that she “unfortunately, has to serve two masters by constitution, that is the central people’s government and the people of Hong Kong.” Withdrawing the extradition bill is a victory, but not enough of one to end the protests.

But things will get more difficult for the protesters from here. The protest movement does not have unified leadership. Those who want demonstrations to remain peaceful have little sway with rioters. As with the gilets jaunes movement in France, poorly coordinated demands extend from the controversial to the impossible, making it hard for the movement to maintain public support indefinitely. President Xi can take his time, confident in the knowledge that people will have to return to work to make a living, and students will eventually go back to class. The economic damage to Hong Kong is already considerable.

There is also little useful international support for the demonstrations. European leaders can do no more than issue statements on the subject, and Donald Trump has tried to keep open hopes for trade negotiations with China by protecting his relationship with Xi. Trump has publicly expressed sympathy for Xi and his Hong Kong predicament, and he’s made clear he has no intention of siding with protesters.

That’s part of why Xi believes he can outlast the protesters, as China did following the Umbrella Movement five years ago. Some will be tempted to fault Trump for refusing to side with those who demand democracy, but it is Xi who has fueled these protests, by his refusal to allow Lam to resign and his uncompromising approach. Many in Hong Kong believe that Beijing means to fundamentally undermine their government. It’s clear that Xi won’t try to persuade them otherwise. 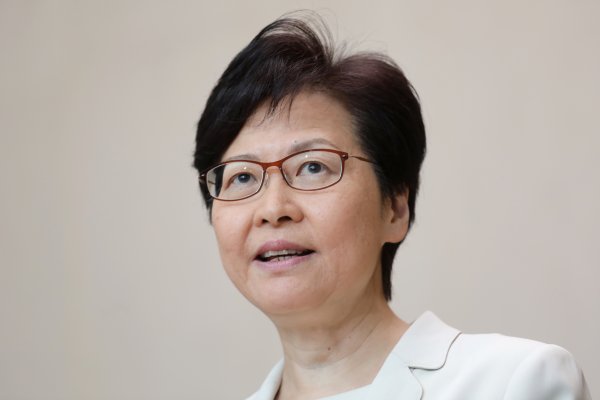 Hong Kong's Leader Sticks to Her Plan to End the Unrest
Next Up: Editor's Pick