The British cognitive researcher Gina Rippon tells TIME why male and female brains aren’t so different, explored in her book Gender and Our Brains

A popular notion has it that a human being’s most important sex organ is the brain. You say it’s our behavior that’s different; our brains are strikingly similar. Why?

This goes all the way back to Charles Darwin, who said that women are inferior because they have inferior brains and therefore they do not have the right to assume a powerful role in society. But the bottom line is there is no consistent pattern or structure which reliably characterizes the brain so that we could say, “O.K., that’s a female brain and that’s a male brain.”

But we don’t have to be talking about inferior or superior brains–just different brains.

Absolutely. Some critics have called people like myself sex-difference deniers, like climate deniers. There are sex differences that we should pay attention to, but the power that’s attributed to biology is what needs challenging. We have to pay more attention to how our experiences drive our brain architecture. It’s a bit like trees that grow on windy plains. Their biological drivers make them grow upward, but the winds make them twist or grow branches on only one side.

Is this what you mean by the “pink and blue tsunami” you write about in your book?

Yes, and it starts early. There was a BBC program called No More Boys and Girls, and they showed a classroom with a blue cupboard for the boys’ coats and a pink cupboard for the girls’, and no one knew why. It suggests that there’s something so important about your sex that you have to hang your coat somewhere else.

You’re open about the fact that you hate gender-reveal parties.

I’ve called them jaw-droppingly awful. Twenty weeks before children even arrive, people are already stressing about how important it is to be a boy or a girl.

A lot of parents work hard to raise their kids without strict gender differences. Can that compete with the gender messages in the culture at large?

Children are tiny social sponges, and it starts early. Little boys quickly pick up the fact that they shouldn’t cry–that if they want to be on the football team, then, in British terms, stiff upper lip. Is that what you’d call it in America?

“Suck it up” is what we’d say. It’s a little more vulgar.

If we can’t lay gender differences off on brain structure, surely hormones play a role, don’t they?

Rightly or wrongly, much has been written about women’s empathy and collegiality and how the world would be more peaceful if there were more female heads of state. Do you agree?

You spend little time in your book on transgender people. How come?

I don’t do research in that area, and I think you need to be a genuine authority. I’ve been contacted by transgender males or females who ask, “Can you put me in a scanner and prove my brain is male or female?” I say, I’m sorry, there isn’t any such thing. I can’t say your brain is all pinks or blues. In fact, I wanted to call my book Fifty Shades of Gray Matter. 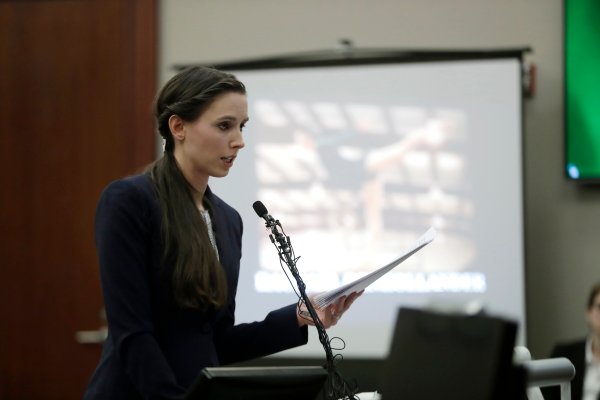 How the First Woman to Publicly Accuse Larry Nassar Approached Intimacy After Abuse
Next Up: Editor's Pick