Former U.N. Ambassador Samantha Power Has a Lot of Stories to Tell—and No Problem Talking

Perhaps noticing the mild panic in my eyes as my brain tries to process even half of it, she checks herself. “Sorry,” she says. “I’m going to get more succinct with the passage of time.” This was to be the only verifiable falsehood of the whole day.

Power, for those who’ve forgotten, was the human-rights shield-maiden who served in the Obama Administration, first as a member of the National Security Council and eventually as U.S. ambassador to the U.N. She was an unlikely pick because, after her years as a war correspondent, she was the opposite of diplomatic in the criticism she ladled out to prior U.S. administrations in her best-selling and Pulitzer Prize–winning account of the Bosnian war, A Problem From Hell. Also because she was memorably fired from then Senator Obama’s presidential campaign when she called Hillary Clinton “a monster” in front of a reporter.

Her new book, The Education of an Idealist, sounds like it’s going to be the tale of what happens when journalistic rubber meets administrative and political road, when the finger pointer becomes the appointee and finds out how hard it is to solve anything. Power dispenses with that notion in the book and in person. Instead, she insists, “It’s about how you get better at prosecuting your idealism.”

A combination of memoir, treatise and call to action, Education explains quite a lot about the passion that has animated Power’s endeavors. In her telling, both her parents were brilliant and loving, but her father was an alcoholic. A few years after they split and she moved from Ireland to the U.S. with her mother, who is a kidney specialist, he died, alone and broke. It suddenly dawned on Power that she had made scant effort to make sure he was O.K. It’s almost as if she decided, at age 14, never to make scant effort again.

While her life since then looks strategic and linear, Power spent her early years hopping onto different lily pads in the human-rights pond, from journalism to law to academia to nonprofits. Only after a friend from her Bosnian days mentioned that his former student was Obama’s roommate at Occidental College and could give him a copy of A Problem From Hell did things begin to stream into place, both professionally and personally. “But for Bosnia, there’s no book,” says Power. “But for the book, there’s no Obama. But for Obama, there’s no Cass. But for Cass, there’s no kids.”

Cass is her husband, Cass Sunstein, 64, another appealingly earnest nerd, former player in the Obama Administration, best-selling author and professor at Harvard. He’s in India for the week, lecturing. The kids are Declan, 10, and Rian, 7, both born while she worked at the White House. Power, 48, admits to bingeing on whatever time she can get with her children now, having been absent from more of their earlier life than she liked. Her working-mom anecdotes are not like other people’s: “I’m on the phone,” during talks on Russian sanctions, she says, “and Declan is frustrated yet again that he can’t get my attention and he marches away saying, ‘Putin, Putin, Putin! When is it going to be Declan, Declan, Declan?'” People laugh at that tale, she says, “in a way that I haven’t quite figured out.”

She brings the same skill set to bear on parenting that she uses in her work: doggedness, persuasion, a penchant for a story. Her son is an enthusiastic baseball player, and she coaxes him into spending some of his rare downtime before tennis camp in the leafy yard of their historic Concord, Mass., home, playing ball with her. A sports nut, she does not let him off easy, even calling an imaginary game as he pitches.

While she loves being with her kids and teaching, Power admits when pushed that her favorite job was at the U.N. Her successes there were not, on the surface, enormous. She did not broker peace in Syria, and she acknowledges that the Obama Administration backed the wrong horse in Yemen, which became even more of a human-rights travesty after President Trump took office and doubled down on that bet. “We are complicit in systematic war crimes,” she says of the situation there.

But the response to the 2014 Ebola epidemic proved that the same scramble-the-jets approach America used for warfare could be–and should be–deployed for humanitarian purposes. “So few threats stay confined within any one country,” she says, that it’s simply pragmatic to work with other countries to nip crises in the bud, even if it doesn’t initially seem to be in America’s national interest.

Her other abiding lesson from that time, the one she passes on to her students, is that it’s O.K., as she titles one chapter, to “shrink the change,” to not expect everything to happen at once. “Sweeping change,” she notes, “actually usually comes as a result of incremental changes.” By way of example, she points to a small initiative she undertook to try to combat the global rise of despots and the concurrent democratic recession. She and her team found 20 female human-rights activists who were in prison and set about bringing awareness to their stories. Eventually 16 were released. The number was tiny but demonstrated that “the most powerful superpower in the history of the world, if it puts its mind to it, and is respectful of culture and building coalitions, is able to use its tremendous leverage” for small but significant acts too.

Power has an almost endearing way of not quite understanding the effect she’s having on people. She seems oblivious as to how her height, blaze of red hair, deep voice, résumé or intensity might make others feel inferior. After leaving a prestigious position at Harvard to work in Obama’s senatorial office, she inadvertently came across a chat between two colleagues that described her as attention-seeking and snotty. “I was shocked,” she says. “I didn’t think of myself as high and mighty. I hated that that was the impression that I was leaving.” During our interview, she gets so excited about a story, she grabs my copy of her book to read the passage and begins to tear up as she reads her own words.

Refreshingly, all that diplomatic training has not made Power self-conscious or killed her taste for the overshare. She reveals some secrets of an unnamed ex-boyfriend–and puts just enough information in the book to make it possible to Google who he is. And when discussing how Obama’s upcoming memoir will perform compared to his wife’s monster best seller, she says wryly, “I’m sure he hasn’t noticed. He’s not competitive at all.”

In so many ways, Power is like America. She has impressive resources, a lot of high ideals and enough belief in herself to go it alone, if necessary. “I believe that individuals can make a profound difference,” says Power. “I’ve seen it.” Idealists have been having a bit of a rough time of it recently, jostled aside by ideologues and realists and autocrats, but Power is holding fast. Like the U.S., her record is not unblemished, but she’s still swinging. 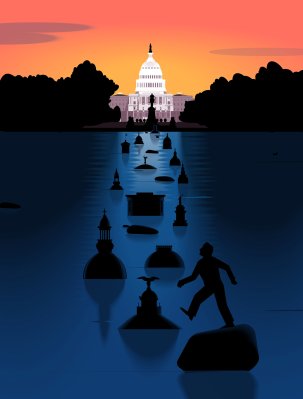 How State Races Starting This Fall Will Shape Congress for the Next Decade
Next Up: Editor's Pick