Trump's New Math: Inside the Plan to Flip Blue States in 2020

When President Donald Trump steps on stage for a campaign rally in Rio Rancho, New Mexico next week, even his own campaign staffers know he will be facing long odds. A Republican candidate for President hasn’t won the state since 2004, when George W. Bush beat John Kerry there by a margin of just 5,988 votes. Trump himself lost the state by eight points to Hillary Clinton in 2016 and his disapproval rating among registered voters there is a crushing 57%, according to the Morning Consult voter tracking poll.

Nonetheless, Trump’s campaign is betting it can win in New Mexico. Flush with cash, the campaign is planning to announce a state director and additional ground staff there in the coming weeks, a campaign official tells TIME. Internal campaign data has convinced Trump’s political advisors they can energize a slice of the state’s Hispanic voters to vote for Trump in 2020 by emphasizing Trump’s handling of the economy, border security and his trade confrontation with China. According to U.S. Census data, 49.1 percent of New Mexico’s residents identify themselves as Hispanic or Latino.

The move is part of a series of bets Trump is making to win states that went for Clinton in 2016. Trump’s son-in-law and senior White House advisor Jared Kushner says that voter data has convinced the reelection effort to fund robust field operations in a much larger number of states than in 2016. “I can see us very aggressively playing in 18 swing states,” Jared Kushner tells TIME, adding that in his view, the 2016 Trump campaign “seriously played” in about 11 swing states.

The broader bets, made very early in the election cycle, signify some defining characteristics of Trump’s 2020 effort. To win, Trump probably needs to come up with a different set of states than those that garnered 304 electoral college votes and carried him to the White House: public polls show his disapproval ratings swamp his approval numbers by at least 9 percentage points in his 2016 blue-to-red trifecta of Michigan, Wisconsin and Pennsylvania.

But Trump is flush with funds. With more than $100 million in cash on hand, Trump’s campaign has the freedom to look for unorthodox opportunities to seek out electoral votes in other parts of the country. That massive money haul will be used to mobilize support in states Trump lost narrowly, and in some cases broadly, and where his campaign feels there are enough untapped Trump supporters to tip the balance in his favor, his campaign says. “What matters is having the resources to invest in the best people and data to give the candidate every advantage,” Kushner says.

Trump’s political strategists say they aren’t carving out a new path to 270 electoral votes and instead want to run up the score. In the 2016 race, the Trump campaign didn’t have the luxury of time or a huge war chest. “Last time we had a better air game than ground game,” Kushner says. “This time, we’ve had a couple of years to prepare. We’ve refined our data and political operation. We’ve invested $50 to $60 million over the last couple of years to make the data significantly better.”

Not everyone is buying it. Trump’s sagging job approval ratings suggest to many political observers that the map-broadening is a reflection of a search for a long shot way back to the White House. Liam Donovan, a Republican strategist, says that the Trump campaign is right to be trying to get more voters to show up and to branch out into new territory. “There are reasons to compete in all these places,” Donovan tells TIME. But, Donovan says, “he’s not going to win any of these places if he’s still at 43 approval in the RCP average,” referring the average of Trump job approval polls published by RealClearPolitics.

It’s a strategy that veteran political consultants warn may end up being a waste of money, but if the political landscape shifts in Trump’s favor next year and the Trump campaign has people on the ground to capitalize on it, it might pay off.

To do it, the Trump campaign is targeting states that have high rates of support for Trump among Republicans. The bet is that they can ramp up turnout and swamp the votes in traditional Democratic strongholds. That strategy hinges on developing accurate data to find would-be Trump voters and using the months-long head start over a still-unknown Democratic opponent to build a ground operation that ensures those voters are registered and get to the polls. It also plays to Trump’s strength for whipping up controversies that energize his supporters.

Not all the blue states are long shots like New Mexico. While the GOP hasn’t won Minnesota since Richard Nixon took the state during his landslide victory in 1972, Trump lost to Clinton there in 2016 by a slim 1.5 percentage points. The Trump campaign hired a full-time state director in June and saw an uptick in Republican voter registrations in recent months.

The Trump campaign is also building out substantial ground operations in New Hampshire, where Trump lost by less than 1%, and Nevada, where Trump trailed Clinton by 2.4%. In both states, Trump was on the ticket with Senate candidates, Kelly Ayotte in New Hampshire and Joe Heck in Nevada, who distanced themselves from Trump. The Trump campaign and the RNC have told local party officials in those states they hope more unified support for Trump could help increase Republican turnout and tip those states for Trump.

In the case of New Mexico, as well as Maine where the Trump campaign is also starting early to hire ground staff, Hillary Clinton beat Trump by wide margins. But in both states voters cast tens of thousands of ballots for the Libertarian candidate Gary Johnson, votes the Trump campaign believes they can swing to the President in 2020. “We feel very optimistic about New Mexico,” Chris Carr, the political director for the Trump campaign and the Republican National Committee, tells TIME. The Trump campaign believes it can make inroads registering new voters in New Mexico who show a propensity for liking Trump. In recent cycles, the GOP didn’t launch a major voter registration effort in New Mexico or build out a large ground staff, Carr says, adding: “Republicans waved the white flag.”

The decision to target states like New Mexico, is based on internal campaign analysis of trends and data, says Bill Stepien, a senior political advisor to the campaign. “It costs a lot of money to invest in infrastructure and set up a headquarters. The campaign wouldn’t be considering doing that if New Mexico wasn’t a place where the numbers could add up,” Stepien said. In addition, internal campaign data indicate that messages about blocking late-term abortions, Trump’s trade war with China, and building a border wall resonate with a slice of Hispanic voters in New Mexico, as well as other sunbelt states like Nevada and Arizona, that could impact his vote tally.

“We are talking about some states that may not be in play a year from now, but the beauty of this year is that we can test, we can poll, we can see, you know, what takes root,” Stepien tells TIME. That is the benefit of running a campaign for an incumbent president, who launched his run for reelection on his first day in office, and has been setting up a campaign apparatus ever since. “We can see what staff are connecting with volunteers. We can see what states are adopting and executing programs that we are implementing,” he says.

“When we talk about these other states we hope to expand into, we are talking about adding to the president’s column. These are not alternative pathways to 270,” says Tim Murtaugh, director of communications for the Trump campaign. “We think we can win the states again where he won in 2016 and expand to new states and add them to the column.”

There is a group of voters the campaign calls “2018 disengagers.” These are voters who enthusiastically turned out for Trump in 2016 but sat home during the mid-term elections in 2018. Campaign data indicates those voters have “a high propensity” for going to the polls when Trump is on the ballot, Trump’s strategists say. This has led them to argue that even in states where Democrats made headway in 2018, Trump could still bring out a lot of voters in 2020.

The campaign’s political advisor, Stepien, says that is the case for Minnesota, which he sees having similar demographics and political leanings as Pennsylvania, which Trump flipped from blue to red for the first time in a presidential race since George H.W. Bush defeated Michael Dukakis there in 1988. “We like how the math works in Minnesota,” Stepien says. Both states have urban centers where Trump does poorly, but they also have large rural and blue-collar areas. The challenge in Minnesota will be whether Trump can generate enough enthusiasm across the state to overcome his low approval ratings among suburban voters around Minneapolis-St. Paul. “There is a pathway to victory in Minnesota, so why wouldn’t we invest there?” Carr says.

Democratic strategists have been watching the Trump campaign spend sizable amounts of money to find voters Michigan, Wisconsin, Pennsylvania, Florida and Texas. But they haven’t seen major financial investments in some of the states the Trump campaign says it is trying to bring into Trump’s column. “They do a lot of talking and they haven’t backed that up by their campaign strategy yet,” says Josh Schwerin, senior strategist and communications director for Priorities USA, a large Democratic Super PAC. “It’s one thing to see what they’re saying and different to see what they’re actually doing, where they’re investing their resources,” Schwerin says.

Based on what he’s seen, Schwerin thinks it’s unlikely Trump will gather enough momentum to flip New Mexico. “If they made dramatic enough gains that they could play in New Mexico, it would be such a big blowout that we wouldn’t need to have these conversations. It’s just not on the radar right now,” says Schwerin.

He may be right. The Trump campaign is betting he’s not. 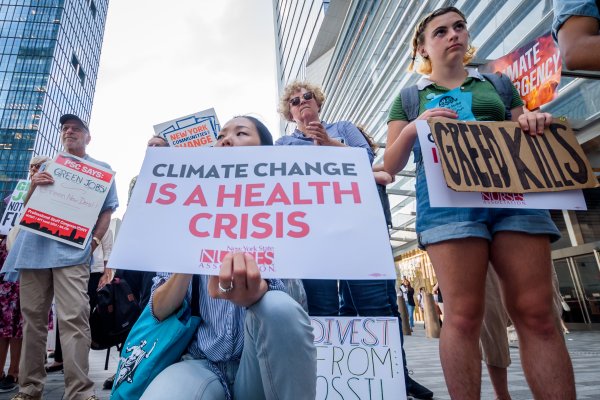 Six Takeaways from the Democratic Climate Town Hall
Next Up: Editor's Pick